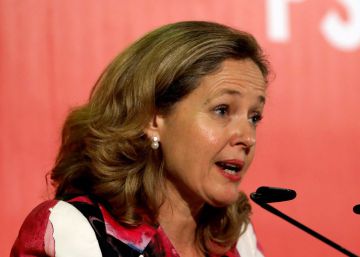 The Swiss Stock Exchange manager is willing to burn all the ships to keep BME. Six has already requested the necessary placet from the Government to approve the operation. Market infrastructures are key to a country and the last word will be from the Executive. But Six executives go one step ahead and, on a courtesy visit, have met with the acting Economy Minister, Nadia Calviño, to explain the details of the operation, according to socialist sources.

The meeting took place the day before yesterday and its mission was to publicize Six's industrial plan for BME, its technology and its employees. Jos Dijsselhof, CEO of the Swiss company, explained his plans to the virtual vice president if a government finally became the key to the vault of the pre-agreement between the PSOE and United We can. A spokesman for Six has declined to comment on this information.

Dijsselhof and part of his team had previously met with the Secretary of Economy of the PSOE, Manuel Escudero, with the mission of exposing the plans of the Swiss firm for the Spanish market. The meeting, usual between the ministry with all the parties involved in an operation of this draft, was cordial and focused on BME's strategy, its technology and its staff, of about 750 people, in the new group, according to knowledgeable sources of the meeting. Six has already left black on white in the note that it sent to the CNMV that will maintain “at least for a period of four years the current BME brands and the current BME business activities, its headquarters, the location of offices and its strategy in Spain". The mission of the summit with the current Minister of Economy was to expose that Spain will be a key country in Six's strategy, which is expected to grow in the EU and in Latin America.

Moreover, Six is ​​not only committed to maintaining the independence of BME, which manages the Spanish regulated markets as well as several alternative platforms such as the Alternative Stock Market (MAB) and the Alternative Fixed Income Market (MARF). Your business will be taken to Madrid clearing (compensation, in the Spanish stock market jargon), as explained by Six CFO Daniel Schmucki, in an interview published on Saturday, November 30 in CincoDías.

The objective of Six, under the advice of BME, is to grow this business area, prior to liquidation and registration and that accounted for 9% of the turnover of the company that Javier Hernani pilots in the first nine months of the year. On the road map are even sketched even purchases to compete with the two current major European clearing houses: LCH, controlled by the London Stock Exchange (LSE) with 80% of the capital, and Eurex Clearing, of Deutsche Börse.

The Ministry of Economy must give its official green light to the BME purchase operation within 60 to 90 days, with a prior report from the CNMV. The president of the supervisor explained that conditions may be imposed on the purchase. Thus, sources aware of the situation indicate that the authorization could be conditioned to a level of investments in Spain (Six allocates about 128 million euros annually) and to the extension of the shielding for the facilities and for the workforce of the national manager.

Six herself points out in a document that her current technology for equities, now owned by Nasdaq, could be replaced by BME's. "For three years, in conversations with regulators, Six plans to select the most optimal platforms to offer a customer-oriented service," he says in a note.

Covenant. The majority of current BME advisors will remain Spanish, as Six has committed. They are the ones who know the local business best, explained the financial director of the Swiss company. The Swiss company will also include two directors with Spanish nationality or Spanish residence. The key is that these two people will be proposed, in practice, by BME, which will create a nominating committee. Six's board of directors is now made up of nine people. Another of the key issues on which the Executive will be set to give his blessing will be corporate governance.

Stock price. The BME share closed yesterday at 0.68%, up to 35.48 euros, above 34 euros per share (2,843 million for the total) offered by Six. The market continues to discount a possible counterpart by Euronext, which has hired Rothschild and Société Générale to create a possible counter offer. The company headed by Stéphane Boujnah came to present a draft offer to the BME board.