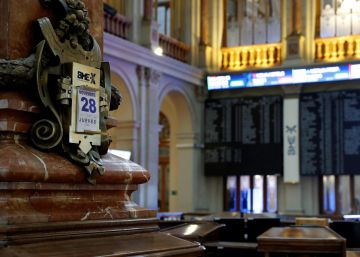 The Swiss Stock Exchange manager not only has Credit Suisse on its side, which will initially put the check for the 2,843 million euros of the bid presented at 34 euros per BME share. Alantra is your Spanish advisor and is in advanced negotiations to also participate in CaixaBank financing, according to financial sources. The cash that will be placed on the mat Six is ​​more than assured, and buyers want to make it clear that their offer counts, in addition to the approval of the BME board, with the approval of the home banking sector, former owner of the manager of Spanish markets

The three major Spanish banks are preparing to support Six's proposal, after BBVA and Santander are also ready to participate, as published by El Confidencial yesterday. Euronext has not yet counterattacked, but with these movements of the Helvetics it runs out of large Hispanic entities to attract to its potential offer. It does have powerful advisors, such as Rothschild and Société Générale, and is in talks with several entities to arm the financing of its potential counterpart. Among them, with Société Générale, Natixis, BNP Paribas and Crédit Agricole. The legal issues to scrutinize the rules of takeover bids are in the hands of Allen Overy.

The powers of each are already almost defined. BME is in principle favorable to Six's offer, although it does not rule out a counter offer from Euronext or even Deutsche Börse or the Hong Kong Stock Exchange manager, HKEX, although the latter's possibilities are limited in the face of EU reluctance to give entry to an Asian firm to one of the most important financial infrastructures in the Union. BME has Morgan Stanley as an advisor, while legal issues are provided by Latham & Watkins; The office of the Swiss is Linklaters.

Euronext is still studying the best formula to try to convince Javier Hernani, CEO of BME, and his entire board of directors, that his union would create a giant that would combine the parks of Paris, Amsterdam, Dublin, Lisbon, Madrid, Oslo and Brussels. He would be a true pan-European manager. The advantage of the Swiss, for BME, is that they commit to maintaining their brand for four years and will not make staff cuts, keep the current management team and even incorporate two Spaniards to their board of directors.

Euronext, in the last acquisitions it has made, in Ireland and Norway, has proclaimed that its model is federal, with the motto of "united in diversity". The chief executive of BME, however, has made it clear that a friendly offer will not only have to raise the price, as required by Spanish bid legislation, but must improve the industrial plan. Preserve the company's more than 700 jobs, as well as prevent the Spanish market from losing influence in Europe.

The political card, with the union of the capital market promoted by the EU, is played by Stéphane Boujnah, the president of the company based in Amsterdam but of French origin. With the data at the end of June, Spain would be the second Euronext market with a turnover of 148.2 million euros, from power to power with France, which achieved revenues of 160 million; at a considerable distance would be the Netherlands, the third market with 83 million. Its financial situation is more complex than that of Six. Its rating is A-, according to S&P, with a net debt that exceeded 739 million euros at the end of September and a ratio to the EBITDA of 1.8 times. The financial sources consulted indicate that the most likely scenario is that Euronext will decide, if in the end it does, by a mixed offer, with shares and cash.

Money. Despite the slight fall yesterday, BME titles are clearly above the 34 euros offered by Six, in anticipation of a war of opas. The new shareholders who have emerged in the Spanish company also contribute to this sensation. New York-based hedge fund manager Davidson Kemper has disclosed 1,594% of the capital. BlackRock has 3.15% and the Norwegian sovereign wealth fund, Norges Bank, controls 2,283%, compared to 1.05% in May. Nomura, meanwhile, has burst with 1.6%.

Sunrise. The chief executive of Euronext said last week in an interview with Boursorama that they were holding talks with BME and that, predictably, a possible offer would come in January. Corporación Alba, with a 12.06% stake, will have a lot to say.