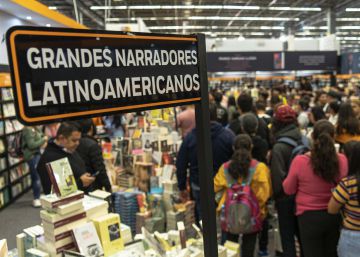 Every time Javier Cercas returns from New York, Berlin or Buenos Aires, his mother asks: "Who have you met with Ibahernando?" Ibahernando is the town of Cáceres in which the author of Anatomy of a moment before his family emigrated to Girona. "Surely I find someone from the town in Guadalajara," the writer ventured Friday in Mexico City while waiting for the plane to the capital of Jalisco. The FILIn fact, it always starts at a boarding gate. Siri Hustvedt, Elena Ramírez (his editor of Seix Barral), Juan Cruz (journalist of this newspaper), Cercas and two members of the jury of the Romances Languages ​​Prize awarded to David Huerta: Anna Caballé agreed on Friday at the 62nd of the Benito Juárez airfield and Miguel Casado.

This year, a regular of those waits was missing: Penguin Random House editor Claudio López Lamadrid, who died in January, to which the FIL pays tribute this Monday. Last November his main objective was to attend the reading of poems by Charles Simic and, when the time came, there he was, in the front row. López Lamadrid was one of those editors capable of recommending a book not published by himself to the scandal of the marketing chiefs. Even one of poetry. Even one of Latin American poetry. That's why it was nice to take advantage of the stopover in Mexico City to chat with him. It seemed that instead of going to the FIL, it came from there.

The 11 hours of flight from Europe give for a good time of reading and the passengers of the door 62 had chosen theirs well. Siri Hustvedt came reading The Myths We Live Byby Mary Midgley; Elena Ramírez, Fox 8by George Saunders; Juan Cruz, The orderby Javier Melero and Javier Cercas, Collapseby Manuel Vilas, and The river falls dirtyby David Trueba. As a finalist for the Planet, Vilas has been on a promotional tour with Cercas for weeks, but this time she has stayed in Spain. In addition to his friend and director of the film adaptation of Soldiers of Salamis, Trueba is one of the characters of The shadow monarch. In that book the two traveled by car to the center of the world (with permission from Bilbao always and, these days, from Guadalajara, Mexico), that is, to Ibahernando.

Pastora Soler: “The virus has taught us that we are more capable than we think”