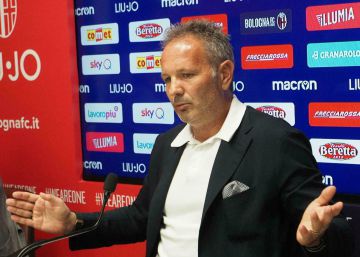 Serbian former coach and now Bologna coach Sinisa Mihajlovic announced Saturday at a press conference that he has acute leukemia. He will remain on the bench, according to the head of the club's medical services, Gianni Nanni. "It can be cured, it is a disease that can be defeated and that will allow you to work, you will be able to interact with the players, except for some moments in which you will have to be absent.The therapies of today are effective: it is a disease that can be defeated in times brief, "Nanni explained.

Mihajlovic, 50, appeared on Saturday to communicate the reasons why he did not attend the team's rally. He did it in a press conference in which he could not control the tears. "I want to be clear, before I started the preseason I said I had a fever, but convincing my wife of that was complicated because I have not had a fever in the last 40. We counted that because that day I had to do more tests, which determined that I have acute leukemia, it was a very hard blow, I shut myself up at home to reflect and cry … I saw my whole life go by ", said the former Sampdoria player, Roma, Inter and Lazio. "Those of today are not tears of fear, but of respect for this disease, I will defeat her by looking her in the eye, on Tuesday I start therapy, I do not see the time: the sooner I start, the sooner I will end. It can heal, "he continued.

The technician wanted to qualify that until a few months ago was fine. "I did some tests on February 28 and everything was perfect, I've been training until the end of May, playing paddle for two hours a day without any problems, I did not feel fatigued and did not have red spots, then I started doing some tests and they came out anomalies, "he explained. "I do a lot of revisions, prevention is fundamental, I know because my father died of cancer, if we had not done the tests, we would not have discovered that I suffer from leukemia." Everyone thinks that a big and strong guy like me is impossible to have something happen to him. But nobody can think that it is indestructible. "

Betis: Joel Robles, one more in training after defeating the coronavirus