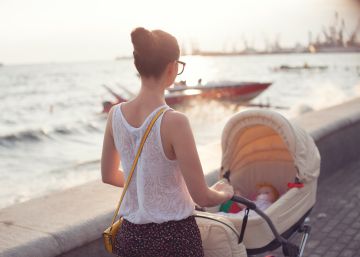 The Government has rectified the dysfunction created with the decree law that extended paternity leave that caused single-parent families, instead of winning, lost a week in cases of multiple births or birth of a child with a disability. Following the complaint filed by at least two mothers, the National Social Security Institute has issued a criterion by which it recognizes the right of these families, the vast majority headed by women (83%, according to the INE), to enjoy the two additional weeks of paid leave, which in the case of having two parents have to be shared between them.

"It is fair, they have solved a mistake they had in writing the decree law," says Cristina Prat, one of the mothers who detected the problem and filed a protest, on June 25. "But the serious thing is that when legislating, they will forget that they exist other family models ", review. The Government admits in its press release that "the new design of the benefit (…) gave rise to an unforeseen situation".

The new decree extended paternity leave from five to eight weeks since last April 1, and it will progressively equate them to those of maternity, until reaching 16 weeks for each one in 2021. The text went on to configure the paid permissions as non-transferable individual rights for each parent, and established that the two additional weeks for multiple births or of children with Disability should be divided between them, so that single mothers were entitled to one week instead of two, as was the case before. In practice, "the one who was harmed was the baby," who lost a week of care, explains Carmen Flores, president of the Federation of Single Mothers (Fams), who estimates that the measure has affected about twenty families.

This situation is what is now corrected by Social Security, which recognizes that "it has not been the purpose of the legislator to deprive, in these cases, the children or children under one week of care to which two parents or parents would have had the right to exist. not having mediated the regulatory reform. " Thus, in a document sent to the managing centers, the agency establishes that "when the protected situation results in the suspension of a single employment contract, this suspension (…) must have the additional duration of two weeks provided for the precept, without applying the subsection that introduces the distribution between the two parents. " In addition to births, it applies to adoptions and foster care.

The measure is already in force for all new cases. It also applies retroactively to all births from April 1, although if benefits are already resolved, affected families must request a review from the National Social Security Institute to be granted this additional week.

According to the Government, in this way "the right is equalized between both family models, so that the sons and daughters – or minors – can receive the necessary care regardless of whether they have one or two parents." However, for both Prat and Flores, this measure is limited to rectifying an error, but does not prevent the "discrimination" suffered by children of single-parent families, which when matching maternity and paternity leave in 2021, will have "the half of family care time, "warns the president of the Fams.

"We should work to make it the babies who have the right," agrees Prat, a single mother by choice of a three-year-old child and two four-month-old twins. "I do not say that mothers alone have 32 weeks of leave, which would be ideal, but they should be able to give those 16 weeks to a grandfather or another person to take care of the baby," he asks.