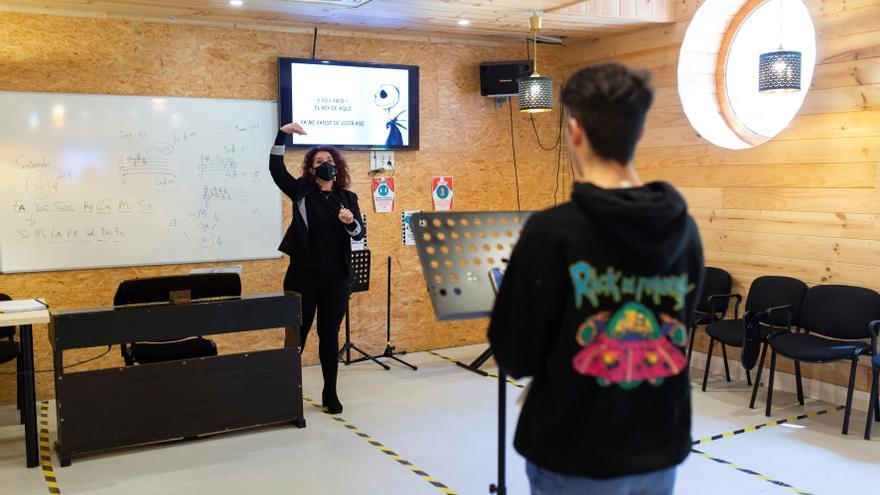 Madrid, Sep 18 (EFE) .- Singing and musical theater schools have had to use their imagination to adapt and remain open in the midst of the pandemic, and now they hope that the evolution of the virus will allow them this course to overcome their current mode of survival and to be able to return to work in conditions.

Until now, they have been surviving with solutions such as video call classes, the exchange of teachers or the loan of classrooms between them to get ahead.

"Sometimes they ask me how I'm doing, now I say that surviving, next year I hope to say good," explains Coral Antón, owner of a musical school, to Efe. These teachers hope to increase the number of students, organize more face-to-face classes and that their students can participate in their end-of-year presentations.

His musical theater school "lost 40% of its students during the quarantine," he says. Like other musical theater and singing teachers, he claims that his students could no longer afford to pay for classes and others, especially the older ones, did not like classes online.

At the time the quarantine began in March of last year, the singing and musical theater teachers quickly adapted to continue teaching their classes by video call, although the classes lost quality when held virtually.

María Zapata, singing teacher at the "Katarina Gurska" academy, explains to Efe: "The problem with the video call classes is that the microphones on my students' computers did not pick up all the harmonics and it was more difficult for me to give the classes."

At the "María Beltrán" musical theater school, Kun Beltrán comments to this agency that brainstorming among students is encouraged, but when their classes were held by video call, the students "were not so encouraged to share."

But there are also positives. The teachers emphasize that the students who did continue these classes online during their quarantine indicated that they allowed them to escape from reality and improve their mental state. Blanca López, a singing student, explains for example that her classes during the quarantine were a "distraction from the pandemic" and "a fun part of her routine."

Additionally, some of the teachers admit that virtual classes have made them realize that they can be extended to people all over the world, helping them keep going. "We have seen that thanks to technology we can give classes to people from other parts of Spain and even Latin America," says Kun Beltrán.

Many face-to-face classes of musical theater and singing were resumed in September of last year, but in compliance with the health measures imposed by the Government.

"In the classes of this course we had to wear a mask, use hydroalcoholic gel and maintain a safe distance from the teacher," explains Blanca López.

Coral Antón says that although some students have recovered in face-to-face classes, "the schools have had to reduce the capacity of their classes to follow the restrictions," which does not help their economic situation.

Students and teachers appreciate being able to have direct contact with each other, although they believe that some of the sanitary restrictions affect the quality of teaching.

For example, María Zapata comments that she likes to put her hand on the students' diaphragm to tell them how to improve their breathing when they sing, and now she cannot do that.

Some singing and musical theater schools have survived by renting their rooms for other kinds of classes. "We were renting our classrooms for English classes for a season," says Kun Beltrán.

All professionals lament the absence of aid as private entities. "Some schools have succeeded by forming a community and helping each other," explains Coral Antón.