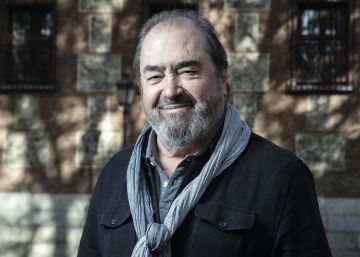 Singer Patxi Joseba Andión, artistically known as Patxi AndiónHe died on Wednesday in a traffic accident on the A-15 road in Soria, when the Land Rover he was driving off the road. Andión, also a sociologist, actor and writer, was 72 years old.

Last November, the singer-songwriter published Lobicán Time (produced by Lemuria Music and distributed by Warner), the disk with which commemorated 50 years since he launched the first one, Pictures, in 1969. The musician presented the album, with 10 new and unpublished songs, on November 25 in the Madrid room Galileo Galilei.

Andión was born in Madrid but grew up in Azpeitia (Gipuzkoa), a municipality where his family moved, one of Republican sentiment that suffered the prison of Franco. He was part of youth groups such as Los Dingos and Los Botos before leaving for France, where he lived in French May in Paris. In an interview with EL PAÍS last NovemberAndion, representative of the protest song, with more than 500 signed songs, was recognized as one of the singer-songwriters who found themselves misplaced when democracy arrived.

Despite his confessed status as an atheist, Andión married in May 1976 in a hermitage in Navarre with Amparo Muñoz, named Miss Universe two years before and the one he had met in the recording of The other bedroom, from Eloy of the Church. The marriage lasted just over a year, although he officially divorced in 1983. He remarried with Gloria Monis.

After playing in the eighties Che Guevara in the musical Avoid and publish the discs Love first and The open balcony, Andión made a musical break, due to the direction his career had taken: “I found myself in a place I had not planned. I was spoiled by a multinational, but you are adapting to what the success asks of you: the songs that the public wants in the concerts, what catches the attention of the communicators … Then, you realize and say: 'I do not want this '. You can do two things, stay in the system or leave for a while, which is what I did. And come back, if you have things to say. ”

Language academies help to understand the localisms of reggaeton

Rozalén: “We are very cowards when it comes to putting ourselves in front of the mirror”

The Filmoteca launches the inventory of Spanish cinema with almost 6,000 titles