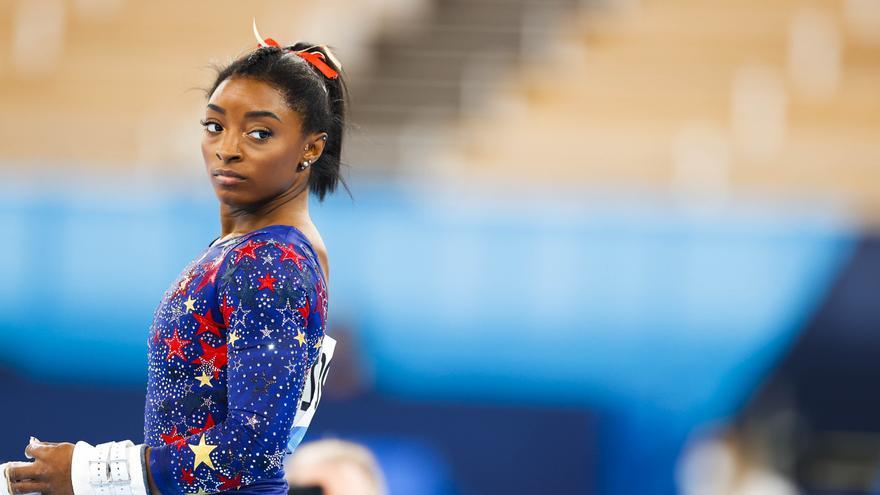 A deadly twist was missing. The leap of the multi-time American Olympic champion gymnast Simone Biles was good, but it was not the absolute difficulty exercise that she had told the judges she would do. It was missing a key twist. Minutes later he withdrew from the Tokyo Olympics team competition. And later he confirmed that his abandonment was due to psychological problems: "I am not injured. I just have a small wound in my pride."

The withdrawal in the middle of the Olympic test of a world star like Simone Biles joins the one that, just a few months ago, starred the Japanese tennis player Naomi Osaka. Osaka, at that time number two in the world, left Roland Garros due to the anxiety caused by the excessive attention and the obligation to answer dozens of questions from the press. Two calls for attention to the, many times, hidden mental health. At the time, former swimmer Michael Phelps, a 28-time Olympic medal winner who suffered from depression, wrote that Osaka could have "saved his life" by deciding to withdraw even if it meant not participating in the tournament.

"In top-level athletes it draws a lot of attention because the view from the outside is that they are supermen or superwomen", explains the psychologist and sports coach Francesc Porta. The image is that of "people capable of being in the top 10 worldwide, who seem to be unable to have a bad time and have to manage stressful situations like any neighbor's child," he adds.

Biles has assured almost nothing more than leaving the gymnastics pavilion that "we have to protect our minds and our bodies. This is not simply going out and doing what the world wants us to do", putting the focus on the importance of also attending to aspects of psychological health. "Mental health is more important than sport right now," finished the four-time Olympic champion.

The athlete has thus not hidden the origin of her abandonment. It has broken, in a way, the taboo surrounding mental health. "The elite sport is making us see that taking care of our mind and our psychological state is essential for any activity that requires performance", analyzes the psychologist Porta.

The stigma and misunderstanding that results in keeping mental health problems a secret had an example in March of this year in a forum as public as the Congress of Deputies. The PP deputy, Carmelo Romero, shouted at the representative of Más País, Íñigo Errejón, "Go to the doctor!", when Errejón asked the President of the Government, Pedro Sánchez, about the mental health of Spaniards affected by the COVID-19 pandemic. His mockery, with gestures included, was applauded by his colleagues from the Popular Group.

Romero ended up apologizing, but he had illustrated one of the added problems of mental health. The question of the deputy of More Country that provoked the mockery of the PP parliamentarian was not misguided. In fact, just a few months later it was found that COVID-19 has brought a bill in this regard by causing the 50% increase in emergencies for disorders of this nature in adolescents. This same Monday, an investigation for the European Commission has revealed that the sfeeling of loneliness has grown throughout the European Union due to the pandemic. After deputy Romero's mockery, Errejón later replied: "Never again the stigma or shame."

The psychologist and researcher José María López Chamorro insists that "athletes are seen as superstars, as if they were not human. We forget that they are people with their fears and concerns and the mental health taboo makes us think about this as extraordinary situations that we do not expect, it seems that we are talking about something else, as if they were not people ".

Although little is said about it, Spain deals with relevant mental health problems. It is the country with the highest consumption of anxiolytic, hypnotic and sedative drugs in the world in relative terms. In 2020 it exceeded 91 daily doses per 1,000 inhabitants, according to the latest report of the International Narcotics Control Board. Suicides are the main cause of violent death in Spain. 3,671 people died by suicide in 2019, according to the INE, 3.6% more than the previous year. The rate is 7.79 suicides per 100,000 inhabitants, below, of course, the European average of 11.9.

Porta understands that the issue goes beyond the top-level sports environment. "In the world of work and organizations it is also totally stigmatized. People who may suffer some disorder or difficulty in exercising their profession, problems often eat them up and are not able to explain themselves to those responsible. It happens in all areas" , Explain.

For the high-performance psychologist Lorena Cos, that top-level athletes like Simone Biles take a step forward like this Tuesday has a positive value: "That elite athletes like her naturally express that they have had an anxiety attack helps to give it visibility and that anyone can feel comfortable talking about it in a similar situation. "

López Chamorro agrees by underlining that "when you are the benchmark for millions of people, you can promote and break the stigma of mental health in society in general, but also within sports. There are many boys and girls who have this pressure in sports for being the best and having a hard time managing pressure and expectations. Seeing their big stars saying these things, seeing that nothing happens, that the world is not ending, is very positive. "

In this regard, Porta explains from his experience that "young people are increasingly open to being able to speak with a psychologist, see what strategies and resources can be applied to be well. Since the pandemic I am noticing a change, especially that parents get in touch more than before because they care about their athletic children. "

The cases of Biles or Naomi Osaka have been thunderous for taking place in the middle of a great sporting event for which both had prepared thoroughly. For psychologists it is no coincidence that there were two women.

"It may be easier for them to speak because they are more demanding profiles," says Porta. As for the strategies to deal with it, "I do not differentiate between male and female, but from the outside, women are more assertive and express themselves in a more natural way."

López Chamorro understands that "sport is an expression within society, with what is under the rules of society in general, that is why it is important to apply the gender perspective in general."

Cos does not believe so much that it is "a question of gender" as of "culture and education", and returns to the idea of ​​the elite athlete as being invincible. "This is what sometimes makes it difficult for them to show aspects that they may feel weaken them, such as the mental part."

Biles is now waiting to see how it evolves to present itself, or not, to the rest of the finals that it has pending. Lorena Cos hopes that "the world of sports will become aware of the importance of the mental part and its value in competitions of this caliber". Meanwhile, the American athlete has offered a forceful summary: "Now I have to focus on my mental health."