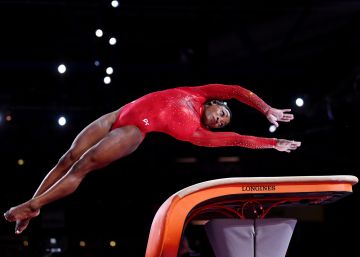 Three finals, three victories. This is how the journey of Simone Biles, the best gymnast of all time, in the Stuttgart World Cups. After winning the gold for teams on Tuesday and the individual on Thursday, the Olympic champion has hung on Saturday the gold in jump, the first final for devices that she disputes. It is the 23rd medal in the World Cups, which debuted in 2013, and matches it the record of a gymnastics legend, the Belarusian Vitaly Scherbo. He still has to play another three finals before returning home.

The jump is next to the ground exercise, one of the great specialties of Biles, a gymnast with a perfect physique for this sport: she is small, very strong and tremendously agile. To win his 23rd medal, the 17th gold, Biles has made two of the most difficult jumps for women: the Amanar – a Yurtchenko with a double pirouette and a half – and the Cheng. In both it has been impeccable. Biles climbs more than anyone, spins faster, lands on the mat without deviating and hardly moving.

In the end, with an average of 15,399 points, all its rivals have been clearly imposed. His countryman Jade Carey, the only one who threatened the victory of Biles, has achieved silver (14,883) and British Ellie Downie, bronze (14,816). Mexico's Alexa Morena, trained by Alfredo Hueto, the coach who guided Gervasio Deferr's entire career, finished sixth after stepping out of bounds in the first jump.

Biles has competed in Stuttgart much more relaxed than was seen last year in Doha, when she returned to the great competition after taking a year off after the tremendous Olympic effort that made her one of the stars of the Rio Games : won four gold medals and a bronze. She continues to increase the difficulty of her impossible program every year, but she is seen smiling more often, talking with her classmates and with her coach, the French Laurent Landi. In short, enjoy.

Scherbo's record is one of the few left to beat. She is already the gymnast with more absolute world titles -five-, with more medals in a world cup, with more golds. It has ahead the feat of repeating Olympic title in Tokyo.

Terrible accident of an aerobatic plane in Guatemala