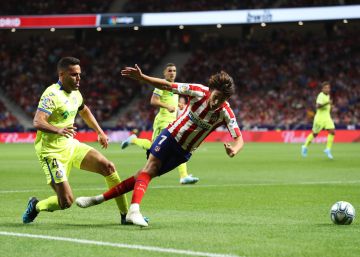 At a traffic light on Arcentales Avenue, just over 500 meters from the Metropolitan, an image summarized the expectation generated by the Atlético premiere. Two children by the hand of his father wore João Félix's shirt. The boy made the play of the game with one of those races that contain the weapons of some of the greats, a pipe, the brake and the acceleration to blush Arambarri and Bruno. The two creaked at the skill and gear shift of the Portuguese rookie. Every meter that flew through the area generated a domino effect that raised fans from their seats. The action came already in a rough match and ignited a fan who gave himself to his new star since the warm up. The arabesques were jellyd in the rounds and even seemed to thank him for the balls that fell in the stands when he tasted Oblak from afar. When he injured the club, the people applauded the boy as if he expected something back. And he did it by returning the ticket price with that great getaway.

“It was his first league game, complex, with a rival that moves well tactically. In the first half he was not allowed to show his game, but in an individual action in the second he showed the power he has. We hope that these situations appear more with continuity, ”Simeone judged his new phenomenon, which justified his change in the 65th minute for a cramp,“ but that's fine. ” “The play has been a show. They have given him enough in the game, but it has been a great world player play. It has conditions to arrive ”.

Simeone, satisfied with the result and the delivery of his boys, made an in-depth analysis of the meeting: “It was an important first half, with passages where we felt comfortable, we circulated quickly of the ball to take advantage of Trippier's depth and we put ourselves in advantage. In the specific details we could not take advantage. After the expulsion of Molina, the one from Lodi came immediately. Then the penalty failed. We lacked more control in the final stretch. ”

Both Simeone and Bordalás spoke of the double expulsion and contradicted themselves in the explanation of the new norm that sanctions the stomps behind with red. In Vigo, Modric was already expelled for a similar action on Denis Suarez. “I do not understand the expulsion of Jorge Molina, they were giving us a talk with a professional referee and it made it clear to us that this rule only applied if there was intentionality. Modric and Jorge Molina are two players that the referees know are incapable of having that intentionality, ”Bordalás complained. Simeone had another version. “The other day they explained that intentionality is not valued. Unfortunately for players it is difficult to stop, but with the stomp a three month injury may appear. ”

Saul also defended his coach's version. “We were told that intentionality does not count. For me it should be a bit shaded, I don't think Jorge Molina was going to injure ”. The steering wheel escorted Koke to Thomas on the 4-3-1-2 that Simeone arranged. “We went very well to the game. We found spaces against Getafe, which is very difficult because it plays with the lines very close together. But we have won, which is what counts, ”concluded Saul.

More than 1,200 Espanyol fans will travel to Wolverhampton