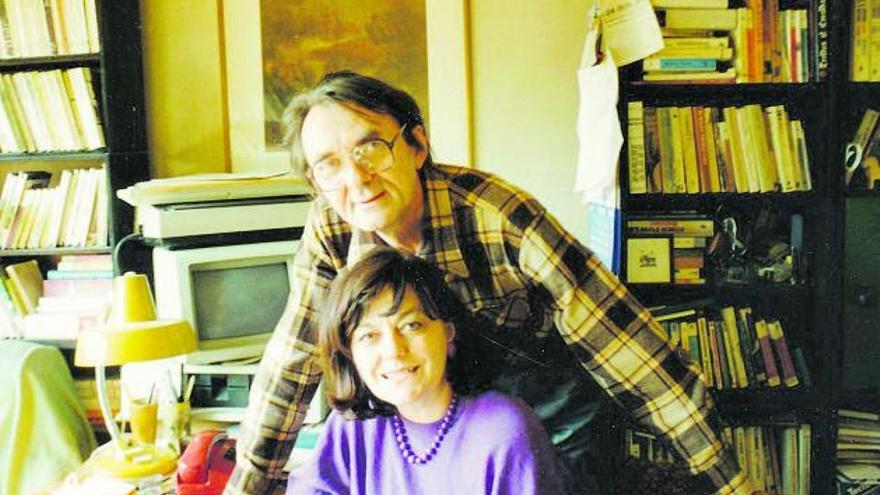 In the town of Săpânța, in northern Transylvania, there is a cemetery that avoids the fetishism with which the European imaginary has translated the region. Called The Joyful Cemetery, Cimíriul Vesel, its uniqueness is the content of the tombstones, created by the poet and painter Stan Ioan Pătraş. Carved in wood in the shape of an Orthodox cross, each one houses a small drawing and a text related to the daily life of the disappeared person, and even the type of death received. Pătraş thus captures the anecdotes of the deceased person, reveals excesses and follies, establishing a kind of popular justice in which the dead person will be eternally marked as drunk, quarrelsome or satrap.

The cheerful cemetery reflects a rurality that has its literary echo in Ionesco's theater of the absurd, where the delirium of reality, survival and humor survive the dramatic events that recent history has reserved for the country. A costumbrista scenography endows death with a narrative, while revealing the Romanian character, whose existence mixes sacrifice, suffering and celebration, in equal parts.

Barely 20 kilometers away, in Sighetu Marmației, there is a stage that dialogues with death in a radically different way. The Memorial to the Victims of Communism, and to the Resistance Memorialul Victimelor Comunismului şi al Rezistenţei testifies to the torture and suffering caused by the Romanian communist regime. The museum seeks to resist oblivion, and vindication. A must-see place in the north of the country, each of its cells, converted into rooms, crosses the seams of those who suffered the being and being of that stage dominated by the Securitate, in which death would become, in many cases , in the only exit.

The Memorial was created in 1997 by Ana Blandiana and Romulus Rusan, two intellectuals who embody the latent memory of a traumatic period. Both, a couple in real life, suffered from the contempt of the regime due to their literary and investigative activity, through censorship, which led to a resistance that would lead to the creation of the Civic Action platform in the 90s: the germ on the one that lays the foundation for the creation of the Memorial, and also maintains a road map of what it means to conclude a stage of repression while still demanding justice.

In the case of Ana Blandiana, her figure has another meaning that transcends social activism. She is considered one of the most important poets of the 1960s generation, along with authors such as Nichita Stanescu and Marin Sorescu. Likewise, she is a consecrated figure on the current international scene, along with Mircea Cartarescu, and it is no exaggeration to place her on the literary path traced by Svetlana Alexiévich, Dubravka Ugrešić, or Herta Müller, also accompanied by the lyrical atmosphere of Szymborska and the resistance of Anna Akhmatova. Blandiana represents that Eastern Europe that continues to export tenacity, questioning and commitment.

Activism for memory contrasts with a poetic work where the lightness of the gesture, the outline of silence and not saying saying are identified with a kind of aesthetic proclamation. Facing poetry from suggestion: «Poetry does not have to shine, it has to illuminate».

What is said or how it is said does not matter, but rather what is suggested through what is said. The eloquence of poetry is measured not so much by the words as by the silence between them. The ideal is to express little and suggest a lot.

poetry against the current

Otilia Valeria Coman (name that she will change to Ana Blandiana, so as not to inherit the persecution of which her father, an opponent of the communist regime, was a victim) published her first poem in a magazine at the age of 16, but soon she would be denounced and prohibited from "the daughter of an enemy of the people" published again in Romania (she would also be denied the right to study at the university). However, although the ban will be revoked, the poet will again experience censorship and rejection on two occasions. The last one in 1984, when four poems published in the magazine Amfieatru diagnose a generation that was slowly brewing the 1989 revolution. One of these texts demonstrates the certainty, and the literary quality, in Blandiana's commitment:

I believe that we are a vegetable people.

From where, if not, the calm

With what do we wait for the deciduous leaves?

From where, if not, the courage

To let ourselves slide down the slide of sleep

Until close to death,

that we can return

To be born again?

Has anyone ever seen a tree rise up?

His first book, Primera persona del plural, was published in 1964, followed by sixteen more. An extensive work that in recent years has increased its presence in the bookstores of our country, after the definitive commitment made by two publishers with a long-distance distribution. However, his first publication appeared in 2007 on the occasion of the Cosmopoética Festival and the anthology Harvest of Angels. Since then, they have been published in Spain in Pre-texts: My country A4 (2014), The sun from beyond and the reflux of the senses (2016) and October, November, December (2017), and recently in Visor, in 2021. : Variations on a given theme, and First person plural / The vulnerable heel. Galaxia Gutenberg has added to the visibility of his work, and compiles in An archangel stained with soot, also published in 2021, three of his fundamental poetry collections: Predatory Star (1985), The architecture of the waves (1990) and The clock without hours (2016), together with the poems that appeared in the Amfiteatru magazine, and different reflections on poetry, belonging to the essay La poesia entre el silencio y el sin (2006), which was also published as an annex to Mi patria A4. It should be pointed out that in most of the translations, except for Harvest of Angels, Viorica Patea and Natalia Carbajosa have participated.

Part of his narrative work is edited in Spain, in this case by the publishing house Periférico: Proyectos de Past (2008) and Las Cuatro Temporadas (2011), where he combines the confessional tone of a realistic newspaper with the incursions of a visionary imagination. In his texts he often uses the fantastic to denounce the dramatic situation in the country.

Permanent candidate for the Nobel Prize, and translated into more than twenty languages, the intensity of Ana Blandiana's poetic voice has as its main lyrical mark the meditative element, a diluted reflection that does not attract the philosophical element, but immerses us in the subtlety of a dynamic thought that moves in the limits of dream and reality.