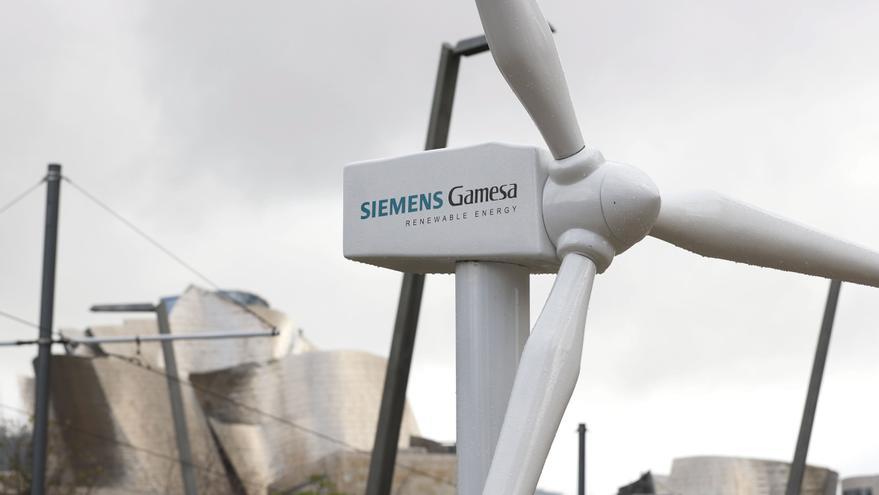 “sorgekind”. With that German word, which means "problematic child" but can also be translated as "headache", the Siemens-Gamesa company in Germany is described. The company, which emerged from the merger in 2017 of the German Siemens Wind Power and the Spanish Gamesa, was born to become a world leader in its sector: wind energy.

However, for some time now, the results do not accompany the wind turbine company based in the Basque municipality of Zamudio. 2021, without going any further, was a "complex year", as they recognized in the firm last November, when it was time to present adverse results.

In the past year, the firm recorded losses amounting to 627 million euros. Given that the German technology multinational Siemens is the majority shareholder of Siemens-Gamesa – it controls 67% of the shares –, in Germany there are many eyes on the performance of the company specializing in the construction of wind turbines. Moreover, given the circumstances, there are not a few who seem to be running out of patience with a company that in 2020 had to face historical losses (918 million euros).

The economic slowdown caused by COVID-19 that year, added to problems associated with the supply chains of components and raw materials, are the key elements to explain why Siemens-Gamesa does not have a favorable wind. There are also concerns about the apparent difficulties that the firm is having with its 5X turbines. offshore. Siemens-Gamesa, as described this week in the economic daily Handelsblatt, is facing a “long-term” crisis.

In this context, there are plenty of analysts and commentators in Germany who seem focused on the fact that, in the face of the "headache" that Siemens-Gamesa represents, the company's solution involves Siemens taking control from Munich. Own Handelsblatt He has been realizing the “pressure” exerted by investors” who think like this.

“Of course a Siemens Gamesa integration would be the best solution. This is how the management team of Siemens Energy must be able to closely monitor Gamesa's processes", he pointed out to the Handelsblatt in this sense Vera Diehl, of Union Investment, a company based in Frankfurt dedicated to the investments of the German bank DZ Bank. Siemens Energy is the company of the Siemens group dedicated to energy and the owner of the Siemens-Gamesa shares.

Earlier this week it was also made known that Deutsche Bank welcomes the purchase of Siemens-Gamesa shares in the event that Siemens Energy decides to launch a takeover bid (OPA), as reported by the economic agency American Bloomberg. At the time of writing these lines, the Siemens-Gamesa share is paid at around 17.38 euros. A year ago, the value of the company title was 35.64 euros.

Rumors about an acquisition are not new. Last May, Siemens Energy was already forced to deny that it was planning to take control of Siemens Gamesa. From the direction of Siemens Energy it has been pointed out that everything has already been said and that there is no room for rumors about the takeover bid. Jochen Eickholt, a member of the Board of Directors, has raised with the Handelsblatt that although there are "problems" in the services offshore, Those “problems with projects and new developments have nothing to do with the ownership structure” of the company.

Eickholt was alluding to a situation that tends to be seen as a problem in Germany: Siemens-Gamesa is not subject to control by Siemens Energy beyond the control it may exercise through the Supervisory Board.

For investors, such as those represented by the analyst Ingo Speich at Deka Investment, a firm that manages the investment services of the Teutonic bank DekaBank, "through a complete integration [de Siemens-Gamesa, ndlr.], Siemens Energy could govern the company more easily, open structures and reduce the paths of decision making”.

It remains to be seen if these types of opinions end up permeating the German Siemens-Gamesa parent company. What seems clear is that the situation of the Zamudio company "puts Siemens Energy under pressure", according to the recent analysis they make in the German economic weekly Wirtschafts Woche.

Because despite the "hopeful" character in the current context of climate change that is still recognized in Germany to the commitment to renewable energies that is Siemens-Gamesa, for the moment Siemens Energy can only hope to keep the numbers of its turnover in positive . As they point out in the Handelsblatt, "business with gas and steam power plants is going according to plan."