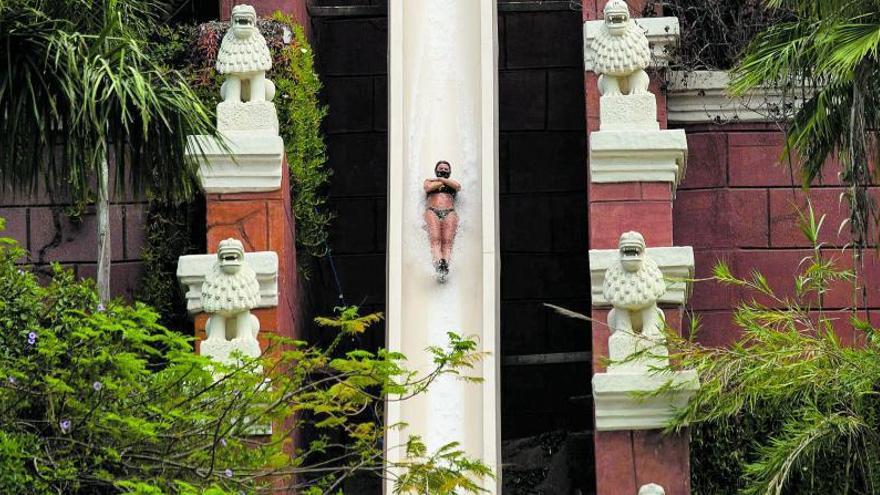 The pre-opening took place on Friday, only for customers with an annual card. Christoph Kiessling, vice president of the Loro Parque Company and director of Siam Park, acted as host in a conference attended by the mayor of Adeje, José Miguel Rodríguez Fraga: «This is a very symbolic reopening and important news for the Canary Islands and Spain . It is the message that we are beginning to walk towards the new normal, ”said the councilor on Siam beach.

Christoph Kiessling explained that opening the complex to less than 30% capacity is an exercise in responsibility. “We are going to grow together with our people.” The increase in the opening days, first, and the capacity, later, will be gradual, as the conditions of the pandemic improve. The purpose is “to keep the park under control,” emphasized the head of Siam Park, excited about the return to activity.

“I am excited that the tourist will return and that in July or August we will have them here again,” he replied hopefully in the economic reactivation. He is convinced that the source markets – English and German, above all – “really want to travel and have the financial resources to do so.”

“Thanks to my father”

Overcoming 14 months of cessation of activity has a very important economic cost that Siam Park surpasses «thanks to the president, thanks to my father, who made an emergency plan. There was a fund that has allowed us to keep the animals, their caretakers, the gardens and the entire park in perfect condition. With the opening, the Loro Parque Group is back in full operation, since the Puerto de la Cruz zoo opened on May 1. “My father turns 84 this year and he never thought he would see his business closed for so long,” he said.

Siam Park is back, the best water park in the world

Siam Park reopens with its usual attractions, including the second wave pool, especially for children and with attractions that encourage motor skills and the practice of sport. Users will find facilities in perfect condition thanks to “background maintenance” carried out during the last 14 months, to the point that “the park is new, with the advantage that the vegetation is larger and offers natural shade.”

For all this, the water park has 140 workers who perform all the tasks. To this, the group adds another 280 employees who work with Loro Parque. In ERTE there are less than 50 members of the staff. “It is the personnel that we need to return to normality and activity all week.” Something that Christoph Kiessling, director of Siam Park, hopes will happen before the end of the summer, “if everything goes well. There is a lot of desire ».

Sanitary measures are very noticeable in Siam Park. “The water park is the safest environment within the covid environment,” he emphatically expressed. He explained that chlorine acts as a disinfectant. Throughout the enclosure they have enabled pergolas from which, permanently, vaporized water with chlorine dioxide sprouts, “kind to the body, but a good disinfectant.” Customers pass through these spaces when they move between attractions, at which time they must wear the mask, not at the attraction. “If the customer wants to wear one, we have neoprene masks for sale. It is not for one-time use and can even be carried on the slide ”, as it is suitable for use in the water.

Siam Park is back, the best water park in the world

Siam Park’s main market is Spanish, followed by English; the tourist from eastern Europe is the one who spends the most and the canary, the weekend customer. “We continue to work for excellence,” he added. For seven consecutive years, Siam Park received the Travelers’ Choice Award, the award that accredits it as the best water park in the world, in the opinion of users through the TripAdvisor digital portal.

The European Star Award for Best Water Park in Europe for the ninth consecutive year or the Park World Excellence Award, which recognized it in 2019 as Best Water Park of the Year, are other recognitions that make it the most recognized and decorated park on the planet. Among its attractions, Singha is ranked number one in the world, followed by The Dragon and Tower of Power, the 28-meter high slide. To that is added Siam Beach, the beach with artificial waves.