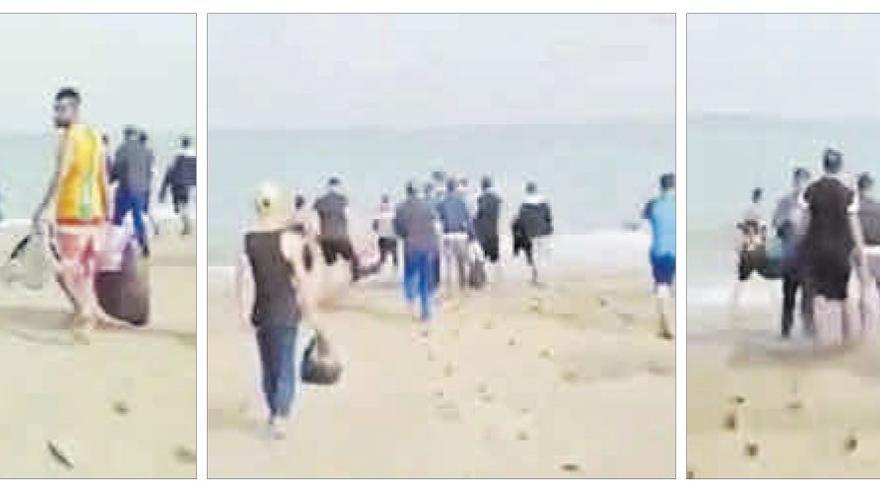 Monday, September 27 on the beach of Cap Djenet, in the province of Boumerdes, to 169 nautical miles from the south of Mallorca always sailing north. It’s ten o’clock. 17 young Algerians They accelerate their passage through the sandy area to reach the boat that awaits them in a bit of a hurry. The sea is calm and the sky overcast. They are called Betebiche, Belaada, Karim, Hellis, Samir and Islam, among other names. Some already know each other and speak loudly among themselves because the wind prevents them from hearing each other. All dressed in summer street clothes and without any warm attire, raincoat, wetsuit or neoprene, as if the journey they face was a mere formality, they queue up without any order next to a small boat of little more than six meters, eight at the most, waiting for them on the shore.

It’s just a fiber boat with an outboard motor, a sky-blue hull without any additional equipment only suitable for coastal navigation in calm seas, with which no minimally seasoned sailor would venture further.

But they will do it for a dream and to escape the poverty. The boat is held by the skipper by the bow so that the current does not carry it away and the young people can embark. There is a rush to get on board and a rush to avoid the coast guard who would end their adventure before it began and who patrol the entire coastline that goes from Cap Djenet to the port of Dellys to interrupt the migratory route to the Balearic Islands, through which 1,819 migrants have passed in 120 boats, a record number never before reached.

As the 17 young people walk through the sand, a person who is not going to embark records the group on video. It is important that all the crew members come out, that their faces are seen well, although the 17 young Algerians do not pay much attention. Nobody thinks to upload that cut to social networks. It is not for that. According to the testimony of an Algerian social mediator who from Spain helps migrants to get ahead and puts them in contact with their families in their locality of origin in Algeria, is about a graphic tool so that young people can be identified in the event of a fatal misfortune, a practice that for safety and taking into account previous experiences is already repeated in all the trips by boat that are organized from the Maghreb country.

An accelerated start of the trip and with what is on

The group began the journey on the beach of Cap Djenet without warm clothes, in a hurry and in a small boat that could not fit more than six people.

For this reason, it also explains the mediator, to whose testimony this newspaper has had access, the young people who come on board are asked not to change their clothes until they touch land, because sometimes families are confused if they have to identify a person with clothing that is suitable for them. strange and with which they do not remember their relative on the day of departure.

Maybe that’s why one wears the red and black shirt of the Milan, The team of soccer Italian, and another crew member, a striking yellow short-sleeved T-shirt with a vertical stripe across the back on which the word can be read Warriors.

But on the morning of September 27, at ten o’clock, no one was thinking of misfortunes in the wide sandy area of ​​Cap Djenet, with its very white sand. The sea was leaden, a steel blue, but it was calm and the crossing seemed auspicious. It was about embarking and sailing north, without breaks, without stops, just north, until reaching the coast, 48 hours of navigation maximum, if difficulties arose perhaps a little more. The coasts of Ibiza, Mallorca or Cabrera would appear from the bow on the horizon, the paradise reached, if difficulties did not arise. At least that was assured by those who had ventured the same route before them.

The climb aboard the 17 young people to the small boat already denotes the precarious conditions of the trip. A small boat with capacity for six or seven people get on board a total of 17. And while they take their tiny place in the cockpit, the boat rocks violently from port to starboard and the pattern that holds the bow still from the ground prevents it from overturning on the same shore. With all the passage crowded on board, the waterline sinks two feet, and the boat begins its journey awkwardly. There is so little space on board that any change in the crew’s position could capsize her even in calm seas.

But this time nothing happened as expected. The journey lasted for eight interminable days, until October 4, when the boat with the 17 young Algerians was wrecked seven miles south of the Cabrera archipelago. And its crew members were spotted at sea by a yacht that urgently warned Maritime Rescue, with a balance so far of 14 people rescued, two missing and one deceased, the one located yesterday.

Nothing else is known so far about the circumstances of the trip and the difficulties that the 17 Algerians went through during the eight days of the journey, until the shipwreck seven miles off the coast of Cabrera. Just a fundamental question on any sea voyage. The situation at sea began to get complicated on Sunday, six days after setting sail from Cap Djenet beach, when the very saturated boat should have started to see the Balearic coast, already with a considerable delay. And early Monday it became impossible in that area of ​​the Mediterranean for the small oversaturated boat, when a storm front swept the entire area, causing a storm with waves of more than five meters and north winds with gusts of up to 80 kilometers per hour.

Another boat left the next day, September 28, from the Algerian town of Figier with the same course, the coasts of the Balearic Islands. But until now nothing is known about the boat or its crew.

The group started the journey on the beach of Cap Djenet no warm clothes, in a hurry and in a small boat in which no more than six people could fit.