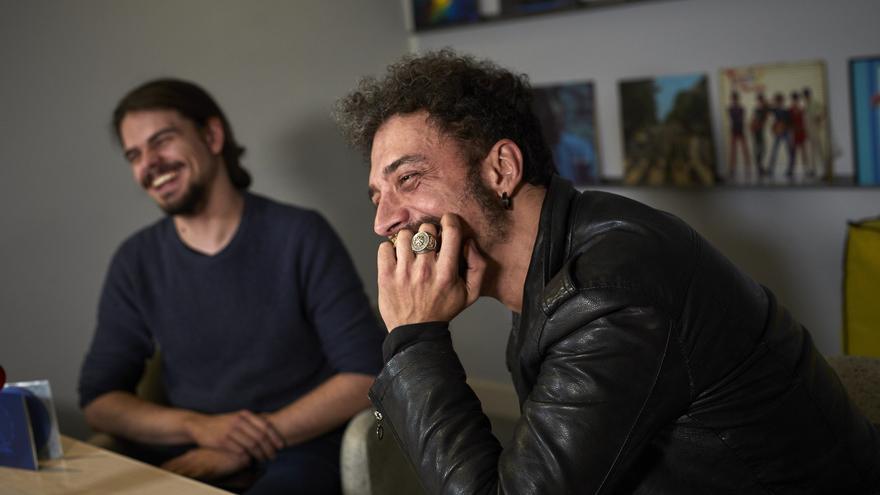 Shinova has already dressed up ‘Good luck’, her sixth album concocted halfway between pre-pandemic and confinement in a setting to which they owe part of their essence. Both the creative process and the context have finished rounding a record that, like the Ferris wheel that illustrates the cover, manages to form episodic pills a speech that elevates the ‘shinovez’ to the maximum exponent.

In the process of presenting this new installment, Gabriel de la Rosa and Erlantz Prieto, vocalist and guitar-chorusist of the band, gut, in an interview with EP at the headquarters of G News, the how and why, admitting that Although the uncertainty was a starting point when taking the album out for a walk, the “brutal illusion” has made everything start to work.

Although they admit that the consumer’s desire for music after a year without live shows has ended up blowing up the equation of the success of their album – number two in sales, leading the list in the case of vinyl -, they assure that now the general public “brutally supports, more than ever” musical creators.

Although much of the album “had been conceived before the pandemic” – up to three songs were recorded before the state of alarm – Erlantz acknowledges that songs have had to be discarded due to their content. “It seemed that they were talking about the pandemic without talking about the pandemic. It could be a conflict or cause people to classify the disc at too specific a stage,” he says. Still, the spirit of ‘Good luck’ does not part with an “optimistic and cheerful” tone after more “sad and dark” times, a suit that “has been good” for the band.

Shinova showed the album first in Vitoria blindly and a week later in Bilbao after having been presented in society. On the first date, they released the entire repertoire, and they felt that feeling of “those first times when you don’t have a record and you want to see what can work.” And in Vitoria we got a very nice surprise, because the songs connected fast with the people“, assures De la Rosa, who relates that in the Bilbao gig,” already with the album presented “, they were able to see how people” already knew the songs “better than the band itself.

“It was very nice, starting at home that way is to remember. It was a first time full of many first times”, emphasizes the vocalist, with words of thanks to all the technical part that makes the magic of the live show possible. “It is an honor to work close to people who are made of this wood.” Erlantz shares feelings in honor of the workmanship that is not seen in a concert. “There are very professional people who will always try to get things done,” he celebrates.

Given the uncertainty of the festival calendar, he assumes that there will be a process of adaptation in what he understands as “a year of transition“where it will be necessary to discard appointments of 20,000 people while waiting for scenarios” more similar to the normality that was known “before the COVID.

The first sensations after the confinement were also special. De la Rosa recalls his first pass after confinement, a date in Gijón. “The first five minutes were very hard, shocking, also because of the contained emotion of months. But the music continued to work among the people. We did not see the mouths of the public – because of the masks – but we did see the eyebrows, and that gives you an idea of ​​how happy they were, “he assures, amortizing that” one misses sweating and licking “at a concert, although taking for granted that” music, of course, makes its way. ”

Colmenero and the new textures

‘Good luck’ has the signature in the production of Manuel Colmenero, a touch that they recognize as “an irruption” that has taught them “a lot”, taking them through hitherto unknown paths. “We have played with sound textures, even at the level of the lyrics, managing to carry a more direct message without neglecting how that message is launched. It has been an album of much learning,” says Shinova’s voice.

For his part, Erlantz ends up admitting that the stoppage forced by the circumstances of last spring affected the band’s roadmap for the better. “It was good for us to slow down, take time to be able to work and bring songs forward. Without those two months, songs like ‘I owe you a song’ would not have come out. There are songs that would not have been born, “he assures. In this line, he assumes that the break helped round out the final product.” I think it is inevitable to think that what happened has conditioned the album. It has been something very strong. Context always plays a role. ”

“Now there are more people behind us”

With this story after the last few months, Gabriel de la Rosa celebrates the “beautiful response” that has been received from the public after just a few weeks since the launch. After releasing up to six pills before the official release of the album, something that has helped to promote the album as a whole “more powerfully”, they have discovered in this form of delivery by installments a way to alleviate the lack of contact with the public.

In short, De la Rosa assures that after the last months they have detected more people supporting the group. “I think so, we have grown. We did not know to what extent and now we are seeing it. Many people write to us and sales have grown faster than ever. Everything is working and that indicates that, yes, there are more people behind.”

At this point, according to the prism of Erlantz, the good luck that the album title illustrates extends to the context in which the pandemic caught the group. “We were lucky and he caught us at the time of composing, and allowed us to have a break. If it came to us with the newly released album, the band would have been in trouble. ”

Nine hours, a van, no concert

Among the worst chapters caused by the pandemic situation, De la Rosa does not want to stop citing the failed concert that, on a stage that he prefers not to reveal, it could not be carried out despite crossing the country in a van for nine hours. “We traveled nine hours, we arrived at the place … and they tell us that it is suspended. Although all security measures were guaranteed. No one came to greet us, they canceled the concert, but that same night we saw a multitude of bottles and a party in that place. Shall we put down the instruments and play here? ” wondered, ironically, the vocalist.

After this reflection, he assumes that, although both the music industry and the regular concert audience “know what’s out there”, the rest of the scene “has demonized culture in such a way that it is capable of overthrowing a production that gives of eat a lot of people. ”

De la Rosa argues the optimistic tone of the repertoire of ‘Good luck’ with a confession that revolves around ‘I owe you a song’, which was the last song composed to complete the album. “I’ve never said it … but I doallied everything at once. I remember writing that topic with tears. The tap was turned on, and while I was finishing writing, I couldn’t stop crying, “he admits.

As a moral, Shinova’s voice celebrates that “from such a hard moment, a beautiful song came out.” “From the darkest days, beautiful things come out,” the interview ends.