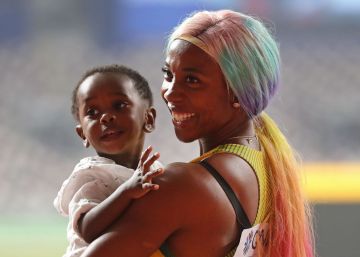 Until last year, Shelly-Ann Fraser-Pryce, 32, was for Jamaica and for the world the Pocket Rocket, affectionate nickname that pays tribute to both its supersonic speed and often its body (1.60 meters high / 52 kilos of weight, mostly muscle), and thus appears in the statue that in his honor was erected at the entrance of the National Stadium of Jamaica, in its Kingston. But since last year the Jamaican athlete is, for everyone, Rocket mom. It is since returning to the tracks after a 2017 in which she was pregnant and gave birth to a child, Zyon, on August 7, just the day after the 100m final of the London World Cup, and saw the Tele how the American Tori Bowie took the gold, and that vision perhaps accelerated the arrival in the light of her son and his return, which to his life added more life, and at his speed even faster.

"The break for motherhood suited me very well," he said after winning well on Sunday night. its fourth 100m world championship with a mark, 10.71s, which is the fifth in history and the best in the world in the last three years. “It had been 10 years without stopping. My body was already asking me for a break, as he reminded me at the Rio Games, where I ran injured. I told my coach, Stephen Francis, and he said he thought it was perfect, to take advantage of the pregnancy to rest, and be careful not to get too fat. ”

Like all sprinters Often, Fraser-Pryce is a bullet at the exit and in the first 60 meters, the distance at which the maximum speed is reached, its strongest point, but still the specialists were surprised that it was as strong as the numbers showed Registered Fraser-Pryce and his big horse-tail wig in the colors of the rainbow - a concealed advertising for his other business, a hairdressing salon in Kingston and the commercial representation of a cosmetics firm - ran the first 60 meters of the final in 6,81s, a brand with which it would have beaten for 11 hundredths, about 10 meters, the world record of 60m on indoor track that the Russian Irina Privalova has held for 26 years. And the second classified, the British Dina Asher-Smith, 23, an intellectual with a degree in closed history with a work on the influence of jazz music in the integration of the black community, with about 60m in 6.91s , it would also have beaten Privalova as, officially, it broke the record of the United Kingdom with the 10.83s that made it the first British to climb a podium of speed in 36 years.

But, in reality, what gave the 100m title and an extraordinary mark to Mama Rocket, and what makes it exceptional, was its ability to maintain the maximum speed achieved, a quality that athletes are not supposed to its size and yes to the big ones, like Marion Jones, former basketball player (1.80m) who, when she achieved her 10.70s, passed the 60m in 6.85s, four hundredths slower, but then made the final 40m in 3 , 85s. Fraser-Pryce was not so much, but the 3.90s with which he completed his 100m were the best mark of the last 40m of all the finalists, two hundredths better than silver, Asher-Smith. The final speed of a big one.

Won his fourth gold, Fraser-Pryce, also double Olympic distance champion (2008 and 2012), gave his Zyon in his arms the return of honor to the deserted stands (2,800 spectators attended the Sunday session, working day, a 23.20, local time) and indifferent to the cold stadium like a stone, with its air conditioning. And nobody pulled her. The IAAF says that it understands that few people go to the stadium because it has set the schedules thinking more about the global television audience, of which it does not give figures. And he adds that his presentation of Show, with games of lights typical of discos of the 80s, it is very cool on TV.

Fraser Pryce and all the athletes do not care so much about the lights as the heat and the fuss of the public, so necessary, and those who did not attend missed one of the best 100 in history, a final that returns dignity to the history of a test that is still ominously headed by the figure of Florence Griffith, the world record holder since 1988, the lead years of athletics, with an impossible 10.49s. Everyone reminds Fraser-Pryce that she also had a problem with doping because in 2010 she was sanctioned six months by a positive with oxycodone an opioid (analgesic for very strong pains that many athletes usually use) and she always responds, and He says he took it because he couldn't stand the toothache.

And he smiles, and his teeth shine.

The Shelly-Ann Fraser-Pryce Olympic and world shine began in Beijing 2008 and was developed coinciding with the splendor of the great Jamaican star of speed Usain Bolt, his Kingston countryman and the slums, who now regrets that his figure It was so big that he ate the rest. "I'm proud of her, how she has returned to the best level after being a mother," he said in L'Équipe Bolt, one who retired right at the London World Cup in which Fraser-Pryce went into labor. “She is shy and does not like to talk about her very much, and if the public had done so she would have discovered a great character. It has been too long in my shadow, and it was a shame, but that is why we cannot underestimate it. ”