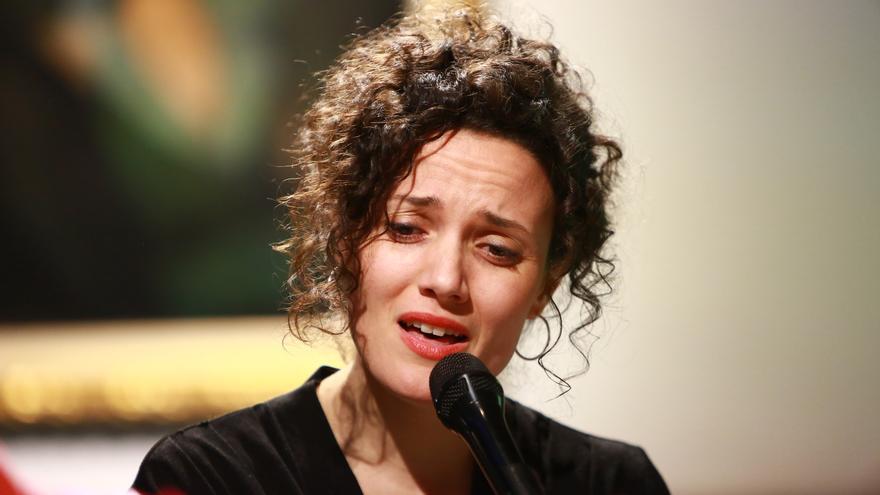 The job comes to the pianist and composer Sheila Blanco because she breathed music in her house. Her parents insisted that the three daughters go to the conservatory, so she spent years combining her training in journalism with the academic piano.

Surrounded by copla records and The Beatles, at the age of 15 or 16 she began to sing and compose, and now defends the universalization of musical education, not by virtuosity, but by the (mental) doors that open the domain of musical language.

In 2016 he discovered the women of the Generation of 27 and his life turned upside down, he became obsessed with them, he tracked them down and the vernacular verses of some of them composed notes that envelop and magnify them. Now publish Singing to the poets of 27 , an album in which he offers piano and voice, rhythm and compass, to poems by Carmen Conde, Ernestina de Champourcín, Concha Méndez, Elisabeth Mulder, Pilar de Valderrama, Margarita Ferreras, Josefina Romo Arregui and Dolores Catarineu. It can be heard on Bandcamp.

Why do you say meeting these women changed your life?

I have always been very fond of literature and I really liked the Silver Age. Six years ago, being steeped in the feminist cause, a person like Tània Balló released a book and a documentary called The without hat [Espasa, 2016] that says that in Spain there were women in the 1920s writing, sculpting and painting. I was very happy and at the same time I was outraged because no one had told me that THEM existed (in capital letters). These women were (today) missing, and since I wanted to read them I had to investigate. And when I read them they moved me so much that I was encouraged to put them to music in tribute and for people to know them. Music makes something like poetry accessible to everyone, which sometimes does not interest all audiences.

Las sinombrero is a label that Tània Balló gives to the creative women who were in Madrid, related to the Lyceum Club Femenino, well-off economic position and companions of well-known men such as Lorca, Dalí, Luis Cernuda, Rafael Alberti or Pedro Salinas.

The thing about ‘Las sinsombrero’ comes from the story that Maruja Mallo, Margatira Manso, Lorca and Dalí were walking through the Plaza de Sol and at one point they took off their hats as in an act of rebellion, as if to stage the uncovering of ideas . Maruja Mallo says that when people saw them, they threw stones at them and called them fags.

Although the term is modern and we have begun to use it now, those women were sisterhood. They were friends, they exchanged correspondence, they had a very keen sense of freedom, of the advancement of times, of modernity. There are other women who are not ‘sinombreristas’, for example, in my project I sing lyrics by the Catalan poet Elisabeth Mulder. Now when I go on tour I research the women poets of that city and I talk about them at the concert, and I even compose them. On June 4, I am going to Palma de Mallorca to play, and I have discovered the poet Maria Antònia Salvà, from the middle of the 19th century, she is a kind of Emily Dickinson but in Mallorcan. I’m going to see if I do something with it because what I have read I am passionate about.

The male names of the Generation of 27 are clear and learned. But for women we still have a lot of field to sow. To start with textbooks.

They were the first generation of women writers, but the war and the Franco regime completely curtailed the steps forward of women because they were women. He made them invisible and annulled the story. Those women who existed and who shared printing presses, recitals, parties and readers with them are hidden because the Franco regime wants them in the home of caregivers, of breeders. He wants them quiet and it is time for the textbooks to talk about them.

Even in the 1920s, not everything was easy for female writers. There is the case of Elena Fortún, whose husband did not want her to write. He came to write the Celias in the enclosed sink. There are publishers that are doing a good job of rescuing them, such as the Renacimiento publishing house. In your case, how have you had access to the poems of the women that you have set to music? Have you found them reissued?

In five years it has changed a lot because now they are beginning to be published. In 2016, when I began to investigate these women, I went to Wikipedia and there were no photos, no verses, very few traces. Totally lost women. I had to go diving to second-hand bookstores, and thanks to Ediciones Torremozas I found some things. This publishing house, which I invite you to follow, was founded in 1982 by the poet Luzmaría Jiménez Faro, and is now directed by Marta Porpetta with the idea of ​​publishing women whose works were lost. I owe a lot to Marta, she is now a friend and she has helped me find a way to have the permission of the families of these poets to set their work to music.

In the concerts he tells who these women are beyond the biographies and works, he narrates curiosities that have been happening to him in the research processes. For example, what happened to the poet Dolores Catarineu?

He couldn’t find anything about her and he was getting desperate. And the coincidence is that I was teaching singing to a student and I told him that I was looking for Dolores Catarineu’s poems and he said: “From Aunt Lola? It was my best friend’s aunt.” So he put me in contact with the descendants and I went to Dolores Catarineu’s house, where the windows overlook the Sorolla Museum.

His great-nephew gave me a pendrive with all the unpublished work and I have moved it into editorials so that it comes out, and yes, they are going to publish it. I have musicalized her Love, from the collection of poems Love, dream and life, From the year 36, I have composed it as a chotis. In this poem the object of desire is the man, the muse is him, and it is very nice to see that she is the creator and the muse is her boyfriend. We have to change the idea that the passive muses are always them. In ’36 Dolores was no longer the muse.

And what has she rescued from Concha Méndez?

She was passionate about the sea and has a poem called Swimmer. I also am. Concha won several swimming championships in San Sebastian, without wetsuits or anything in the frozen waters of the Cantabrian Sea. The poem says: My arms / oars. / The keel: / my body. / Timon: my thought. / (If I were a mermaid my songs would be verses). The music I have composed sounds like water.

In Ediciones Torremozas we find Margarita Ferreras, who edited Fish on landWhat have you done with your verses?

Margarita is from a town in Zamora, she comes to Madrid because her father is orphaned and they were a distant family of Dr. Gregorio Marañón. That made the girl have access to education, and she was even a member of the Athenaeum. Fran Garcera is a researcher at the CSIC and he is the one who prepared this edition. Last year Garcera discovered where Margarita Ferreras was buried: in a convent in Palencia when she died in 64.

Margarita had mental problems and a very tortuous relationship with her mother, and machismo riddled her because they called her shameless for being a very free and advanced woman. Fish on land It is a very sensual collection of poems, I have musicalized a romance called by the Olive green with a very Lorca tone, because that’s the way the poem is.

This project has a didactic part that could dialogue very well with work in institutes, for example. Are you performing alone in concert halls or are you planning to take it to other venues?

Well, I have even played in reading clubs, libraries and of course in institutes. The students previously work on who these women are and their collections of poems, and then I go. Poetry requires an educated look, like a palate that gets used to it. Sometimes it is difficult to approach the kids with poetry, but with music it is easier for them to enter. I’m playing very large and very small venues, but the important thing is that people listen and get to know these women.