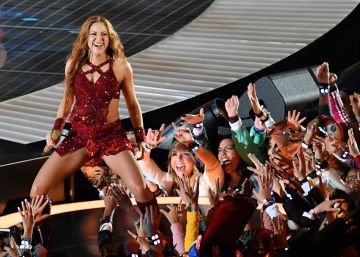 A whipped world tile. A therapy, champetúo pride, picotero. That was, in the words used in the Colombian Caribbean, what millions of people saw in the Super Bowl when Shakira He danced on Sunday to the rhythm of what in Colombia is known as champeta.

They were only 28 seconds but could be keys to arouse greater interest in this genre that has marked the rhythm of the Caribbean in the last thirty years. The champeta comes from the neighborhoods, from the atmosphere of the popular verbena and is not new. Nor is it homogeneous sound; In fact, Sunday’s concert was not strictly champeta but soukous. In any case, and under whatever name, it reflects the African history and the paths it took to reach the Colombian Caribbean. “The sound of the champeta is directly related to that of the Congolese rumba and Zaire, to the soukous of central Africa. It is the same measure. In its sound, the great prominence is of the guitar and of a certain Cassio organeta that makes sound effects ”, explains the musical journalist Jaime Monsalve, of the National Radio of Colombia.

In neighborhoods of Cartagena and Barranquilla there is no weekend that does not sound; There are no Caribbean girls or boys who do not have the rhythm incorporated in the body. Shakira’s teacher is the perfect sample. He is barely 18 years old, he dances since he remembers and works to help his family. “I introduce you to Liz, she is a spectacular dancer from Barranquilla. I discovered her dancing champeta – one of the favorite Colombian rhythms – on Instagram and decided to invite her to be part of the Super Bowl’s half-time choreography, ” Shakira introduced her. She still doesn’t believe it. “Be a teacher of Shakira! I am a super humble girl. Everything comes in due course. God has blessed me with this wonderful opportunity, ”said Liz Dany Campo on the radio.

The champeta is danced with the whole body, but two steps are key: the horse, which is the jump that is seen in the Super Bowl, and the bed, which is danced in pairs, when the man takes the woman by the waist and go down to the beat of the music.

The song that Shakira danced

“The African theme that Shakira danced in the 2020 Super Bowl is Icha from Syran Mbenza with Diblo and Lokassa Ya Mbongo. They call him El Sebastián and it was a theme promoted by El Gran Freddy in Barranquilla at the end of the eighties, ”explains Don Alirio, a picotero expert (as DJs are known), another key concept for the dissemination of the champeta .

The picos are huge and colorful speakers that are used in the popular neighborhoods of the Caribbean and that served to democratize entertainment among the popular classes. “They promoted and developed many world music since the 50s although there are historical data that confirm its appearance since the late 30s,” he spread through networks. That is why, so that the subject that Shakira danced was known, The Great Freddy was important. “The first time they rang it was at a festival in the Barrio La Paz,” he said on Twitter.

Monsalve also remembers that the origin of the word champeta is related to a machete that bore that name. “Those who carried those machetes either as a work tool or as a weapon and who were the first to know the songs, they were called champetúos.” “You can track from the early 80’s the Son Palenque group appears, under the command of Justo Valdés and a year later Abelardo Carbonó with Abharca. While in Cartagena is Viviano Torres ‘Anne Swing’, “he adds.

Ariadna Padrón, Cartagena’s cultural manager, says there are pioneers like Mr. Black, Charles King and new ones like Kevin Flórez, or Gran Benko. “The Super Bowl thing was a call to pride in the inclusion and recognition of a genre that has been excluded. Shakira put the whole world in his ear, ”he says.

Champeta is also the chronicle of the Caribbean neighborhood par excellence. “They talk about love, but also what happens in the neighborhood and have a great sense of humor,” says Monsalve. In fact, there are champetas for the soap operas of different eras, the corruption scandals of the country as the 8,000 process and even for the Knights of the Zodiac.

The II Odeon Awards give Raphael its honorary award