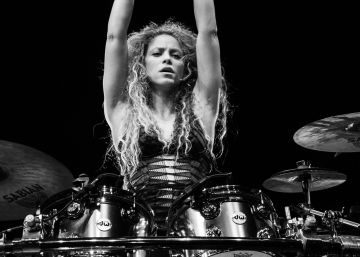 After attending the screening of the documentary on his last tour, it is rare to see Shakira still The 42-year-old singer receives a very different aspect from the exuberant one of when she goes on stage and, of course, without dancing.

One escapes from the entrance the look towards his hips, which fill the screen – and how – in the film and that are now fixed in the chair in jeans with a very high waist, to end up going up to his face in which a mischievous smile is drawn under almond-shaped eyes that glow with sympathy. Shakira in concert: ‘El Dorado World Tour’, It shows the right and the reverse of the tour (22 countries, almost one million spectators), including scenes behind the scenes and rehearsals (where it demonstrates the meticulous control that the artist has of her Show) and some intimate moment, in which they appear Gerard Piqué and his sons. The film, co-directed by herself, lasts more than two hours and is a true Shakira apotheosis,with the camera gloating in every inch of the singer and in the response of her most dedicated public. "The public is pure adrenaline," says the dervish of Barranquilla. The film will premiere on November 13 in Spanish cinemas and will be shown only for one night.

What does it feel up there on that altar on stage? “This tour has undoubtedly been the most special of my career, for all the challenges that arose, including accidents such as a bicycle crash (we renamed the El tour Purple Tour), and for everything that was supposed to be back. She was the first as a mother and after the fright of having been about to lose her voice. Being able to go out there was a gift and a miracle. And sing a relief and a renewed pleasure. ” The documentary underlines the incredible energy and vitality of Shakira that turns the expression "give it all" into a tautology of his stage attitude. Where does the secret lie: in the mane, on the hips, or in the middle, in the heart? “In the combination of everything,” laughs Shakira, “and also in not believing it, in understanding that we must continue working, studying, discovering, evolving. When the artist believes it he begins his decllve. ” And Shakira doesn't believe it? Go now! The singer takes the sincere exclamation well. “Something must be felt special,” he acknowledges.

The documentary, recreating in close-ups of his body and his gestures, such as the resounding hip movements – scientific demonstration that evolution did not create the human butt just to sit – or the self-massage of the breasts, erotizes the image of Shakira. "You think?". AHA. “I don't see it that way. There is a lot of sensuality, which is inherent in my artistic production. It is part of my sensitivity, but it is not the only one. I think there is a lace, a sensual edge in my work, although it is not the essence. I don't think my music is sexualized, there is that sensuality present that covers what I do. ” And with a mischievous pout he concludes: "I can't help it."

Poetry and feeling are also consubstantial to Shakira. In the documentary he talks about Ithaca and that the important thing is not to reach the island but the trip. Cavafis! "Yes, I love it and I have that poem printed and hung in the living room at home in Miami." Returning to the mundane, what do you think of reggaeton? “It has a very universal pattern, which everyone recognizes. It has diversified and evolved in thousands of derivations and styles. ”

Over time, the Colombia from which Shakira came out has become a great tourist destination while Barcelona is on fire, and worth the phrase. "In a family where there are members with disagreements, as is the case today in this country, you have to sit down and talk," the artist reflects. "Listen and dialogue to close the conflict."

On the vitality that he shows in the documentary, Shakira points out that they did not give him “the middle point button” and hence his ability to be passionate and not stop. “Gerard always tells me. Well, look at him! ”

Juan Ortega and De Miranda, news of a reduced fair in Valdemorillo | Culture