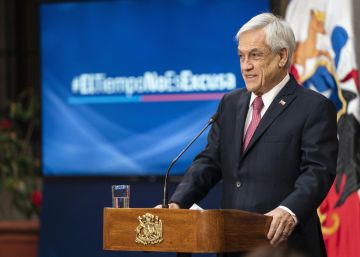 The sexual crimes against children and adolescents in Chile will not prescribe, once the law promulgated this Thursday, which is approved after several scandals of abuse against minors that have shaken the country, especially by members of the Catholic Church. The new text is not retroactive, something that generated an arduous debate during the processing of the project in Congress.

"As of today, the passage of time will no longer be an accomplice of the abusers of our children, nor an ally of impunity (…) The responsibility of those who abuse our children will be indelible, just as it is The pain they caused was unforgettable, "said Chilean President Sebastián Piñera, who signed the law in an act at the Executive's headquarters.

Until the law comes into force, in the coming months, sexual crimes against minors have a statute of limitations of between 5 and 10 years after the victim reaches the age of majority if the victim does not file a complaint, something that happens very often. In Spain, the law establishes the prescription in five years for abuse and 15 for sexual assault since the victim turns 18. The Government of Pedro Sánchez approved last December a draft law that It foresees that the term begins to count at 30 years of age.

"We all know that reporting sexual abuse is very difficult, especially for those who suffered sexual abuse during their childhood or adolescence," said Piñera, adding that many victims get the courage and strength to denounce many years after having suffered the abuses and with the help of professionals.

The president said that between 2015 and 2018 the reports of sexual abuse increased by 33% and last year exceeded 10,000, although those figures are far from showing the real magnitude of the problem. According to an estimate by the Chilean prosecutor's office cited by Piñera, for each victim of sexual abuse who files a complaint, there are seven other minors who were also abused and did not report it.

"Silence is due to fear, guilt, shame, traumas, suffering and abuse of power, because behind sexual abuse there are often abuses of power, manipulation, and networks of cover-up," he said. the mandatary. Piñera regretted that victims who decide to take the step of reporting abuses, the subsequent criminal process leads to "revictimizar", a factor that affects that often prefer not to go to court.

The president thanked Congress for the rapid approval of the project and made a special gesture with James Hamilton and Vinka Jackson, two representatives of civil society who actively collaborated in drafting the law. Hamilton is one of the complainants of the priest Fernando Karadima, protagonist of one of the cases of sexual abuse committed by members of the clergy more media and prominent. Jackson, meanwhile, is a psychologist, writer and child rights activist who was also a victim of abuse when she was a child.

The new legislation also prevents them from prescribing civil legal actions to pursue the responsibility of the accomplices and the abettors of the abuses, not only those directly responsible for the crimes.

Only in known cases within the Chilean Catholic Church, 166 cases are currently open, against 221 people investigated and involving 248 victims, of whom 131 were minors when they suffered the crimes, according to data from the beginning of May. offered by the National Prosecutor's Office.