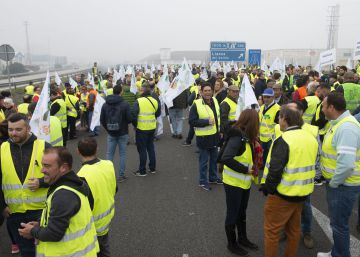 The field protests They arrive today in the province of Seville, which is preparing for a historical tractor. Under the motto Farmers to the limit, about 30,000 professionals in the sector are called to secondary stoppages and cuts in the main access roads to the territory. Sevillian agriculture is, after Almeria, the one that creates the most wealth, some 2,500 million euros that generate 100,000 jobs.

From eleven o’clock in the morning until two o’clock in the afternoon, the convening organizations plan to close the A-92, which connects Seville with Malaga, Granada and Almeria, in the direction of Madrid at the height of Aguadulce; the A-4, which joins Córdoba and Jaén, in the municipality of Carmona, in the direction of Madrid; the A-49, which leads to Huelva, in Benacazón and the AP-4, which leads to Cádiz, between kilometers 53 and 54 of the old toll road in the direction of the Cadiz capital. The only way of communication that will be expedited is the A-66, known as the Ruta de la Plata, which goes to Extremadura.

As in the previous protests, the last one on Monday in the 97 towns of the province of JaénThe protesters cry out for fair prices at source, a greater balance in the food chain, which puts an end to unfair competition by third countries and the implementation of double labeling and a strategy against tariff rearmament. Asaja, one of the organizations calling the courts, complains that the central government does not resolve the crisis in the sector in a decisive manner and demands the involvement of more ministries to offer solutions to the problems facing the countryside.

These claims coincide with the Council of Ministers, which plans to approve a package of aid measures to the field on Tuesday, and one day after President Pedro Sánchez led an interministerial meeting with all affected departments to seek solutions to this crisis that he has filled. of protests throughout Spain in recent weeks.

Farmers have taken to the road ahead of schedule and at unauthorized points. Shortly before eight in the morning, about three hundred olive growers from different parts of the province of Jaén have cut the A-4 at the height of the town of Santa Elena, reports Efe. The obstruction is in both directions, both in the Madrid and Seville direction and is causing retentions. The organizing associations of the courts planned for today starting at eleven in the morning have been unmarked from the action.

The new government delegate in Andalusia, Sandra García, has supported farmers on Monday. “Their claims are of justice and have the commitment of the Government of Spain,” he said during his inauguration. “It is being used thoroughly in Brussels to avoid cuts in the CAP and at the same time it will take to the Council of Ministers the reform of the law of the food chain and other fiscal reforms ”, has abounded.

In the province of Seville, one in six employees is linked to agriculture. The territory is also the world’s leading producer of table olives – a product mortally wounded by U.S. tariffs– and the first in Spain of rice, cotton or sunflower.

The expectations before the demonstration on Tuesday are such that the educational centers have already informed parents that, given the possibility that school routes cannot make their way, students’ class absences will be justified. Many municipalities have shown their solidarity with farmers’ protests by approving institutional declarations and motions and placing green ties in the town halls. Some mayors plan to accompany them on their tractors.

The concentrations of the countryside in the province of Seville culminate a calendar of protests in the community that since the end of January has already seen mobilizations in Almería, Córdoba, the Sierra de Cádiz, Granada and Jaén, where this Monday thousands of people defended olive oil in the 97 municipalities of the territory.