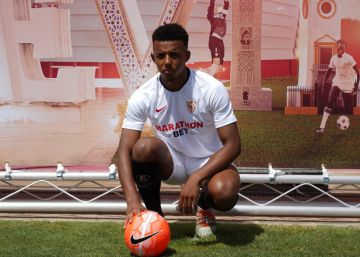 Jules Koundé (Paris; 1998) has had a season and a half in the Girondins de Bordeaux to become the most expensive signing in the history of the Seville. The Andalusian club will pay 20 million euros plus five in variables for a player who has played 70 professional games with only 20 years. Under 21 international with France, Koundé was presented as one of the most appreciated values ​​of Seville designed by Juñen Lopetegui. “He gives a damn that you tell him that it is the most expensive signing in our history. By the way, it still is not, although it will be if the variables are met, ”he clarified Monchi in the long putting of the defense. He thus indicated one of the basic qualities of Koundé so that his signing was expressed: personality. The general sports director of Seville explained the reasons for such a remarkable investment by a player who has barely played in the elite. “I trust him a lot. I have seen it many times and it is the ideal central defense to play with the advanced line as Lopetegui wishes. In addition, the market is like this and you have to pay these amounts, ”said Monchi, who has already made up to 10 signings in this new Seville.

The allusion of the sports director to the market underlines a trend in the European transfer market this summer. The clubs not only make large investments for strikers and midfielders. Now also the centrals quote high. You just have to check the numbers that appear on the specialized page Transfermarkt to verify, for example, that two centrals have sneaked into the 10 most expensive operations of continental football so far. They are the cases of De Ligt, transferred from Ajax to Juventus for 85.5 million euros, and Lucas Hernández, from Atlético to Bayern for 80. These signings are joined by those of Militao by Madrid (50 million), Manolas by Naples (36) or Diallo by PSG (32). In The league, Atlético has disbursed 25 million for Hermoso. In addition to the 20 plus five in variables by Koundé, Monchi has brought another plant, Diego Carlos, of Nantes, by 15. In the past year, the highest amount paid for a plant was made by the PSG. It was 37 million euros for Kehrer al Schalke. The second was the 35 that Barcelona paid to Sevilla for Lenglet. Two courses ago, however, the current trend began to glimpse with the cases of Van Dijk (85 million paid Liverpool) and Laporte (65 Manchester City to Athletic Club).

“The market is like that. You pay a lot for any demarcation. I only wish that Koundé can respond to this great investment we have made. I think it has less risk than it seems, ”continued Monchi, who had never made such an expense for a plant. The Argentine Correa, for 18 million, and his compatriot Franco Vázquez, for 17, were the highest investments made by the manager in Seville. In the Andalusian club, the 24.5 million paid to Sampdoria by Colombian striker Luis Muriel in 2017 had absolute registration until this operation with the Frenchman.

Koundé, who studied Castilian in France, was quite calm when he was exposed that he had become the most expensive signing in the history of the Andalusian team. “I have no pressure with that. It is something that does not depend on me. I know I have qualities to succeed here, ”he said. Koundé maintains the tendency of the sports director to bet on French defenses for Sevilla. So were the cases of Rami, Lenglet, Squillaci, Escudé or Kolo.