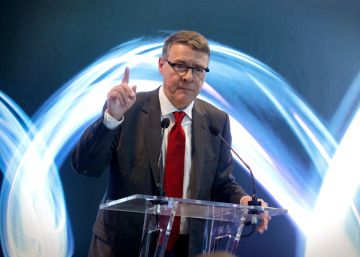 Jordi Sevilla has reiterated this Tuesday before the members of the Board of Directors of Red Eléctrica de España (REE) that his resignation as president of the group It is due to “external restrictions and discrepancies with the regulator”. “[Estas] they affect the good progress of the company, its future plans and my management as president, “he explains in a letter he has distributed among the directors. These external restrictions mentioned by Sevilla are attributed to the Vice President and Minister for the Ecological Transition, Teresa Ribera, with which he has had serious clashes during the year and a half that he has held the position.

“The corporate governance of this company is a pioneer and reference, and with my decision I want to strengthen it and contribute to maintaining it at the highest levels of demand,” adds Sevilla in the letter that has also been sent to the CNMV as a relevant fact.

The abandonment of Seville fell like a bomb in the environment of the Presidency of the Government, which did not expect a new fire to extinguish a few days after its formation. According to some sources, it is considered that the matter was poorly managed by the minister. Seville, on the other hand, considers that the moment chosen was appropriate because it has successfully completed a relevant stage.

“In the last year and a half we have decisively promoted the Energy Transition collaborating in the definition of the scenarios of the National Integrated Energy and Climate Plan and making a historical record of integration of renewable energy installations in the electrical system a reality, with the incorporation of more than 6,500 MW of photovoltaic and wind energy in 2019, “he said in the letter.

It also highlights that it has submitted to the Ministry for Ecological Transition a planning proposal in accordance with the criteria and principles defined by the regulator for the development of the necessary transport network in the period 2021-2026.

In the opinion of the former president of REE, the company has made significant progress in achieving the Strategic Plan, both in terms of diversification, especially after the purchase of Hispasat, and in the development of electricity transmission networks in Latin America.

Sevilla does not avoid talking about the debates held during some “intense months” with the National Commission of Markets and Competition (CNMC) about the new regulation that will affect the remuneration of the group’s activity as a carrier and operator of the national electricity system. In these debates, he showed strong discrepancies with the agency and did not have the understanding of the minister, whose husband, Mariano Bacigalupo, is a counselor.

“Given this journey and with this situation, and given the wear and tear that the defense of the interests of the company has represented for me in recent months, I consider that the time has come to take over a presidency that drives the new stage that opens for Red Eléctrica, “he explains.

Seville ends by thanking the directors for their understanding and collaboration. He asks them to understand and share “that the best thing for the company is to approach the next stage with a new presidency in front.”