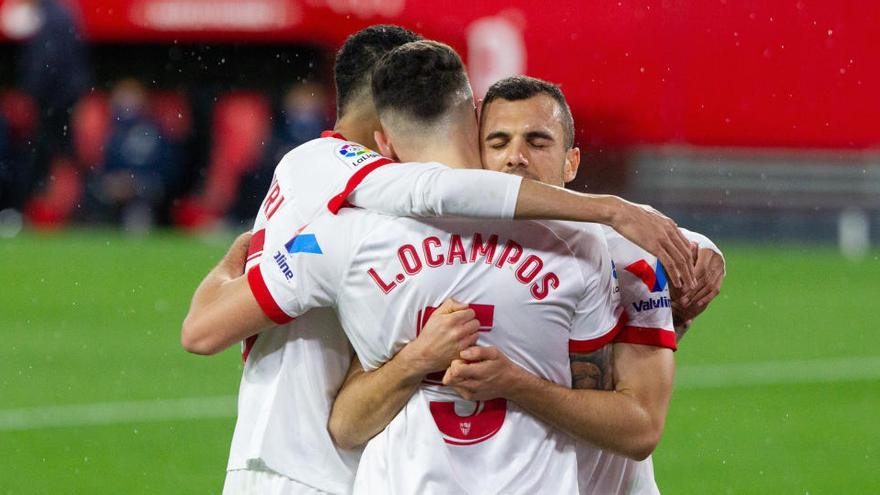 The Seville won 3-0 at Getafe with goals in the second half, in which the Madrid team was left with ten players due to the expulsion with a direct red in the 53rd minute of Togolese Djené Dakonam, who injured Lucas Ocampos with a strong tackle on an ankle for which the Argentine had to leave the field on a stretcher.

The team of Julen Lopetegui, who was also expelled, like José Bordalás, coach of the Madrid team, due to a confrontation between them after the expulsion of the Getafe player, is consolidated in the Champions League area while the azulón team adds a new day in a row without winning.

Sevilla were looking for their seventh consecutive victory, after adding three in the Copa del Rey and another three in The league, and follow your good running in the season, in which the round of 16 of the Champions League against Borussia Dortmund is also close.

The Basque coach, faced with this tight schedule, in which after Getafe’s visit next Wednesday the Sánchez Pizjuán arrives at the Barcelona in the first leg of the Cup semifinals, recovers footballers and for this match he called two who had been absent for a long time due to injury, Czech goalkeeper Tomas Vaclík and left-back Sergio Escudero, who even started.

The Madrid team arrived in the Andalusian capital after drawing last round against Alavés at the Coliseum (0-0) and being thrashed in the previous one with Athletic in San Mamés (5-1), results that halted an improvement that began to take place with the arrival of Japanese midfielder Take Kubo and the Catalan midfielder Carlos Aleñá in the winter market. The Alicante coach had the important loss due to suspension of the Uruguayan midfielder Mauro Arambarri and, for this reason, took the center midfielder David Timor, while the Togolese Djené Dakonam returned to the center of the defense after being sanctioned last day.

With that, Getafe wanted to discuss possession of the ball and pressed very high against Sevilla, although always well protected in defense when it was the rival who tried on both wings and also with circulations through the center. It was Serbian midfielder Nemanja Maksimovic who had the first clear chance of the match with a header in the twenty-fifth minute that ended the ball very close to the strain of a goal post from Sevilla player Yassine Bono, although the local response came soon with another head shot with intention, that of Ocampos.

The match passed moved, with approaches to the two areas, but it seemed that this dynamic favored the visiting team more by taking the leading role away from Lopetegui’s. Despite this, Sevilla was close to putting the 1-0 at 35 minutes with a shot from Ocampos that was consulted with the VAR and annulled the goal as the Argentine’s handA decision much protested by the Sevilla fans, who saw how before the break Maksimovic warned Bono again.

In the second half, Lopetegui gave entry to Brazilian midfielder Fernando Reges for the Serbian Nemanja Gudlj, who had seen a yellow, and Sevilla came out ready to be the dominator with a very active and always dangerous Ocampos against goalkeeper Rubén Yáñez. Precisely Ocampos had to leave the field on a stretcher due to a very hard tackle to an ankle of Togolese Djené Dakonam, an action that the referee Juan Martínez Munuera did not indicate as a fault but of which he was later notified by the VAR and sent off the Getafe footballer with a direct red.

The game was stopped for several minutes, got rare for that play to the point that the two coaches were sent off, but at the resumption, Munir El Haddadi, who had just joined the field, made it 1-0 after a good pass from Joan Jordán. The sevillista goal, with Getafe with ten players on the field, gave the initiative to the Seville formation, which was annulled a new goal, this one to the Moroccan Youssef En-Nesyri for offside of the Argentine Franco ‘Mudo’ Vázquez .

Shortly after, En-Nesyri himself was able to make the second for Sevilla but his shot was repelled by the crossbar, although he did arrive with a Zapatata from outside the area of ​​Argentine Alejandro ‘Papu’ Goméz, who had left minutes before to debut in LaLiga after he had already done so in the Cup. En-Nesyri rounded off Sevilla’s win with 3-0, the thirteenth in his personal account in this tournament against a Getafe already with his arms lowered .

Referee: Juan Martínez Munuera (Valencian Committee). He sent off Getafe player Djené Dakonam (m.53) with a direct red for a hard tackle to Ocampos and also the two coaches, Julen Lopetegui (m.58) and José Bordalás (m.58), for facing each other after the entry of I left Ocampos. In addition, he admonished the visitors Cucurella (m.09), Cabaco (m.70), Timor (m.73) and Damián (m.91), and the local Gudelj (m.38).

Incidents: Match of the twenty-second day of LaLiga Santander played at the Ramón Sánchez Pizjuán stadium without an audience. Moroccan striker Youssef En-Nesyri exhibited before the match the trophy that accredits him as the best in LaLiga last January.