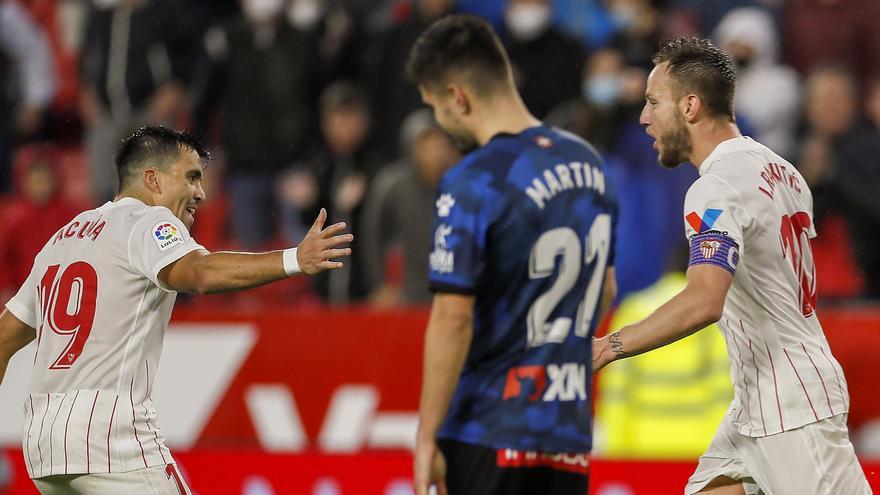 The Seville tied in the extension of the match he played against Alaves with a goal from the Croatian Ivan Rakitic who put the final 2-2, although the Andalusian team did not prevent the Basque from making the locals lost their first points at home so far this season after playing six games of The league at the Sánchez-Pizjuán.

A goal from Joselu Mato, from a penalty in the extension of the first half, put Alavés ahead (1-2) at half-time. The Argentinian Lucas Ocampos, shortly before, he had balanced for Sevilla the goal he scored for Alavés in the first minutes Victor Laguardia, but in the second, in the 92nd minute, Rakitic achieved the tie in a match marked by the heavyness of the pitch due to the rain.

The Andalusian team started the day with the possibility of climbing to the top of the ranking waiting for what the two teams that finished thirteenth ahead would do on Sunday, the Real Madrid, tied on points, and the leader, the Real society, with one more.

Those of Julen Lopetegui, in addition, attended the event with a full five victories in LaLiga in the Sánchez-Pizjuán and this time they found a rival in full swing with ten points added from the last twelve disputed.

The locals had the already known casualties due to injury in the last games of two fundamental players, the Moroccan striker Youssef En-Nesyri and the right-back Jesús Navas, and also other physically fit due to ailments such as the Danish midfielder Thomas Delaney, the Argentinian half points Erik Lamela and Alejandro ‘Papu’ Gómez or the extreme Suso Fernández.

With those circumstances the 0-1 arrived very soon, before the first five minutes were up, the work of central Víctor Laguardia, heading out of a corner that had been forced by forward Joselu Mato, wanted by Sevilla a few months ago.

Javi Calleja’s team He showed in those minutes that he did not want to lock himself up, but from then on he recoiled from the need of the rival to redouble his efforts to rebuild the situation, which Rafa Mir could do with a shot with his back to the frame that was very close to becoming a goal .

The game took place in this vein, which also gave the Basque team the opportunity to mount counterattacks that would hurt again, as in one by Luis Rioja in which the ball came out tight to the right of the Moroccan goal. Yassine Bono.

The intentions of Alavés were clearer, well sheltered in defense and against a somewhat hasty Sevilla, but before the break Ocampos tied after a play started by Óliver Torres and the Argentine Gonzalo Montiel.

Sevilla pressed for the comeback before the end of the first half, but it was Alavés who scored the second, Juanlu from penaltyi in the extension after the referee, after consulting with the VAR, signaled it by the hand of Ocampos when he jumped over the wall at the exit of a direct free kick.

The penalty was very close to being stopped by Bono, but the wetness of his gloves and the ball itself made it slip and that the party went to the second half with a 1-2.

In the resumption, with the field flooded by the abundant rainwater, it was very difficult to braid plays, but Sevilla left with desire and as best they could due to the state of the grass for the tie, although Alavés also tried to take advantage of the local desperation to put more land in between, how could he Edgar Mendez on a couple of occasions.

Lopetegui moved his bench and used up the five changes very soon, although in the case of Suso Fernandez, who had left at the beginning of the second half after a loss due to injury, had to leave his post at 68 minutes after suffering from the ailment.

The game entered its last quarter of an hour of regulation time with the local team focused on the draw, which was in the boots of Ocampos, Rafa mir or Rakitic, but it was the Croatian’s second chance that served for the 2-2, although even Sevilla had another clear before the end that goalkeeper Fernando Pacheco thwarted by stopping the ball over the goal line.

Incidents: Match of the fourteenth day of LaLiga Santander played at the Ramón Sánchez-Pizjuán stadium before some 25,000 spectators. Before the game, an act of recognition was held for two players, the French central Jules Koundé and the Brazilian midfielder Fernando Reges, for completing the hundred games with Sevilla. Heavy rain from the last minutes of the first part that left the field very flooded.