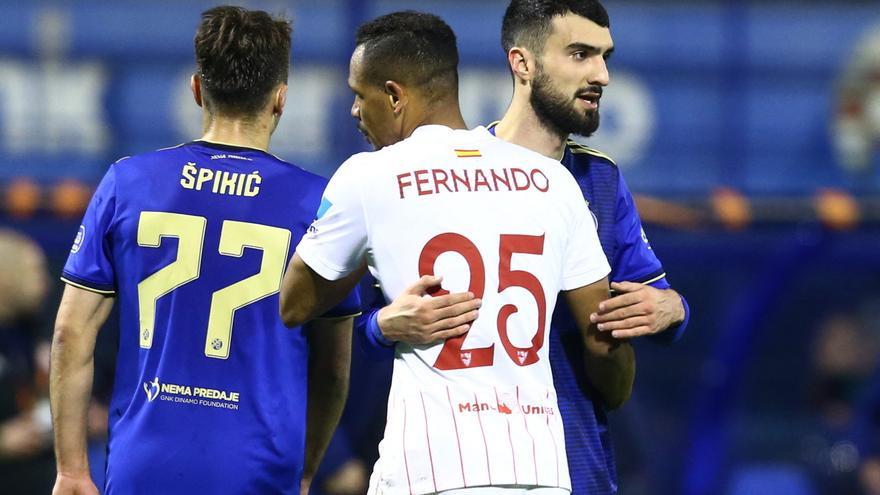 The Seville lost 1-0 at the field of Dynamo Zagreb and he suffered a lot to assert the 3-1 lead he achieved in the first leg, although the result is worth it to get into the round of 16 of the Europa League after a game that ended with ten players when seeing the Danish thomas delaney two yellow cards.

The Spanish team, despite not having a good game, had it under control, although a much-protested penalty in the 63rd minute by Argentinean Marcos Acuña, who converted Mislav Orsic and the expulsion of Delaney in the 91st minute and with four extensions put him in trouble.

The set of Julen Lopetegui faced the game with that advantage from the first leg a week ago at the Ramón Sánchez-Pizjuán stadium but with an offensive team that foreshadowed that they also wanted goals in the Croatian capital so that history would not repeat itself, since the locals eliminated in the eighths of the last edition to Tottenham José Mourinho after a 2-0 loss in the first game.

The Gallic winger was missing from the appointment Anthony Martial, one of the winter reinforcements, who was injured last Sunday in Barcelona against Espanyol (1-1) and who joined the loss of Dutch central defender Karim Rekik, who had to withdraw with discomfort in the first leg of this tie, although the Argentine returned to the right side Gonzalo Montiel after three games absent due to a muscular ailment.

Meanwhile, Dinamo Zagreb received Sevilla at the Maksimir stadium without two of their key players, the captain Adrijan Ademi and another midfielder, Luka Ivanusec, both due to injuries, but he brought back French defender Kévin Théophile-Catherine and attacker Komnen Andric, although he was initially a substitute.

As expected, the team coached by Zeljko Kopic came out intense, wanting to scare the rival with the support of their fans and they succeeded, because the ball didn't last long for Sevilla when they wanted to create and they worked much harder on defending.

As the minutes went by, the situation did not change, even more towards Dinamo, who saw an adversary withdrawn, without resources and with their top players practically unheard of, since neither the Argentines Papu Gomez and Lucas Ocampos, the Mexican Tecatito Corona or Rafa Mir they received balls with guarantees.

Despite this, the match reached half an hour without the Croats making the Moroccan goalkeeper work hard Yassine Bono and with a Sevilla that began to approach the goal defended by Dominik Livakovic, against whom Rafa Mir or Papu tried safely.

This balance did not give more than for the initial draw before the break, but with a very negative circumstance for the visitors, who lost Brazilian central defender Diego Carlos in the last minute of the first half due to a muscle injury.

This circumstance made Lopetegui restructure the defense in the second period, with the entry of Delaney delaying the Brazilian Ferdinand Reges to the central position and also with the presence on the right side of Jesús Navas for Montiel.

Sevilla came out like this with another face, the one with the most protagonist with the ball and much more involved in the opponent's field, with which two good ones came to score in a header from the French central defender Jules Koundé and another one that started a very active Tecatito and that could not finish Rafa Mira.

They were the best moments for Sevilla, although surprisingly it was 1-0 for Dinamo in a penalty which Orsic converted in the 64th minute due to a very protested hand by Acuña in an action with Marko Bulat, who had left minutes before.

The goal changed the game again, as the Balkan team was revitalized in search of a 2-0 that would tie the tie, while Sevilla, due to the actions of Ocampos and Rafa Mir, failed to beat Livakovic's goal, so the match went to its final stretch with an exciting result and even more so when Delaney saw the second yellow card and left his team with ten.

Referee: François Letexier (France). He expelled Sevilla player Delaney for two yellow cards, seeing them in the 66th and 91st minutes. He admonished the visitors Acuña (m.63) and Bono (m.87) and the local Tolic (m.93 on the bench).

Incidents: Second leg of the qualifying round prior to the round of 16 of the Europa League played at the Maksimir stadium before some 11,000 spectators, the maximum capacity for this match.