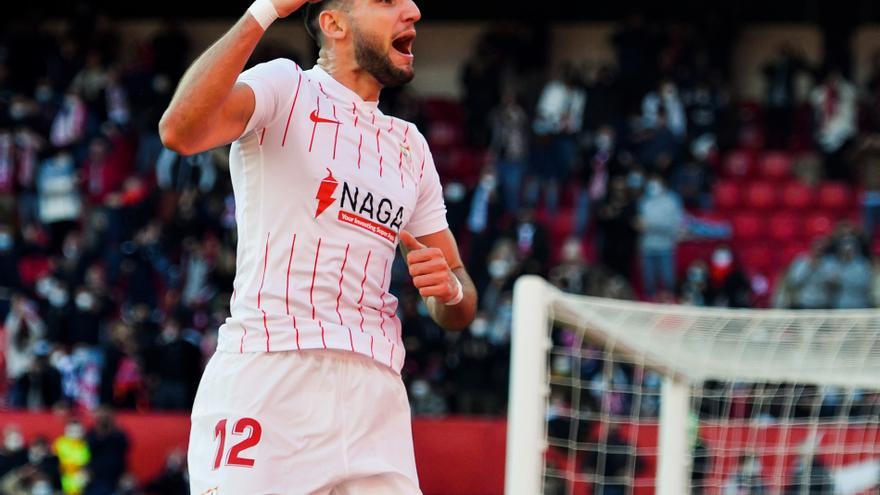 After a first half of clear dominance of the local team, very effective, and with few occasions, the 1-0 came in the 22nd minute after a cross from the right by Argentine Lucas Ocampos that Mir took advantage of to surprise David Soria with a heel shot with his right, who perhaps was overconfident. After the break, a very solid Sevilla did not have any trouble to maintain their income.

With notable casualties in both, eight in Sevilla and several in Getafe such as the Uruguayans Olivera and Arambarri due to suspension, replaced on the left and in the middle by the Argentine Jonathan Silva and the Portuguese Florentino Luís, the faces of two teams with the marked stamp of their technicians could be seen: Julen lopetegui and Quique Sánchez Flores.

With the sevillista challenge to follow in the wake of the leader and the azulones to continue advancing to quiet areasYes, the duel measured two teams on a roll, with 5 unbeaten matches for the Andalusian and 6 -only one goal conceded- the Madrid, and two centrals who returned in the league after suspension: the local Jules Koundé and the visitor Djené.

Those of Lopetegui, with five novelties in the eleven (the Argentine Acuña, Jordán, the Brazilian Fernando, Óliver Torres and Mir) with respect to the cupbearer's triumph in ZaragozaThey came out strong against Getafe who, with four changes in relation to the one that won 1-0 at Real Madrid (Djené, Silva, Florentino and Jaime Mata), had a hard time putting together their game.

The Seville, without a brilliant football far from it, took all the initiative and controlled the game well from the start, in which he was able to get ahead at 10 minutes with a header from a Rafa Mir more active than usual that ended in a goal, but was annulled by a clear offside.

After not taking advantage of a good ball in the area, the Serbian Maksimovic when crossing, providential, Fernando, Hispanics redoubled their dominance, but with hardly any occasions before a Getafe that, with the Turkish Enes Unal as his most dangerous man, he wanted to go out and put Serbian goalkeeper Marko Dmitrovic in trouble, starter after the departure of Moroccan Bono, along with En-Nesyri and Munir, to the Africa Cup.

Quique's lacked more clarity and depth to complicate the life of a very safe Sevilla in defense and that, without great ideas, he insisted like a hammer until he found his opportunity. This came midway through the first half with the 1-0 of the 'matador' Rafa Mir, his ninth goal of the course and his sixth in the league.

Mir got his character as a rogue in the area in 22, In a center from the right of the Argentine Lucas Ocampos, very incisive, to surprise ex-Sevilla player David Soria with a masterly heel shot with his right, who perhaps was overconfident.

This blow, which was followed by a distant shot from the Argentine Papu Gómez who left, woke up Getafe, who took a step forward, butor without any success before the solidity of Seville, and to whom a goal by Maksimovic was disallowed in the 42nd, due to a clear offside by Mata.

In the resumption, with the entry of the Serbian Gudelj in the axis of the rear by the injured Koundé, Quique's team came out briskly to look for a draw that Carles Aleñá had right away, but his shot with a lot of sense from afar was cleared well by Dmitrovic.

Those of Lopetegui, who increased their soccer control in this half by being in advantage on the scoreboard and practically not going through difficulties, he replied in 49 with a shot from Mir again, head-to-center by Argentine Montiel, who beat Soria, although it was his second goal disallowed for offside.

Lopetegui refreshed his team with the entry of Rakitic and then Óscar Rodríguez, this one almost at the end, and Quique, more demanded for being behind on the scoreboard, did the same with Darío Poveda, the Czech Jakub Jankto, the ex-Sevilla player Vitolo and the Uruguayan Cabaco, the latter because of Cuenca's physical problems, but Getafe never found the ways to create problems for a very serious Sevilla.

Furthermore, lThe clearest occasions fell on the local side, but neither Papu Gómez, andn a shot from the front that narrowly missed, not even Rakitic, with a closed center that Diego Carlos did not miraculously hit, got it right, although Sevilla certified a new victory at home to continue thriving in second place.

Incidents: Match of the twentieth day of LaLiga Santander played at the Ramón Sánchez-Pizjuán before about 31,000 spectators, with the capacity reduced to a maximum of 75% due to health regulations due to the pandemic.