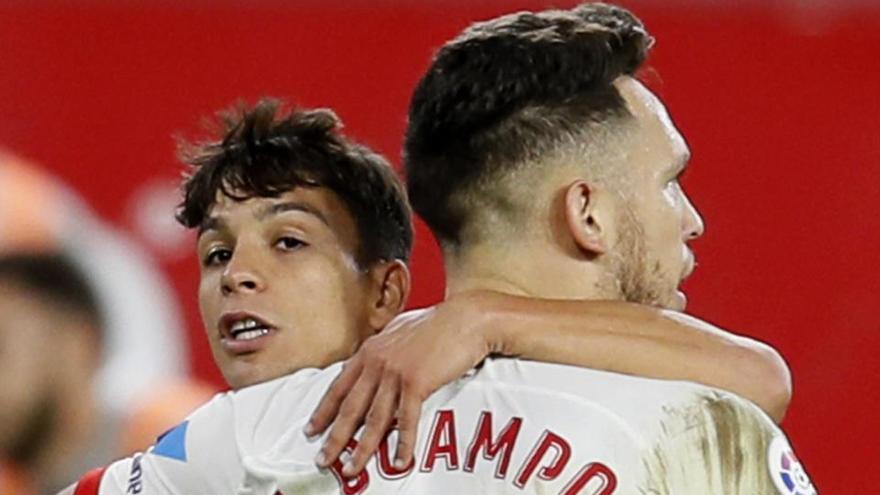 Sevilla beat Club Atlético Osasuna 1-0 in an ugly gray match thanks to a goal from the Argentine Lucas Ocampos from a penalty, at the beginning of the second half, which ruined the good work done by the Navarrese team throughout the match, although without success and with little arrival.

After a very competitive first half and with few clear occasions for both teams, the Sevilla players, whom Osasuna demanded a lot of them, They did not waste their option to tie the victory in that penalty, stopped in the first instance by Sergio Herrera, although it was repeated by having both feet off the goal line and could not avoid the 1-0, ultimately definitive, after a new launch from the Argentine.

Sevilla repeated at home, after the high of the victory with one less since the break against Krasnodar in the Champions (3-2), but with the need to stop his hemorrhage in the League due to his three defeats in a row and take flight against an Osasuna always complicated, very physical and orderly, and with the endorsement of his good image in the last days despite his defeat against Atlético (1-3).

The first half was very competitive and even, intense and with a lot of physical play, which meant that there were hardly any real scoring chances for both teams, more focused on winning balls, in the hand-to-hand fight for get the balls split, than in generating real football and clear offensive actions.

Sevilla dominated something more than Osasuna, although only in a territorial way, without depth, and they tried with long shots by Moroccan Youssef En-Nesyri and Óliver Torres, While the Navarrese, very solvent and who clouded the ideas of their rival, had their best options in a slightly deflected header from the Croatian Ante Budimir and a left-footed shot from Jony.

The sevillistas, quite lost, tried in a thousand ways, but with little clarity thanks to the great intensity and high pressure that Osasuna put into the match, especially in a first half in which each team had to vary their starting eleven due to injuries very soon.

Thus, the red midfielder Lucas Torró had to leave his place to Oier Sanjurjo at 16 minutes, And he was followed in the Nervionense side by the Argentine side Marcos Acuña, relieved by Sergio Escudero at the end of this period, a setback that worsened for Sevilla when international Jesús Navas noticed discomfort and the Croatian half Ivan Rakitic replaced him at halftime.

This caused the local coach, Julen Lopetegi, to put a three behind from the restart, with Ocampos in the right lane and Rakitic in the midfield as the Brazilian delayed his position, which gave stability to a Sevilla that in his first arrival with danger he found himself with a penalty in favor of a Jon Moncayola kick on the Argentine.

Ocampos himself assumed the responsibility of launching it and, although In the first instance, Sergio Herrera stopped him, the referee ordered a repeat of it for having moved and having both feet outside the goal line, and already in the second attempt the Argentine did not forgive and beat it with a powerful shot through the center in the 57th minute.

The 1-0 was like taking gold out of the mine for a little brilliant Seville, sometimes overcome by the pressure of the attacking Osasuna, and a real blow for the rojillos, who, from there and after Arrasate moved the bench looking for more verticality, He searched in vain for a tie even though he never gave up.

Sevilla, in which Lopetegui also made changes to control with the entry of Serbian Gudelj, of the Argentine Mudo Vázquez and the Dutch De Jong for Jordán, Carlos Fernández and En-Nesyri, controlled well until the end of the match, managed his advantage well and, except for two attempts by Budimir, the most incisive of the red box, he did not suffer in excess to tie the triumph.

Incidents: Match of the ninth day of The league Santander, played behind closed doors at the Ramón Sánchez-Pizjuán stadium. Lawn in good condition.

Barcelona, ​​without Messi for the procedure against Ferencvaros

Dapena: “For Maradona there is silence but not for the victims of violence”

All the goals of matchday 16 of Segunda