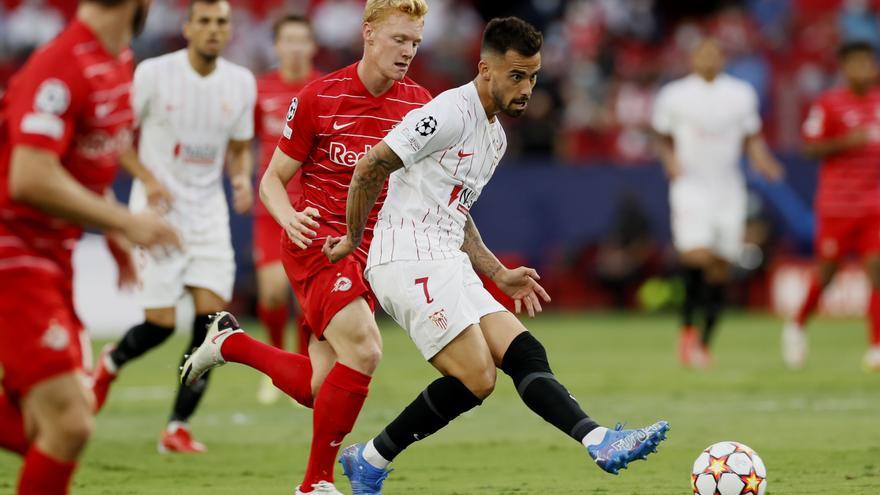 The Seville, with goals from Moroccan striker Youssef En-Nesyri in the first half and Rafa Mir in the second, when he was already playing with ten players due to the expulsion in the 65th minute of Danish Thomas Delaney, won 2-0 to Spanish in Sánchez-Pizjuán, where the visiting team squeezed in the second half but without clarity or effectiveness, quite the opposite of the local formation.

En-Nesyri, in the thirteenth minute, he made it 1-0 after a serve by Jesús Navas from the right, but then in the second the Andalusians had to fight to keep the score at an inferiority, although they even increased it with both Rafa Mir, his second as a Sevilla player, which makes two wins in a row accumulate and the team is placed in the Can area of ​​the table and with the game pending against Barcelona.

Espanyol returned to Seville six days after a draw (2-2) started in the Betis field in the extension of the match and that he achieved last Wednesday at home against Alavés (1-0), the first victory of the cuso on the sixth day of the tournament.

With that good inertia, the team that coaches the Valencian Vicente Moreno was planted in the Sánchez-Pizjuánm, in which, due to the continuation of the games, he made some changes and it had from the beginning with the Chinese striker Wu Lei and three former Sevilla players, the goalkeeper Diego López, the central Sergi Gómez and the right-back Aleix Vidal, this one after overcoming a strong blow that he suffered in a tibia against Betis and for which it took fifteen stitches.

They were received by the team that trains Julen lopetegui, who had beaten Valencia (3-1) on Wednesday in this same scenario and who was looking to repeat the triumph before the game that will be played next Wednesday in Germany against Wolfsburg on the second day of the Champions League.

Also the Gipuzkoan coach made changes in his eleven to distribute minutes and giving rest to players and, among the novelties, he started with the right winger Suso Fernández, who was not called up last day due to physical problems.

The Barcelona team did not shrink against the Spaniard, who, under the pressure of the rival, tried with direct play between the lines when he could not do it in combinations of the ball, with which the proposals of both had high first shots from Raúl de Tomás and then from Argentine Lucas Ocampos.

It was a play because Joan Jordán started, Suso continued with assignment to the right to Jesús Navas and center of this to the area so that En-Nesyri, who will not be able to play the next ‘Champions’ game due to suspension, will not forgive in the mouth of the goal and will score his third goal of the season.

It did not take long for the visiting team to show that they were not giving up and Sergi Darder, a few minutes later, shot from afar hard for the Moroccan goalkeeper Yassine Bono to put in a good hand and deflect for a corner.

More dangerous was the action of Raúl de Tomás after twenty-five minutes, who beat Bono bypass after a fast and very long service from his goal by Diego López, although the play was canceled for offside after consultation with the VAR.

Before the break, Ocampos, who responded well, stopped Diego López, and Suso had good options to put the second for Sevilla, but he went to the second half with En-Nesyri’s goal that left him open.

At the restart, Belgian forward Landry Dimata came in for Fran Mérida, a purely offensive change in search of that goal to balance the score, and in the 51st minute, Uruguayan center-back Leandro Cabrera had a chance at the exit from a corner.

The visitors began this period with a better tone than the opponent, with more control of the ball, so Lopetegui soon brought in the Argentine Erik Lamela and the Brazilian Fernando Reges to look for that midfield that had been lost.

But Sevilla suffered an unexpected setback in the 65th minute, when Delaney was sent off by two yellow cards followed by repeated protests, which left his team at a disadvantage with many minutes of play ahead.

This circumstance forced the locals to retreat in front of a visitor formation that accumulated many footballers in the attack, among them Loren Morón, a striker on loan from Betis to the Perico team this season.

Espanyol’s attempts, however, were frozen when Sevilla did take advantage of one of their attacks so that two of those who came out in the second half, the Dutch Karim Rekik and Rafa Mir, made the move that definitively closed the game in the 87th minute.

Incidents: Match of the seventh day of LaLiga Santander played at the Ramón Sánchez-Pizjuán stadium before some 24,000 spectators, close to sixty percent of the capacity, which is what is allowed by the health authorities due to the restrictions due to the pandemic.