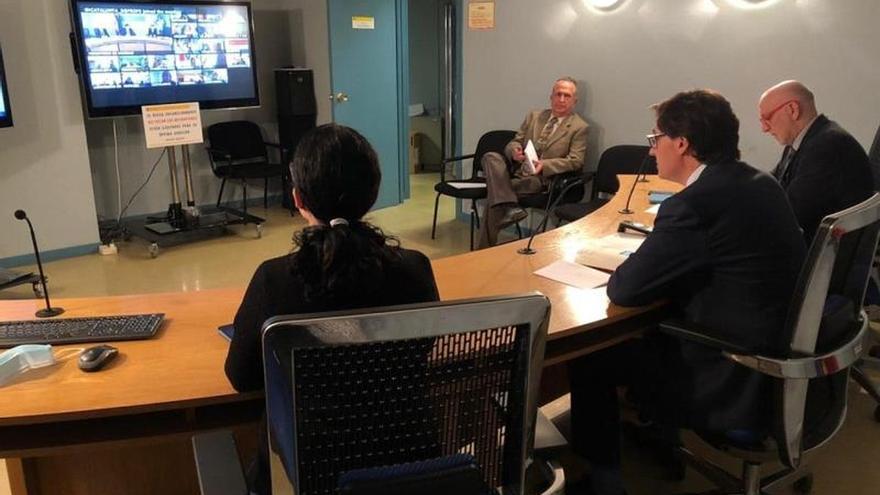 The pre-agreement reached this Tuesday between the Ministry of Health and the Community of Madrid, by which homogeneous criteria are established to apply restrictions in all municipalities with more than 100,000 inhabitants throughout Spain, must be endorsed tomorrow at the Inter-territorial Health Council, with the approval of the rest of the autonomous communities.

Minister Salvador Illa explained at a press conference that he has spoken throughout the day with all the health advisers and that he has found a “favorable environment” for the implementation of a “coordinated action in Public Health.” Namely: that the municipality has a cumulative incidence of more than 500 cases per 100,000 inhabitants in the last 14 days; a PCR positivity of more than 10%; and an ICU occupancy above 35%.

The Government of Navarra, the community with the highest cumulative incidence after Madrid, value positively the agreement. According to sources from the Executive of María Chivite to elDiario.es, it is considered positive to apply homogeneous criteria throughout the country, although they add that the Ministry has not yet communicated what those criteria will be. They also point out that it would not be understood, for example, that the only criterion to take into account was the incidence accumulated in the last seven days, where Navarra surpasses Madrid.

“We have acted long before”

The Catalan Minister of Health, Alba Vergés, has regretted that the agreement between the Government and Madrid to establish homogeneous criteria for restrictions in cities with more than 100,000 inhabitants is a way of “disguising” that does not only point to the community chaired by Isabel Diaz Ayuso. “They make a coffee for everyone, they try to hide their impotence. They haven’t done their homework,” she said.

Even so, Vergés has not rejected the conditions of the agreement, since he has defended that the Generalitat applies measures to restrict mobility and capacity long before reaching the threshold set by the Government and Madrid, the cumulative incidence of 500 infections per 100,000 inhabitants in the previous two weeks. “We have acted long before having figures of this style. And we will not stop doing so. We do not disagree, but we will act much earlier, always,” the Minister of Health has influenced.

Vergés has insisted, as his team has been denouncing for days, that Madrid should have adopted more forceful measures much earlier. “They have been pursuing each other for 15 days to take action. These 15 days should not have passed,” he said.

In the same vein, the president of Asturias, Adrián Barbón, has expressed himself through a thread on Twitter in which he stressed that “agreements in a composite state have to be agreed upon in the autonomous representation bodies.” “Some (Autonomous Community) have not stopped looking for excuses to make decisions, endangering the health of their citizens and that of the other Communities,” he wrote, before adding that “if any Autonomous Community continues to demonstrate its inaction to control the expansion of the virus the Government of Spain will have to take the opportune measures “.

“In line with what we stand for”

Sources of the Castilian-Manchego Executive have assured that “it is very much in line with what we defend” since, “more severe measures are taken in Madrid, but the criteria are applied sensibly” because, add sources of the Castilian-Manchego Executive, “no a city of 80,000 inhabitants with little mobility is the same with the rest such as Talavera, Parla, Getafe or Fuenlabrada “.

In the Canary Islands, where the four big cities they escape the new criteria state of restrictions against COVID-19, the Ministry of Health has preferred not to assess the agreement because it still does not know what the restrictions are. “Until tomorrow, that there is an Interterritorial Council, it will not be known,” they point out from the area directed by Blas Trujillo.

The Andalusian Executive has not made evaluations of the preliminary agreement reached between Madrid and the central government, but the Board was one of the first to join the strategy of Isabel Díaz Ayuso, demanding that Pedro Sánchez “coordinate a homogeneous response” in all communities to cope with the pandemic. The Board has also requested “common criteria” from the Ministry of Health, while warning that the same number of contagion in one community and in another “does not necessarily require the same response from the health authorities.”

After the meeting of the Governing Council on Tuesday, and asked about the request for “common criteria” to Health, the Andalusian Minister of Health, Jesús Aguirre, warned that “a figure is not enough to create a criterion. There are many other variables that disguise this figure, such as the accumulated incidence, the positivity of the tests carried out, the healthcare burden of the hospitals, the number of CRPs, the lethality of the virus, the traceability, the target population, if there is or there are no nursing homes … “. “The variables are given by epidemiologists and they are not a figure. The figure must be measured within a context. We must know the traceability of the contagion and study the parameters,” insisted the counselor.