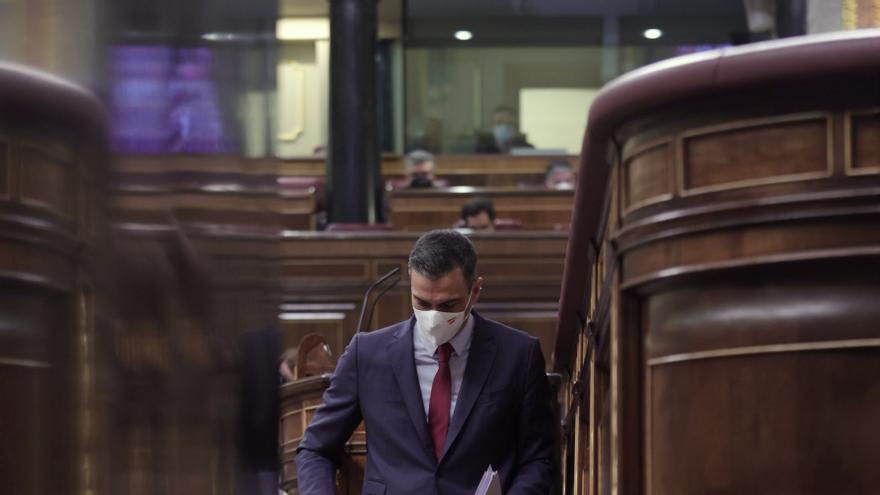 The president of the Government, Pedro Sánchez, resists the call for the debate on the state of the nation, as the opposition demands. That Plenary of general policy, considered the most important of the year after the General State Budget, and in which the leader of the Executive on duty takes stock of the management of that year and advances the general lines of what he intends to carry out in the next, it has not been convened for seven consecutive years. The reasons for that bolt to that important parliamentary appointment have been diverse: either because of the successive electoral repetitions that have occurred – four in these years – or because of the outbreak of the pandemic. Despite the fact that there is nothing to prevent it, Sánchez continues to delay it while waiting for the most propitious moment. The regulations of the Chamber do not oblige to convene it, nor is it regulated in the Constitution, although it is a tradition established by Felipe González in 1983. Since then the Congress has held 25 debates of this nature.

The last state of the nation debate took place in February 2015, being president of the Executive the leader of the PP, Mariano Rajoy, who fought a duel with the then head of the opposition, Pedro Sánchez, in a pre-electoral environment and before the cascade of elections that were coming: the Andalusians; the autonomic and municipal ones in May, the Catalan ones celebrated that fall; and the generals at the end of that year. They still did not have representation in the lower house or Unidos Podemos or Ciudadanos, whose respective leaders, Pablo Iglesias and Albert Rivera, made the leap to national politics months later, in the elections held on December 20, achieving the first 42 deputy (69 if those obtained by the so-called ‘confluences’ are added), and 40, the second. The two have now left their positions and are no longer deputies. Neither one nor the other have participated throughout their entire parliamentary career in any debate on the State of the Nation.

That Plenary of 2015 was moderated by the former president of the Congress Jesús Posada, of the PP, and it was very eventful. One of the anecdotes of the day starred her Celia Villalobos, first vice president of the Chamber, who was caught red-handed playing candy crush. Both Posada and Villalobos are now retired from political life, as is Mariano Rajoy himself. The former president of the Government was defeated in the motion of censure presented in 2018 by Pedro Sánchez, after which he also departed from the leadership of the PP, giving way to the stage of Pablo Casado.

Some of the spokespersons who took part in that debate have also retired or have been displaced from their positions by other leaders of their respective formations. This is the case of the PSOE and PP spokesmen, Antonio Hernando and Rafael Hernando, who despite their clashes in the hemicycle, maintained a cordial relationship on a personal level. The Catalan nationalists were led by Josep Antoni Duran i Lleida, also currently retired; ERC was captained by Alfred Boch; Amaiur – today EH-Bildu – by Sabino Cuadra, two other politicians who are no longer national deputies. On the left, the now minister Alberto Garzón, had his own role as IU representative, as did Joan Baldoví, from Compromís. The two remain deputies in Congress. Not so Joan Coscubiela, from the Plural Left, or Uxue Barkos, then spokesperson for Geroa Bai, and neither did Olaia Fernandez Dávila, from the BNG; Carlos Salvador, from UPN, and Enrique Álvarez Sostres, from Foro Asturias. The only groups that have not changed in all these years of spokesperson are the PNV, which maintains Aitor Esteban, and the Canary Coalition, which continues with Ana Oramas, now in the Mixed Group.

The one who still survived was Rosa Díez as the leader of UPyD. However, it was his last State of the Nation debate because months later, after the poor results in the regional and municipal elections in May, announced that he was not going to re-headline the magenta line-up. In the December generals, the lawyer Andrés Herzog replaced her as a candidate, but her training did not achieve representation in either of the two Chambers and ended up disappearing.

ERC’s claim for an independent Catalonia and the antiterrorist policy were two of the issues that stressed that debate on the state of the nation. Rajoy confronted Sabino Cuadra for telling him that in the PP they were “very comfortable when ETA killed.” “This statement is disgusting,” the Prime Minister reproached the Amaiur spokesman. Aitor Esteban joined the nationals’ request to demand changes in prison policy. “Our priority is to heal the wounds in Basque society after 30 years of terrorism,” he said, calling for prisoners to be brought closer to the Basque Country.

For his part, Alfred Bosch, “said goodbye to Spain” and Mariano Rajoy, anticipating that Catalonia was going to be an independent republic in a short time. “Goodbye with my heart that I cannot with my soul. I say goodbye in what will be the last general policy debate for me, and I hope it will be for all Catalans as well,” the Republican spokesman began by saying. Rajoy replied that it was “deeply undemocratic” and “contrary to our Constitution” the approach to the independence of Catalonia.

Another of the shocks experienced during those two days was the fainting that Baldoví suffered in the middle of the intervention. The medical services of Congress treated him in the same chamber and after a brief interruption of the session, everything was in a fright.

After that debate, not one more has been convened. The impossibility of investing a Prime Minister after the general elections of December 2015 led to new elections that were held in June 2016. Mariano Rajoy then managed to close an agreement with Ciudadanos to be proclaimed Prime Minister. But the leader of the PP did not call the debate, neither in 2017 -year in which it was the motion of censure of Podemos- nor in 2018 since in June, as a result of the sentence of the Gürtel case, he suffered the second motion of censorship, this time presented by Pedro Sánchez, who won it. In 2019 there were two new electoral appointments: one, on April 28 -without agreement between the PSOE and United We Can-, and another on November 10, that consolidated Sánchez in the presidency of the Government by finally managing to close a coalition government with Pablo Iglesias. But then the pandemic broke out and everything came to a standstill.

The worst of the health crisis has passed and now the opposition demands that Sánchez hold that general policy debate to account for his management of these two years. Especially the PP, who believes that “all their shame would be exposed”, from the pardons to their intention to reform the crime of sedition. The secretary general of the parliamentary group, Cuca Gamarra, accused Sánchez the other day of “resorting to the bulge” and “hide a debate”, “in light of its irreversible political decomposition”.

Pablo Casado’s interest in having it convened is twofold since he wants to take advantage, on the one hand, of the cracks he sees in the coalition government, which has just been remodeled; and on the other, the data pointing some polls, which begin to give a comeback to his party after the triumph of Isabel Díaz Ayuso in Madrid.

Given that he knows that there will be no electoral advance and that Sánchez will hold the legislature, especially if he manages to approve new PGEs again, The leader of the PP has not wanted to pick up the glove that Santiago Abascal and Inés Arrimada have thrown at him to present a motion of censure to Sánchez. He prefers not to get burned in a debate doomed to failure and to keep pushing the president to convene that important debate as soon as possible.

Vox, however, has not shown as much interest in that call as the PP because it believes to demand a debate on the state of the Nation would be a “fraud” since the head of the Executive “does not deserve” a debate of this type but “a motion of censure in all rule” to “dismount” him from La Moncloa, according to Deputy Macarena Olona. But for Abascal it would also be one more opportunity to attack the government for all francs. The leader of the far-right formation is grown after having achieved that the Supreme Court overturns the confinement decreed by the state of alarm.

For the leader of Ciudadanos, Inés Arrimadas, it would also be a good opportunity to reappear as an opposition party. Despite the fact that its formation now has only nine deputies, Arrimadas is determined to assert its small parliamentary weight after having celebrated the convention of Citizens in which they have proclaimed “the only liberal party” in Spain and he has warned both the PP and the PSOE that “they will not surrender”, because their project “is more necessary than ever” and even “essential” to end “bipartisanship” and its dependence on the “nationalists.”

But the Prime Minister prefers to wait for the most propitious moment. Moncloa sources have dropped that the convening of this debate is not “among their immediate priorities.” For now, he has announced an appearance in Moncloa before the media on Thursday, July 29, in which he will take stock of the political course.

Sánchez will therefore wait for the autumn to begin, the noise caused by the granting of pardons to the leaders of the you process and the opening of the dialogue table in Catalonia to consider the date of the great debate. In his favor, he plays that the vaccination process is being completed and that the signs of economic recovery are beginning to show, especially now the European funds are arriving.

On the other hand, the negotiation of the new PGE for 2022 is going to keep you very busy. “We have managed the worst pandemics. We have survived. Now it’s time to take another step, it’s time to take a social agenda, Budgets and public policies to improve the lives of those below. Guarantee our people a good life. And it is not asking for so much” advanced the second vice president of the Government, Yolanda Díaz, of United We Can, before the imminent negotiation with the PSOE to present the project.