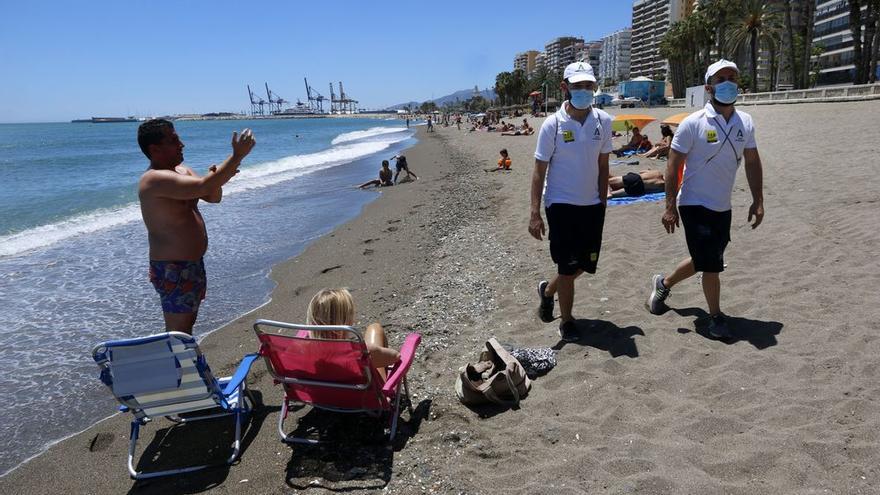 Do I have to wear a mask on the beach? Can you kick me out of excess capacity? Are there beacons on the sand? Who is on the other side of the drone? The summer season advances and the images that the beaches leave in our country vary depending on the stretch of coast. The regulations to control COVID-19 infections among bathers have been adapted to the activity of the virus, especially in those autonomous communities that have registered outbreaks. The last: compulsory use of a mask under a penalty of 100 euros in regions such as Andalusia and the Basque Country.

The news that salt water neutralizes the spread of the coronavirus reassured many ahead of this vacation. However, the protocols that municipalities and autonomous governments have designed are sometimes not enough to guarantee a safe scenario out of the sea. Health spokesman Fernando Simón warned that water is not the only element to pay attention to, since the wind has “an important weight” when it comes to spreading the disease. Therefore, it is essential to maintain the safety distance and control the capacity.

On paper it is clear, but in practice many provinces are being overwhelmed and have even had to close their beaches, as happened last Sunday in Malaga. In others, apps for mobile phones, drones, beach informants or ushers are what the health authorities trust to maintain control on the coast, although not all have the same measures.

Mandatory use of mask

It is the most recent rule in light of the increase in infections this past week. The Andalusian Government included walks on the beach and by the pool among the mandatory scenarios for the use of masks, being able to sanction with 100 euros those who do not comply. Catalonia and Aragon, the main ones affected by sprouts, make bathing or sunbathing an exception, but they do require it when there is another type of mobility.

In Cantabria, Galicia and the Basque Country it must be taken at the accesses to the beaches, but once settled, walking along the shore or during the bath, it is not necessary. Asturias establishes that as long as space is shared with the cohabitants and the security meter and a half is met with the others, it is not mandatory. The orders drawn up by Murcia, the Balearic Islands and Navarra explain that there will be no obligation to wear this facial protection on the beaches. Finally, the Canary Islands and the Valencian Community do not impose its use in any case.

Watchers or “informants” of the beach

This new profession, not without controversy, consists of walking along the shore to inform both the bathers and the authorities of the activity on the beaches. They differ from lifeguards in clothing and functions, although many have complained that they remain unclear. In Andalucia, irregularities in the selection process by the Board They have opened a Pandora’s box, but, in short, the work of these 3,000 auxiliaries is “to inform, not to order.”

The same as in the Valencian Community, where the Generalitat has hired 1,000 unemployed youth to report on health measures for the pandemic. “In the event of an emergency, they will contact 112 and report daily, and also on the degree of occupation and incidents on the beach assigned to them,” reported Ximo Puig. This figure is present in part of Galicia (Sanxenxo), and Cantabria (Santander and Castro Urdiales), Euskadi In the rest of the communities, some have chosen to turn their first responders into vigilantes of the “new normal”.

The control of the capacity was the first measure that worried the municipalities with a beach to guarantee the social distance of two meters and the Government, in its order on the use of the beaches, expanded the space dedicated to each bather to four square meters. Thus, it dictated that limits could also be established in the residence times and in the parking areas. In many, it will also vary according to the state of high or low tide. However, in practice these standards are not so easy to apply.

In Andalusia, the community with the most kilometers of coastline, the second half of July has tested its capabilities to stop the avalanche. As much as the apps, informants or drones offer useful information about the capacity, the solution is sometimes only in the closing. In Catalonia, a system of cameras and video sensors monitors the spaces in some provinces. In Galicia, A Coruña has installed arches and traffic lights that limit the capacity of the beaches to 8,000. In addition, police or vigilante patrols may restrict access to more bathers in various communities when space on the sand is insufficient. Others, like Murcia, trust in social responsibility and have not imposed capacity or surveillance.

Another new profession that emerged from the pandemic is that of a beach usher. In this case, the procedure that was seen in the areas of payment hammocks will be imitated to respect the plots arranged on the sand. “Can I help you?”, Exposes the shirt of the ushers of Galicia. In Gijón, the city council hired a “serene service” to attend the capacity of the three urban beaches. In the Valencian Community, an usher accompanies users to their sector and to their four-square-meter plot in Levante and Poniente.

The parcel system has not been implemented by too many municipalities, so the job of usher is not as common as that of vigilante. On beaches where there are no beacons indicating the distance, the latter can ask people to move a few meters to separate from the one next to them.

Directly related to the capacity point, many governments and municipalities have chosen to take this information to the user’s mobile and have it decide whether they want to go to a beach or go to a more empty one. Almost all the provinces and communities have theirs, and those that do not offer this information on their official pages: AppForo Limitado (Aragón), Mi playa Segura and app de la Junta (Andalucía), Nik Hondartzak (Gipuzkoa), BizkaiUp (Bizkaia ), Social Beach (Benalmádena) and even one to make an appointment in Benidorm.

The use of artificial intelligence to estimate the capacity of the beaches is one of the most striking practices this summer, although it was already used in other contexts. By means of sensors, drones are able to number the number of individuals in a specific perimeter without collecting personal data. In this way, “the numerical data will be collected in order to report to the Local Police and facilitate security services,” said the Mayor of Sagunto (Valencia). Other municipalities of Malaga, Cádiz, Almería and Huelva, as well as Alicante and Pontevedra have joined this method.

Rules in the beach bars

The situation of the beach bars is not far from that of any bar in the urban area. You have to access with a mask -also to the toilets- and keep the safety distance with the other tables or seats. However, they have already started to report infractions in certain beach establishments, such as Motril, which has initiated a disciplinary proceeding against a beach bar for practicing as an open-air disco without respecting sanitary regulations.

Information made with the help of Maialen Ferreira (the Northern Journal), Carlos Navarro (the Valencian Community Journal) and Laro García (the Cantabria Journal).