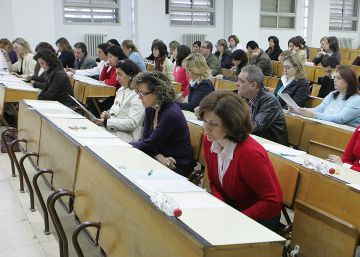 Seven of the 31 opponents with intellectual disability that last June 30 were examined to apply for the positions of administrative assistant of the University of Seville will challenge the examination for its complexity and for not adapting to the regulations in force for this group. The institution, on the contrary, assures that the cognitive adaptation of the examination was proceeded and that it even formed a specific work group. Of the 233 places offered by the university, 17 are for the disabled and 5 of these for the intellectually disabled.

María José Ruiz, who represents the complainants, calls the test "unfair" and "extremely difficult" and denounces that the test was prepared for people without any disability.

This group has also denounced a series of irregularities that occurred during the tests: from the first moment, the university did not provide the adapted syllabi with easy reading, despite claiming it in writing and even asking the Andalusian Ombudsman to force the institution to do it. The Sevilla University it alleges that it was "a remedy that was outside the established deadlines" and that "it is governed by its statutes, where this matter does not appear as an obligation".

As a sign of their difficulty, opponents regret that they suffered a "huge bewilderment" since they spent much of the time of the exam – up to four hours – asking the meaning of some of the words and the meaning of some of the sentences. The question book was separate from the answer book, with the difficulty that this entails. Also, the test began an hour later, a wait that disconcerted them and increased their levels of nervousness.

The University rejects the complaints

The University of Seville affirms that "it did adapt the exam and the conditions for its celebration", for which it constituted a specific work group, whose work focused on "reformulating and simplifying the 80 questions and response options", "eliminating ", Whenever possible," legislation, articles, negative formulations ", or by providing synonyms or brief explanations that facilitate understanding.

The University of Seville has also indicated that the appeal of the opponents was made, as in the rest of the classrooms, at nine o'clock in the morning, "starting as scheduled an hour later". Access to that classroom, precisely, was also authorized for family members and companions of opponents with disabilities.

The duration of the examination, for its part, was established in four hours for the intellectually disabled, twice as long as for the rest of the opponents. This time considers the university that should have been "sufficient" given that the last opponent left the classroom at 13.40, that is, 20 minutes before the end of the exam.

Finally, the institution emphasizes that, once the exam was completed, a collaborator accompanied each opponent to the faculty's Secretariat, without losing sight of the evidence at any time, so that a staff member could make a photocopy of it and they could Take her home. Also, "they were available in the classroom with water and various pieces of fruit to promote their performance."

The opponents with intellectual disability fear that the places for the reserve quota will be deserted and will go to the general quota, a possibility that contemplates the norm. Therefore, they demand that it be rectified and the university convokes a new test for the quota of intellectual disabilities.