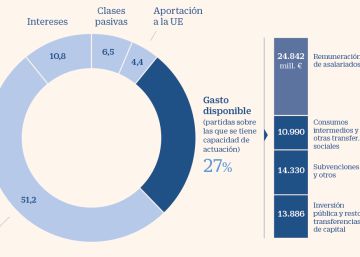 Spain came out a month ago of the procedure for excessive deficit of the European Union in which it had immersed the last decade, and despite having left the corrective arm of Brussels, the EU Executive still asks the Government three fiscal adjustment points to balance the accounts public. Reaching the budgetary balance supposes the difficult task of balancing income and expenses, but in the last month it has become clear that Spain has a wide margin of improvement to spend much more efficiently and thus save resources to the public coffers.

This week, the Independent Authority of Fiscal Responsibility (Airef) presented the last two reports of a total of seven focused on reviewing the effectiveness of more than 30,000 million euros per year of public expenditure. A task that the previous Government of Marino Rajoy commissioned to the independent organism, and that takes the colors to the management of the Administration. State spending, which as detailed by the president of the Airef, José Luis Escrivá, accounts for 40% of GDP, is invested badly, without sufficient design or planning. Not only that, but most public policies do not clearly define the objectives they intend to achieve. Something that prevents effective monitoring and post-evaluation of the results achieved, dynamics that prevent transparency, and therefore the corresponding accountability is carried out.

"In Spain there is a great lack of evaluation of public spending," Escrivá recently criticized, which is why he observes an "extraordinary margin for improvement" in spending management. In addition to evaluating the results and meeting objectives, the Airef defends the need to move towards greater territorial coordination that avoids overlaps, updating confused and outdated laws, and simplifying the complex bureaucracy.

The first game that the Airef enters to analyze was also the largest of the seven: the subsidies, for which the State is spent each year around 14,000 million euros. A very high cost and then not know if they have really been useful or have addressed some of the problems for which they were raised. In effect, the oversight body notes that there is a "clear lack" of strategy when planning and designing public policies, deciding on their budget and translating them into subsidies. And this is because "the strategy, which should be the guiding thread of the entire design of public policy until its application, only enters at the end of the process".

In addition, there is a lack of territorial coordination of these policies due to the limited role played by the autonomous communities in the negotiation tables with the State, as well as the fact that the General Law on Subsidies is unclear and incomplete, based in a delivery system that is sometimes not objective or outdated and with an "excessive administrative burden" for managers and beneficiaries. A whole series of obstacles that hinder transparency and accountability.

The next item controlled by the Airef and one of the most controversial have raised is spending on prescription drugs, which concentrates one in six euros of total health expenditure, just over 10,000 million euros a year. The main conclusion of the agency led by Escrivá is that there is scope to improve the equity of the system while achieving savings for the public purse. On the one hand, the Airef points out that the current co-payment model penalizes workers with low incomes, so it recommends eliminating the differentiation between assets and pensioners and establishing double the income brackets to make it more just and gradual.

On the other hand, stresses that spending on medicines in Spain is higher than the average of OECD countries with a health system comparable to Spain (0.8% of GDP, compared to 0.98% in our country). ), reason why it defends that there is margin to save about 1,000 million a year (10% of the item), mainly though not only, through the establishment of a system of auctions at a national scale to set prices.

A model that is already applied in Andalusia and that, according to the Airef, allows reducing the cost for the State at the time of acquiring medicines due to the greater competition between suppliers. From the pharmaceutical sector, they warn, however, that this model could pose a risk of shortages in some cases. The body also notes the absence of a periodic review of the price of drugs already integrated into the system, and again, points to the poor governance of the territorial enters in decision-making.

Much more forceful is the agency when evaluating the active employment policies (PAE), to denounce the lack of effectiveness of these items to address the high level of unemployment. Each year, these policies represent an approximate cost of between 6,100 and 6,500 million euros, although the Airef recognizes that the calculation may not fully adjust to reality due to the "clear deficiencies" to accurately analyze the data, insufficient and low quality. Specifically, on the State Program Prepares, aimed at long-term unemployed, concludes that "does not improve the likelihood of entering the labor market", but quite the opposite, because "generates disincentives" in the six months of the provision. It only appreciates a positive impact after 12 months, but only in four communities: Aragón, Navarra, País Vasco and La Rioja.

Hence, it defends a distribution of funds linked to the achievement of objectives and that favors the traceability of spending to improve its transparency. So call to look at other European models that, in addition to investing much more (4,089 euros for unemployed in Germany, or 2,752 in France, compared to 470 in Spain), have evaluation systems to improve results and better suit the needs of companies.

Regarding the incentives to hire (usually with bonuses to companies) the Airef notes that "they are not efficient". Another important setback since they account for 40% of the items and that Spain is, in addition, the EU countries that spend more on this type of incentives.

The games dedicated to university scholarships and the promotion of research are practically the only ones for which the Airef asks to increase the allocation. Specifically, the organism maintains that the university scholarships (that suppose near 800 million to the year) have contributed remarkably to guarantee the equality of opportunities, but it indicates that the helps are insufficient for the students who attend the race outside the familiar domicile. On the other hand, it asks to advance the calls for applications and assignments before the start of the course to avoid that nobody is left without studying due to lack of previous resources. It also calls for extending the income tranches to improve equity.

Regarding aid to pre and postdoctoral researchers, it is also important to increase the amounts (currently they represent an expenditure of 300 million, 5% of the R & D budget) to make them more competitive internationally and retain talent. He argues that it is necessary to review the award criteria to reduce discretion and adapt these scholarships to the needs of the private sector, so that talent can be integrated into the productive fabric of the country and the quality of scientific production is improved.

The area that probably fares worse, together with that of aid for the unemployed, is that of the Reindustrialization and Industrial Competitiveness Program (around 620 million annually) that the Airef directly recommends eliminating, at least in its current configuration. And it perceives a null impact on the competitiveness of industrial companies, and very few effects on employment that, anyway, disappear after five years. The program consists of loans with advantageous conditions that have only benefited less than 2% of companies in the sector, and that have "a high cost" since interest does not compensate for defaults.

Finally, the Airef observes that the Universal Post Postal System has a much higher cost than in other countries around us. The service (which costs over 150 million a year), is provided permanently throughout the territory and at an affordable price and accumulates five years with operational deficit (losses). Therefore, the Airef recommends reducing the number of correspondence days so that it is not daily (as in Italy), automating processes to improve productivity and outsourcing the branch network. It also calls the transition to much more competitive markets, such as the urgent parcel service.