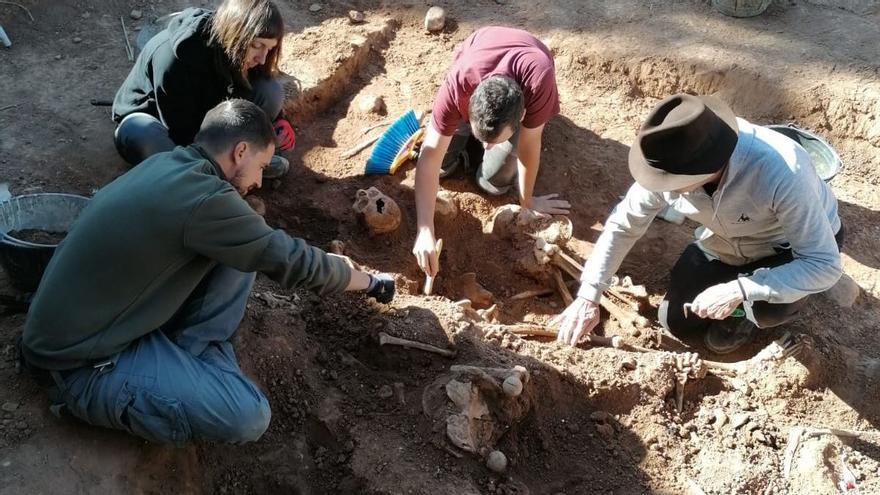 The remains of the maternal grandfather of Joan Manuel Serrat can be found among the 430 shot from Belchite they are unearthing and trying to identify a team of archaeologists and a memorialist association. Manuel, which was the name of the ancestor of the singer-songwriter, he was secretary of the city council, chaired by the socialist Mariano Castillo Carrasco.

That fact cost him his life at the outbreak of the civil war, as well as his wife, Juana, which could be buried in a niche, although it is not known with precision where its remains rest. “We will need Serrat’s own DNA to carry out a correct identification “, has indicated Isidro Vaquero, which belongs to the local entity that carries out the surveys with the help of the DGA.

“The daughter of the two reprisals and the rest of the relatives left the town as a result of that, and with good reason,” says Vaquero, who has indicated that his association is trying to contact Joan Manuel Serrat, who was born in Barcelona but feels a great attachment to Aragon, as reflected in some of his songs.

The massive shootings at Belchite were the work of Falangist elements and occurred at the beginning of the war, in the summer of 1936, before the town became the center of a battle that caused its partial destruction. Of the three and a half hundred reprisals around A hundred resided in the nearby town of Mediana and another six were from Fuendetodos, while the bulk came from Belchite.

At the moment, the excavation is focused on a grave located inside the cemetery, to the left of the entrance, but if the organizers of the search receive the necessary authorizations, the surveys will be extended to other parts of the cemetery (the right side) and outside, in front of the wall that surrounds the enclosure.

The location of the fossa on the right side has been possible thanks to the research carried out by the Aragonese historian Julián Casanova, explains Isidro Vaquero.

Against the law of silence

The memorialist association that carries out the excavation is named after Mariano Castillo Cascarro, in memory of the Republican mayor of Belchite, who committed suicide in his cell, after being arrested in the first days of the military insurrection. In addition, the rebels shot his wife and a brother.

As for the fossa on the left side, many older people in Belchite have known their entire life about its existence, although for decades it has reigned a kind of law of silence which has postponed until now the dissemination of the serious events of the beginning of the war of 36, but not the story of the subsequent battle around the urban area, which has been widely publicized since it occurred.

“All this began to move a year and a half ago, when José Vidal, president of the memorialist association and socialist councilor of Belchite decided to create the entity in order to recover that part of the history of the town”, Indicates Vaquero.

The victims of the shootings also included Vaquero’s maternal grandfather, who was president of the UGT in the area. “It so happens that one of the people who was going to be shot escaped death at the last moment and was able to tell the victims’ families how things happened,” says association member Mariano Castillo.

Bones in the grave of Belchite. MARIANO CASTILLO ASSOCIATION

The executions were carried out in several batches that took place between August 1 and September 9, 1936 in different places: in jail, in Plaza Nueva del Viejo Belchite and in the cemetery.

At the moment, the excavations, which focus on a 70 square meter grave, they have already discovered skeletal remains of 25 people. “This is the first layer of the pit, in which we will continue digging, because we do not know its depth,” adds Vaquero. “We know that there are more than a hundred people here and that their bones are mixed with those of other previous burials, ”he continues.

For the identification of those shot, Vaquero emphasizes, It will be necessary to carry out the DNA test, so he calls on the neighbors of Mediana, Codo, Belchite and Fuendetodos who lost loved ones in the war, to provide blood samples. The test will take place from November.

“We began the excavation on September 30 and the greatest difficulty we find is that of differentiating remains from different periods”, points out the archaeologist Gonzalo García, one of the co-directors of the project. In addition, he continues, the bones of different people appear mixed.

“Some skeletons They appear face down and we have found one with his hands and legs tied, which reveals a great cruelty“, says the archaeologist, who stresses that the bodies must have been thrown into the pit” in any way. ”

As the excavation progresses, Gonzalo García points out, objects of everyday life, such as buttons and buckles, as well as remains of very deteriorated clothing come to light. «We have even found a graphite lead from a pencil, the only thing that remains after the wood has rotted, “he says.

Until the arrival of the rebellious Army in Belchite, the town experienced numerous summary executions promoted by elements of the Falange. Of the total of 430 executed that have been counted, 325 were from Belchite himself, 100 came from the nearby town of Mediana de Aragón (whose population was decimated), six from Fuendetodos and at least one woman lived in Codo.