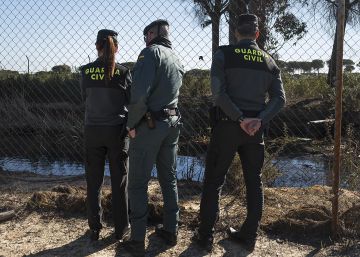 The result of the tracing work carried out in Spain by Seprona agents – the nature protection service of the Civil Guard – In search of illegal water withdrawals, it helps to understand the magnitude of the problem: in just five months, 1,410 wells have been located that irregularly extract water from underground aquifers and 47 rafts from which this resource was later distributed, normally, to agricultural plots. In total, 107 people have been arrested and investigated and catchments have been located in 42 provinces.

The Seprona has carried out this operation systematically throughout the national territory – it has been called Mizu – against the theft of water from this type of wells, a phenomenon that has been warning for decades. Historically, there have been black spots of well-known water theft and, normally, associated with the impacts that this subtraction causes in protected ecosystems, like Doñana. “After the operations we have been doing in recent years, both in the Doñana National Park and its surroundings, as in Murcia or the Tables of Daimiel, we have seen that this problem is going further, ”said Lt. Col. Jesus Galvez, Chief of Operations of Seprona. “And we have decided that a national campaign had to be launched,” adds Galvez.

After the increase in the deposits they cause overexploitation of aquifers There is “the recent acceleration of climate change along with the exponential crop change that has been occurring on all areas of the Spanish geography, accompanied by a general rise in temperatures, especially in the Mediterranean,” he said this Sunday in a press release the Civil Guard. The armed institute recalls that these perforations represent, in addition to an “illegal activity”, an “important risk for people and animals” when the withdrawals are abandoned.

Although in the field of agriculture and environmental protection the problem has been known for decades – “since the beginning of Seprona in 1988 there are complaints by wells,” says Galvez, “just a year ago the risk of this type from uncontrolled wells became more patent. It was with the case of little Julen, the minor who died after falling into an irregular well located in Totalán (Málaga).

After the accident, the environmental organizations and those responsible for Administrations warned of the enormous amount of illegal wells that exist in Spain, beyond the classic blackheads of Doñana or Murcia. Teresa Gil, responsible for the WWF water program, remembers that more than five years ago her organization pointed to the existence of more than 510,000 wells, according to data provided by the Government. Greenpeace, subsequently, raised that figure to one million fundraisers.

When Julen’s case was registered, the Ministry for Ecological Transition argued that “an inventory of illegal uses is not available,” so he declined to offer figures. Of course, disseminated data on the files opened by the different hydrographic confederations against illegal collection. On average, between 2014 and 2018, 1,242 such files were initiated. The basin that heads the open files every year is that of the Guadalquivir.

However, in the operation carried out by the Civil Guard, the province that has accumulated the most infractions has been Valladolid (with 266), followed by Málaga (175), Murcia (131) and Badajoz (122). The Civil Guard has valued this Sunday that this operation has allowed to achieve “a global vision of the problem at the national level that allows unifying criteria for future actions.”

Galvez, who announces that this year will be repeated this year, explains that the problem of illegal wells is something that does not occur in other countries of the European Union. “In Spain specifically there are two issues that are very important police: the issue of water and that of forest fires,” abounds. And in both, climate change, according to scientific reports, can further accentuate the impacts.

“The problem has been increasing. It has not stopped in recent years and has gone to more, ”laments Teresa Gil. And that has consequences. Gil gives as an example what happened in Lucena del Puerto (Huelva), the epicenter of the impunity robbery of the aquifer water of which Doñana lives in part. After years of litigation, the Guadalquivir Hydrographic Confederation, under the Ministry for Ecological Transition, has culminated the closure of 77 wells and several rafts this summer. “The problem was not cut when it was emerging,” Gil says. And when the closure was executed, in which the Civil Guard also had to collaborate, there has been great opposition from some farmers who had incorporated a free water to their production systems. “In addition to the damage to ecosystems, it is a problem of unfair competition for farmers who do have legal funds,” Gil adds.

The problem in Spain has acquired such dimension that the European Commission, after several notices, denounced a year ago to the Government due to the lack of action against the theft of water in the surroundings of Doñana. In the balance of its operation, Seprona highlights the support provided for the closure of the 77 wells, an operation initiated in its day by the Civil Guard. During the past year, in addition, another 37 illegal wells were detected in Almonte (Huelva) and 16 people were charged.