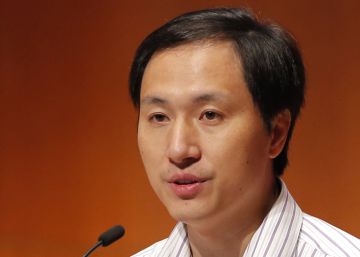 The Chinese scientist He Jiankui, creator of the first babies genetically modified, has been sentenced this morning to three years in jail and to pay a fine of three million yuan (380,000 euros). A Shenzhen court has found him guilty of “illegally carrying out the genetic editing of several human embryos for reproductive purposes.” The information, advanced by the official news agency, Xinhua, also confirms that there were three children born as a result of the experiment.

He Jiankui, known as a result of the event as “the Chinese Frankenstein”, announced in November 2018 that he had manipulated two human embryos through a genetic editing technique, known as CRISPR, in order to make them immune to the AIDS virus. The twins, who received the names of Lulu and Nana, were born “weeks ago” and were “in perfect health.”

After two days of silence, the geneticist, an employee of the University of Science and Technology of Shenzhen and trained at the American universities of Rice and Stanford, confessed the existence of a third fertilization at a scientific summit held in Hong Kong. “I am proud, I am very proud,” he said then.

He Jiankui then faced a huge amount of criticism from his colleagues, most of whom questioned his claims and regretted his lack of ethics when carrying out an illegal procedure in most countries of the world, China among them. Protests were joined by Nobel Prize for Medicine David Baltimore, who described his conduct as “irresponsible.” 122 academics from the Chinese scientific community published a joint statement stating that “any attempt” to make changes in human embryos through genetic modifications is “crazy”, and that the birth of these babies represented “a high risk.”

This Monday, the Shenzhen court has ruled that He “craved fame and fortune,” and that he skipped “the national regulations on scientific research and medical management deliberately.” The ruling also states that I have falsified documents and provided false information, “exceeding all ethical lines”, in order to achieve the implantation of genetically modified embryos.

Two collaborators, Zhang Yili and Qin Jinzhou, workers from two medical institutions in the area have been convicted. The three defendants have accepted the charges. Likewise, several people involved in the procedure, whose final number has not transcended, have been blacklisted and will be banned for the life of any other job related to the medical world.

“This sentence supposes a message very awaited by the scientific community”, emphasizes Lluis Montoliu, researcher of the National Center of Biotechnology and expert in the use of CRISPR technology. “It is an important condemnation that silences the criticisms that said that in China all kinds of experiments were possible without consequences. This sentence shows that this is not the case and, beyond the years of jail and the fine, the most relevant in my opinion is that Jiankui will be disabled for life to carry out more research in this field, “says Montoliu, who is also the founding president of the International Society for Transgenic Technologies.

A key fact of the sentence is the existence of a third baby whose genome was modified by Jiankui’s team. The identity and sex of this third baby are unknown.

Each of the billions of cells of a person carry inside a copy of their genome, a set of 3,000 million letters of DNA that are the instruction book for the proper functioning of all vital functions. There are many typos in that genome that can cause diseases. Jiankui tried to modify the genome of the embryos to reproduce a beneficial erratum: 39 letters less in the CCR5 gene that confer its immunity to the AIDS virus. The problem is that the CRISPR technique is far from perfect, but it can also introduce additional errata in the genome that can be dangerous for the baby’s health. In addition, CRISPR often does not edit all cells, but only one part, thus generating human beings with two different genomes.

“A few weeks ago, part of the manuscript was published in which the team described their experiments[obtainedby[obtenidoporTechnology Review]. It was a scandal because the text showed that Jiankui knew that some embryos had not been edited correctly and had the possibility of not implanting them in the mother, but decided to continue with the procedure, which is aberrant, “says Montoliú.

How to use an NFT as a Twitter profile picture