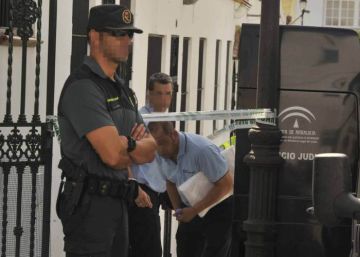 “I know what I have done. Do what you have to do, ”snapped Isidro S.A. to the civil guards who on the morning of June 1, 2017 insistently knocked on the door of their house in Arcos de la Frontera (Cádiz). The man, then 44, He recognized that he had pressed his nine-month-old baby's face against his chest until he suffocated him. He did it after assaulting his partner and because, in hallucinations, he said he had received some messages on his mobile that warned him that "the Apocalypse would soon arrive."

More than two years after that event that shocked the usually quiet town of Arcos –of 30,700 inhabitants–, a sentence condemns Isidro S.A. to 23 years, four months and 15 days in jail that you must serve in a prison that can treat you with the psychiatric illness you suffer. Following the guilty verdict issued by a popular jury, the Eighth Section of the Provincial Court of Cádiz – based in Jerez – considers Isidro guilty of a murder crime with the aggravating relationship, the incomplete exemption of psychic alteration. In addition, he is also found guilty of a crime of injury to his ex-partner, although not of habitual abuse, as the private prosecution also requested.

Sometime between 6.30 and 8.20 in the morning of that June 1, Isidro covered his baby's nose and mouth "with the aim of ending his life", as stated in sentence 350/19 of 5 November to which EL PAÍS has had access. The little boy, born just nine months ago, slept in bed with his parents, when the father began to suffocate him. It was of little use that his partner and the child's mother, also in the bedroom, tried to avoid murder when he woke up. The now condemned "hit this one, struggling with her, causing her injuries." Then, "he pressed the baby's face against his chest, suffocated him" until he died by suffocation, as recorded in the proven facts.

Isidro justified the murder of his son because he thought he received messages on his mobile phone that told him "that he had to suffocate the baby" and "that the Apocalypse would soon arrive," as established. However, during the trial held in mid-October, the defendant denied remembering "absolutely nothing" of what happened. In fact, one of the keys to the case was to determine to what extent the defendant suffered or not a mental disorder. This question determined the positioning of the defense that claimed that the man was not aware of his actions. In front of him, the private prosecution requested the reviewable permanent prison and the Prosecutor's Office requested psychiatric detention, also permanent.

Finally, the sentence has considered proven that the convict suffers a psychotic disorder with hallucinatory and delusional symptoms that caused a serious impairment of the ability to understand and the annulment of the will. In its pronouncement, the jury has considered that, in fact, the distress of helplessness concurs. Or, what is the same, that Isidro “took advantage of the situation of total helplessness in which his son was” and that it was of little use for the mother to be in the room, since “she is deaf and had the hearing aids removed Well, I was sleeping. ”

Although the sentence has proven that the couple received several blows and injuries while trying to prevent the murder of their son, the jury has acquitted the man of the crime of habitual abuse asking for the accusation. The jury only condemns him for injuries with aggravating kinship, for which he is sentenced to four months and 15 days in prison. For that and for the murder of the little one, Isidro S.A. You will not be able to get close to your partner during the 12 years following your release from prison, in addition to compensation of 87,900 euros. Against the judgment it is possible to appeal to the Civil and Criminal Chamber of the Superior Court of Justice of Andalusia (TSJA).

The event caused a profound impact on Arcos, the most important town in the Sierra de Cádiz. The mayor of the municipality, Isidoro Gambín, decreed a day of official mourning on the occasion of the "deleasable murder of a child under eight months and the brutal beating of his mother," he explained then. Despite this, the then president of the Junta de Andalucía, Susana Díaz, who described the case as sexist violence in her conviction for what happened manifested through her Twitter profile.