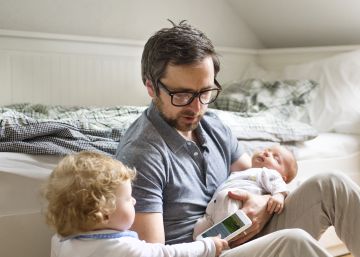 The Social Court of the National Court has just cleared one of the doubts that arise in numerous companies when applying the extended paternity leave.

Specifically, it has determined that the birth permits included in the collective agreements of the companies must be added to the legal paternity leave in force at all times.

In a sentence of last November 29, that the General Council of the Judiciary (CGPJ) has now disseminated, the National Court gives the reason in its entirety to a demand of the cadres and Professionals union and, in part, to three others of CC OO; UGT and CGT against the company Renault España SA, which sought to eliminate four days of leave for the birth of a child or six in case of displacement, which includes the interprovincial collective agreement of this company.

The Renault address He understood that he could eliminate this permit for up to six days because the Royal Decree-Law of urgent measures to guarantee equal treatment and opportunities between women and men in employment, which entered into force on April 1, 2019, it gradually extended the paternity leave at 16 weeks to match that of the woman, and, at the same time, eliminated the two-day leave that included the Workers’ Statute for parents.

In fact, the rule now determines that “the birth will suspend the employment contract of the parent other than the biological mother.” For these reasons, the company eliminated the permit included in the car agreement.

Nevertheless, the ruling of the National Court expressly recognizes “the right of workers affected by the conflict to enjoy the birth permit for a child of four working days that can be extended to 6 calendar days in case of displacement contained in article 30 of the Renault Interprovincial Collective Agreement of Renault Spain for the years between 2017 and 2020 ”.

The court adds that this paid permit or license that was in dispute “assists all workers whose birth or adoption of a child has occurred after the entry into force of the Royal Decree-Law of March 1”. In this way, the company must replenish the days to those workers who would have refused.

Generally, these permits that have now been called into question were included in the agreements to improve the two days determined by the Workers’ Statute for parents until 2007. But since that year, and to date, the paternity leave has been progressively expanded until 12 current weeks and 16 planned from January 1, 2021, when this permission will be fully matched to that of the mothers.

Among the arguments of the court to give the reason to the workers is that the agreement is prior to the elimination of the two-day permit that included the Workers’ Statute. “This means that the situation of concurrence generated by the collective agreement (of Renault) and the Statute of Workers in the field of regulation of the employment relationship will apply the rules of concurrence.” That is, “the principle of more favorable norm for the worker and the application preference of the minimum of necessary Law, which represents the Royal Decree-Law, will be applied. For both reasons, the National Court determines that the permission for the birth of a child of the collective agreement cannot be eliminated and must be added to the legal paternity leave paid by Social Security.

However, this sentence it was appealable before the Supreme Court, something that the company has already done, so it will be this court that must decide on the matter.

This conflict is not being widespread among companies. There are even companies that, on the opposite side, have advanced to the law and have already equated the paternity and maternity leave planned for 2021, as is the case of Holaluz or Pronovias.