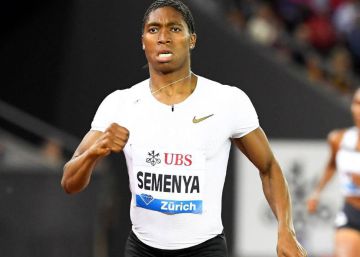 The South African athlete Caster Semenya, 28, will not be able to defend her 800m title at the World Cup to be held in Doha from September 27 to October 6 after the Swiss justice has revoked the temporary suspension of the International Federation regulations of Athletics (IAAF) that affects the hyper-logical athletes. The Arbitration Court of Sport (TAS) ruled on May 1 that in order for Caster Semenya and other women to continue participating in women's tests between 400m and 1500m they should artificially reduce their high blood testosterone levels or else they would have to Participate in the men's category tests.

Semenya, which was directly affected by this new regulation, appealed, obtaining then the temporary suspension, although not for a long time. "I am very disappointed to not be able to defend the title that cost me so much to win, but this will not give me up to continue in my fight for the human rights of all the athletes involved," said the South African in a statement published by Dorothee Schramm, his a lawyer.

In the text, Schramm reported that on Monday “a single judge of the Supreme Federal Court of Switzerland revoked the previous decisions that had temporarily suspended the IAAF regulation pending the outcome of Caster's appeal against the decision of the TAS” . "This decision will prevent Caster Semenya from defending his World Cup title," added the legal representative of the double Olympic champion. “We will continue to defend Caster’s appeal and fight for fundamental human rights. A career is always decided at the finish line, ”concluded the lawyer.

Semenya will remain immersed in a long dispute with the IAAF, which revolves around the new rules announced a year ago by the international federation to limit the access of female athletes with high testosterone levels to women's tests between 400m and 1,500m.

The TAS admitted a month ago that the rule was "discriminatory," but added that such discrimination was "a necessary, reasonable and proportionate means to meet the IAAF's objective of preserving the integrity of women's athletics in restricted events." For marital status, the South African athlete is a woman. But for the IAAF, women like Caster Semenya, with a certain difference in sexual development, are "biological men," a notion highly criticized for the defense of the athlete.

For its part, the International Olympic Committee (IOC) has created a group of experts to reflect on this issue. The IAAF regulation entered into force on May 8, although on June 3 the Swiss Supreme Court decided to suspend it provisionally until it finally ruled on this issue on Tuesday.

This decision caused Semenya, who refuses to undergo the hormonal treatments required by the IAAF, to compete again and win the 800m at the Stanford (California) athletic meeting on June 30 with a time of 1m55,70s. Now he will run out of World Cup. "The first chapter of my life ends and the second begins," the athlete said Tuesday.