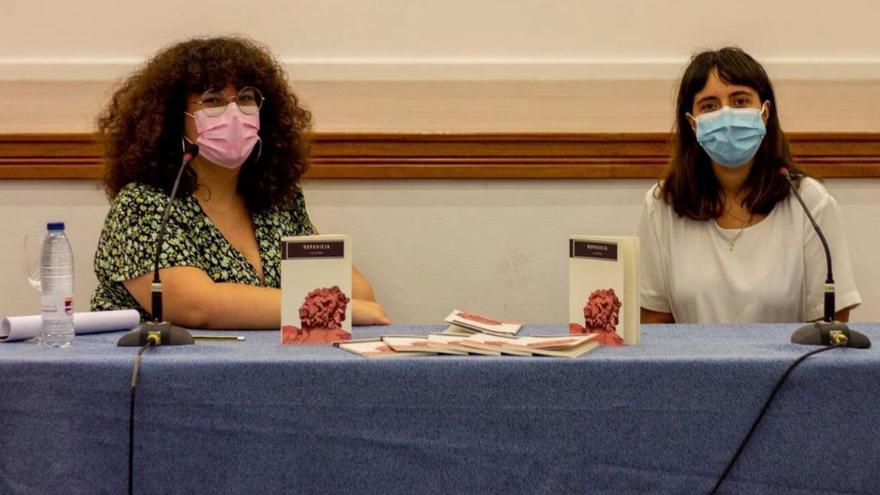 Around the writer Dolores Campos-Herrero literature grows thanks to the multiple calls that are made in her name for the Canary Islands Day of Letters 2022. Today is the big day of literature in the Archipelago and three voices come together on this occasion, those of the Venezuelan journalist and writer Sebastián de la Nuez, the journalist and writer from Tenerife Aida González and the cartoonist and writer from Lanzarote Lana Corujo, who publish their titles under the mantle of the author.

The poems 'nine two eight' and 'Write?' arise as a result of the annual meeting held by the Fundación Mapfre Guanarteme with the purpose of commemorating this day and promoting regional talent with the promotion of the Canarias en Letras editorial collection, directed by the writer and editor Félix Hormiga. Lana Corujo and Aida González did not believe it when they were called to participate in this project since, although chance had played its part, they share common points in their respective short but intense literary careers. “There is total freedom”, that is the first brand with which they identify their publications.

The writers Aida González and Lana Corujo at the presentation of 'ropavieja'.. | | LP/DLP

Known through social networks, they coincided for the first time in the signing of the poems of Pueblo yo de la Tenerife in Madrid and, later, they would join for the first time when presenting the first work, Ropavieja, by the Lanzarote artist. "In our writing there are many points in common without having looked for them," they add in the conversation.

On the one hand, 'Escrito', by González, alternates in two stages a reflection on writing from irony and disorder devoid of the norm that leads to «a more feminist idea that takes this writing as something earthly and everyday, which it contains and honors him.”

Meanwhile, Corujo started 'nine two eight' thanks to a childhood friend with whom he shares an indelible memory: the landline numbers they called each other so many times when they were at school. Those afternoons at grandma's house, because her parents were away for work, were routine during the illustrator's childhood and youth.

“It is a topic that fascinates me a lot because of how it marks us as people, so this is a beautiful tribute to the friends and grandmothers who have marked our generation,” she declares.

They coincide in surrendering to this figure with other authors of their generation such as Andrea Abreu, Yeray Barroso or Elisa Victoria. Another coincidental coincidence: both dedicate the copy to their grandmothers, as a sign of the recovery of everyday life that "helps to demystify the family and remove it from the common places," adds González. Regarding the Dolores Campos-Herrero Regional Short Narrative Award, the second edition has fallen into the hands of Sebastián de la Nuez, convened by the Ministry of Culture of the Cabildo de Gran Canaria, whose presentation to the public is today at 7:30 p.m. Island Library.

'El llanto de la memoria' is the compilation of five stories that orbit between memory, the journalistic chronicle and uprooting and belonging, at the same time, to the land in which one was born and to which one never returned. “It is a geographical and vital itinerary”, comments the writer who has returned to the Canary Islands after residing for a large part of his life in Venezuela, from where he left due to the difficulties the country is going through. 'The mad dog pension', '2014', 'This job is not for cynics', 'A gigantic red dahlia' and 'Umbilical cords' are the five episodes that are linked together. «In the first story I honor my confirmation godfather, Antonio Ojeda, son of the diaspora that existed in Venezuela from the Islands in the post-war period of the 1950s, then I talk about my stay in Madrid and how it has affected me with the Venezuela's prison situation," he admits, "everything is crossed by things that one is digesting, perhaps unreal, but that one tells to make reality more visible, precisely." As happened with Campos-Herrero, journalistic observation is a double-edged sword that keeps the author alert. «She is a great writer with a very good sense of chronicle, but little is achieved, I wish they would publish more!» He warns.

The Canary Islands Day of Letters is an occasion to celebrate the cultural pulse of the Archipelago and keep alive the voices that give new stories through public and private institutions that are involved in reinforcing this social fabric. For this reason, the Canarian poets maintain the need to continue promoting this event, which continues with various activities throughout the year and, in addition to discovering, forces us to analyze and understand the context of the works of the honored artists.