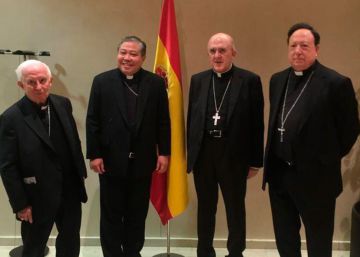 The rise of ultraconservative political forces that proclaim themselves openly confessional and impose laws against freedom of conscience and equality, such as Justice Party in Poland and the Civic Union of Víktor Orban in Hungary, turns the International Day of Secularism and Freedom of Conscience into a special event. It is celebrated on November 9 and coincides in Spain with expectations of a coalition government between parties that attended the recent elections with the idea that "the State will only be truly democratic when it is certainly secular." Secular Europe underlines it in the manifesto that commemorates two world landmarks in this regard: on December 9, 1905, when the Law on the Separation of Churches and the State is approved in France, and the proclamation by the UN of the Universal Declaration of Rights Humans, December 10, 1948.

Freedom of conscience, secularism, neutrality of the State in the face of religious fact, review of the privileges of the Roman Church in Spain, teaching of Catholicism in schools with public money, payment of the salaries of bishops and priests in charge of the Treasury, reform or suppression of the so-called Agreements with the Vatican State ... For the first time in democracy, parties with possibilities of forming Government propose in their programs to reflect on the legislation the increasing secularization of society as a result of the low social value of religions.

The manifesto of secular Europe says: "Govern who governs, the result of the last elections, secularism and freedom of conscience must be part of the measures to be taken for full democratic coexistence, overcoming the arrears and the existing passivity and defaults" . The main organization of Spanish secularism claims for this “the denunciation and repeal of the 1979 Agreements with the Holy See, and those of 1992 with other confessions, as an inexcusable requirement to be met because they are included in the PSOE and United Podemos electoral programs "

It also asks to give priority to the public and secular school, "free of religious indoctrination or of any kind, as a way to overcome the inequality generated by an educational system of concerts with the Catholic school financed by the public treasury", and abolish economic privileges and prosecutors of the Catholic Church by enacting a Freedom of Conscience Law that covers those "necessary measures." The manifesto relates the presence of ultraconservative forces in several EU governments with the rise in Spain of the Vox party, which they describe as extreme right or as "ultra-Catholic fascism."

When the bishops asked to vote no on the Constitution

The secularist movements perceive in Spain a regrowth of state confessionalism, nothing concealed as reflected in the vote on Vox and the decision of the Government in charge of hiding, against a mandate from Congress, the report made by the Ministry of Justice on the tens from thousands of registrations of public goods, made by the Catholic Church. Lay Europe severely denounces that drift and recalls how outstanding bishops such as the archbishop of Toledo and primate of Spain in 1978, Cardinal Marcelo González Martín, issued “pastoral instructions arguing the rejection of the Constitution in the referendum of December 6 of that year "

To ask for no, the influential prelate argued that the Constitution had “worms that inflict the whole apple, making it harmful or unacceptable,” omitted “real and not only nominally, from all references to God, and was“ in reality a safe conduct for legalized aggressions against inalienable rights of man ”.

The cardinal who then held the primacy of the Spanish bishops also held: “For lack of superior principles, the Constitution protects a permissive society, which, as the Episcopal Conference warned opportunely, is not reconcilable with a society of ethical foundation; it is contrary to the valuable exercise of freedom; does not sufficiently guarantee freedom of education and equal opportunities; it does not protect the moral values ​​of the family, and opens the door so that the marriage, indissoluble by divine and natural right, is attacked by the plague of a divorce law. ”