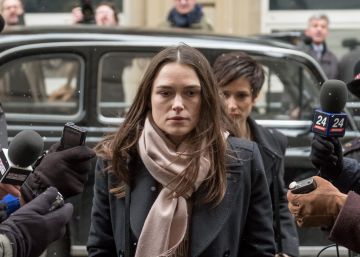 The difference between the correct or even solid political cinema and the truly deep and clairvoyant is in the time elapsed between the events he is narrating and perhaps denouncing and his year of production. The greater the distance, the work may end up containing a greater historical value and weight, but its value will be incalculably less. The Green Zone, War film with political connotations about the invasion of Iraq by the US army in 2003, it was more than five years late. The film was from 2010 and at that point the fallacy of the existence of weapons of mass destruction of the army of Saddam Hussein was already almost perogrullo matter.

Secrets of state, British production on the role played by a low-level spy in leaking the true intentions of the US government in the UN Security Council, pretends to have the appearance of an American film conspiranoic from the sixties and seventies. He has not just achieved it in his formal style, and is also late in his conclusions. His revelations have been proven for years. It is a work with a tendency to historical solidity, but never lucid or agitating, no matter how much those responsible for that lie, former President George Bush Jr. and Prime Minister Tony Blair, along with their minor companions, have not legally responded to their acts

Set in the days immediately before and after the occupation of Iraq, which began on March 20, 2003, the film attempts to connect in its purely formal elements with those American masterpieces of the seventies, of All the president's men to Network, a relentless world: in his dark, metaphorical photograph of his moral universe and the indecency of power, here more deadly than disturbing; and in the dissonant soundtrack as a reflection of the absence of melody. But neither the South African Gavin Hood is Alan J. Pakula or Sidney Lumet, nor the script of the marriage formed by Gregory and Sara Bernstein, based on the research book The Spy Who Tried To Stop A War, published in 2008, it has the subtlety, depth and nuances of those great works.

Hood's film is didactic in the reflection of the two aspects of the story: that of the Cheltenham spies, the nerve center of the British information agencies, and that of London journalists who investigated the matter after the slap of a translator of the headquarters of communications. However, too many times it seems that his most everyday dialogues, those of the spy in his home or with lawyers, and those of reporters at the headquarters of the The Observer, the newspaper that published the filtration, are exposed from the conviction of the present of 2019, with the consequent full knowledge of the past of 2003. That is, part of the worst that can happen to political and historical cinema.

Of course, the complaint contained in the film about US and British pressures on the members of the UN Security Council is still in force, together with the attempt to listen to their communications, in order to reach a second resolution that would give international legality to war. And that his narration, consistent but sometimes more similar to a report than to an intrigue, is fully understandable. But it also does not look like the movie that will provoke the tremor of Tony Blair.