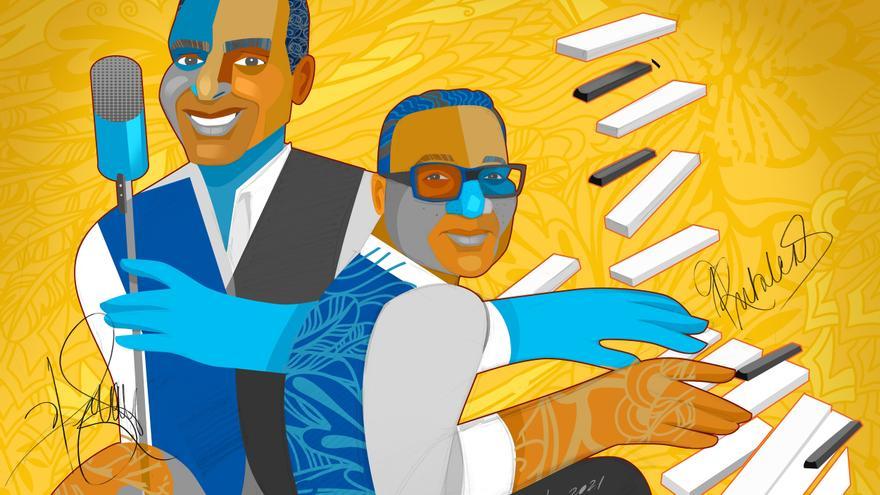 Miami, Jul 2 (EFE) .- The singer Jon Secada and the jazz composer and pianist Gonzalo Rubalcaba make their debut in the phenomenon NFT (Non Fungible Token) with a digital art work created in conjunction with the Venezuelan artist Edo and on sale by Internet.

"I believe in the future of the NFTs. They are going to be a positive element, since they give the consumer the opportunity to acquire an exclusive product," Secada, of Cuban origin like Rubalcaba and winner of two Grammy Awards, told Efe.

Secada and Rubalcaba, winner of two Latin Grammys and considered one of the capital figures of Afro-Cuban jazz, united their musical talents in the album "Solos" (2021), a tribute to the Cuban "filin" from which precisely the first work of digital art of both, thanks to their encounter with Edo.

AN NFT TO IMMORTALIZE A CONCERT

"'Solos' is an album with an artistic vision, I wanted to find a way to immortalize it and it was at the moment that I saw Edo's work that I knew that it should be him who gave that audiovisual stamp to the musical encounter between Jon and Gonzalo" Julio Bagué, president of the Oleta Producciones record label and producer of the album, told Efe.

From today and for 15 days, the NFT is on sale on the Marketplace Opensea platform with a starting price of $ 10,000

An NFT (Non Fungible Token) is a digital work whose authenticity is guaranteed by a cryptographic key on the blockchain, an art that lasts over time, impossible to lose or falsify, according to the operators of this artistic market.

The auction winner will win the original master of an unpublished version of the song "Soy Tan Feliz", composed by José Antonio Méndez, produced by Julio Bagué and performed by Secada and Rubalcaba, as well as a digital artwork created by Edo and a physical pencil sketch also of him and formed by Cuban musicians.

There are no copies of the three works that make up this NFT.

Secada, one of the Latin musicians who previously succeeded in making the so-called "crossover", the entrance to the Anglo-Saxon market, is happy with the foray into the world of digital art.

"We decided to do an NFT to support the project and our careers in an exclusive way that has never existed," the singer told EFE with hits such as "Another day without seeing you" and with more than 20 million records sold worldwide. .

Eduardo Sanabria, Edo, who was the cartoonist for the Capriles group newspapers in Venezuela for 15 years and left his country six years ago, told Efe that the project with Secada and Rubalcaba arose "by chance."

They invited him to the house of the pianist, who recorded an album with jazz legend Dizzie Gillespie in the late 1980s, to witness the intimate YouTube concert in which he performed "Solos" with Secada.

Previously, producer Bagué had visited the Edo "pop" art exhibition organized by the Doral Museum of Contemporary Art (DORCAM), in that city of Miami-Dade County, and had offered to "do something together."

The result is the NFT that goes on sale today at OpenSeas, where Edo has sold its first digital works.

"Time will tell what happens with the NFTs," says Edo, who believes that it will take time until people, especially the elderly, understand that "they are not selling smoke."

The visual artist stressed that it is something that is natural for young people of 20 or 25 years, as they are used to buying intangibles for their role-playing games, but there is "a long way to go" for NFTs to be accepted by the public. in general.

In the art world it is different, there are many people "experimenting", emphasizes Edo, who in the work in which he portrayed the intimate concert of Secada and Rubalcaba painted the piano keys in air like a mirage.

In "Solos" the Cuban musicians include classics of the Cuban songbook such as "Contigo en la Distancia" and "Tú me accustomed", in addition to eight 10 other songs.

"For us it was very important to remain firm in what we wanted to do, which was for people to listen to songs that were part of a story, nostalgically romantic songs, of love, that have been known for decades," said Secada and Rubalcaba when presenting the disk.

The link to bid in the auction is https://bit.ly/3ydvgjt.