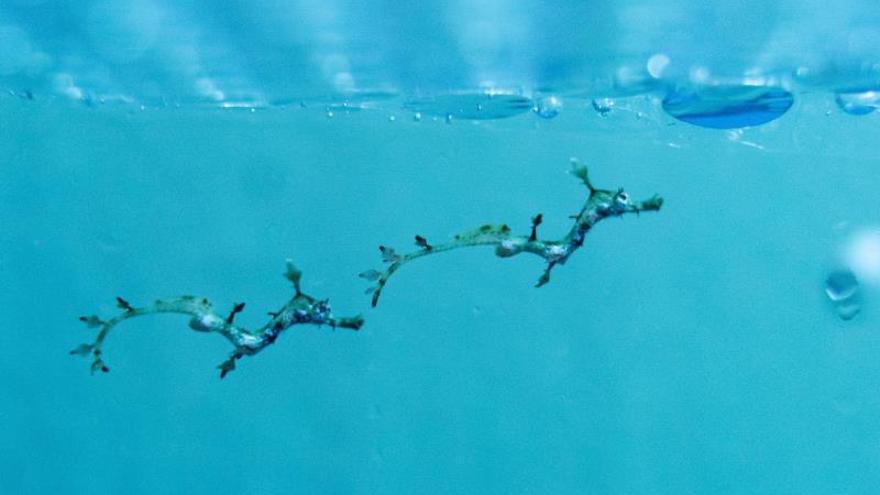 Twenty-four sea dragons have been born from two different layings in the Poema del Mar aquarium from Las Palmas de Gran Canaria, which thus becomes the first center in Europe to reproduce this peculiar Australian species, a cousin of seahorses.

Still closed due to sanitary restrictions derived from covid-19, andhe Poema del Mar experienced the first of the sunsets on April 28, with the birth of the offspring last June.

The joy this year for the caretakers of the facility has been twofold, with another laying on July 21 with just-born pups And although they are only one centimeter in size today, they are growing rapidly in their new home.

Sea dragons (Phyllopteryx taeniolatus) are a species especially sensitive to the environment, protected by its vulnerability and its extreme peculiarity, which makes it a very difficult type of seahorse to breed in captivity.

In Spain They can only be seen in the Barcelona Aquarium and in the Poema del Mar de Gran Canaria, which has the largest collection of these animals in the country, with up to eight adult specimens.

Only in Lisbon can you see so many sea dragons together in Europe and, in the world, it is possible to see them in a few aquariums in the United States and Asia.

The sea dragon is unique in its species, like the horse, of the Syngnathidae family, and it is the males who take care of the eggs, something that occurs after a very special dance, usually in spring.

The birth of the sea dragons has been “great news”, not only for the aquarium, but for the island and the species, since “it was very difficult for it to happen”

As the person in charge of the dragons and the salt water area of ​​the Poem of the Sea explained, Alvaro Albela, they experienced this reproduction as “great news”, not only for the aquarium, but for the island and the species, since “it was very difficult for it to happen”.

Thus, it has been “very exciting and satisfying” for the whole team, as “a great reward for a job of several years.” And it is that the commitment of the Poema del Mar for these dragons has been clear from the first moment, since in the construction of the infrastructures a specific tank was created aimed at the welfare of this species so that they could breed in Gran Canaria.

This tank is more than three meters high, although sea dragons usually live in the background and only use the height for their reproduction dance, a dance in which the female passes the eggs to the male’s tail with movements in the that intertwine as they rise from the bottom to the surface.

In addition, the aquarium has its own cultures of the misidaceans on which these animals feed, the official marine emblem of South Australia, and which usually eat plankton, small crustaceans such as amphipods, mysid shrimp (Mysis) and larval fish (fish larvae) , among others.

This new generation of sea dragons born on the island is fed with care and affection with pipettes, selecting one by one these misidaceans that they take as food to adapt their size to the growth of the little ones.

As Albela has recognized, the seven employees in this area lived this moment with great enthusiasm, because in some way the sea dragons are “spoiled children” in the Poema del Mar because of the sensitivity of the animal and its peculiarities.

Sea dragons are very sensitive to changes, lights, noises and vibrations, which can greatly affect them.

These animals live in a very specific area of ​​southern Australia and they require very specific temperature, habitat, feeding and sensitivity conditions. Sea dragons are very sensitive to changes, lights, noises and vibrations, which can greatly affect them.

That they have had young and that they grow up healthy is a sign that “they are very comfortable” in the Gran Canaria aquarium, something that Albela and the team have been working on in detail since 2017 and that has not been achieved in any aquarium in Europe. .

In a few months, when the little ones born in June acquire the right size, they will be able to move to the main tank, on display for visitors.

Their colors, which range from yellows to blues, reds and violets in dots and stripes along their body, the strange morphology that resembles mythological dragons, their particular shape, which allows them to blend in among the algae with which they coexist and the peace transmitted by their floating are just some of the reasons why visitors allow themselves to be bewitched by this animal.

“Those who know this species and know how difficult it is to see them in an aquarium,” said the person in charge, “are impressed.”

Sea dragons are especially sensitive to sea pollution, the presence of microplastics in the waters and the increase in temperature as a result of global warming, since they live in very specific characteristics and in a reduced habitat whose destruction would have fatal consequences.