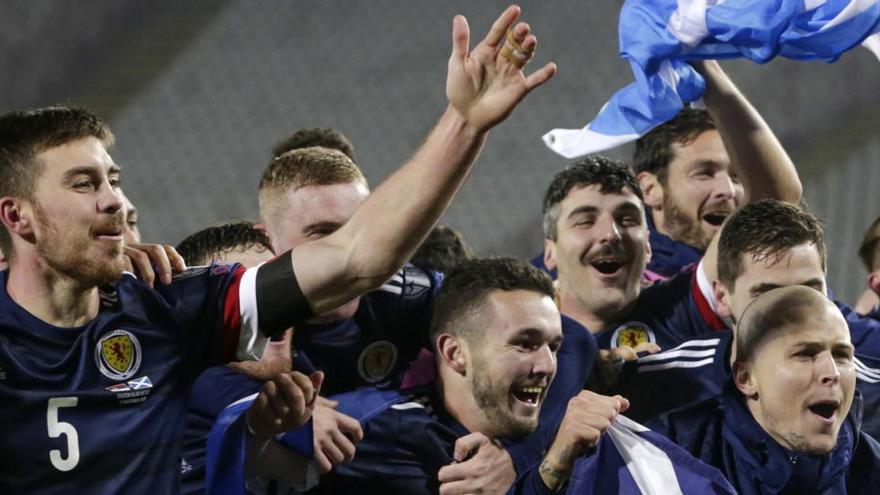 Selection of Scotland will play again, twenty-five years later, the final phase of a European Championship, after certifying this Thursday his classification for the maximum continental tournament to be played in the summer of 2021, by winning this Thursday by 4-5 to Serbia in the penalty shootout, in a play-off final that ended extra time with a draw (1-1) on the scoreboard.

Euro Cup in which Hungary, Slovakia and North Macedonia will also be there, which made history by securing its first participation in a major international tournament, defeating Georgia 1-0 in Tbilisi.

A solitary goal from the veteran forward Goran Pandev after 56 minutes of play allowed the Balkans, who had never before played a European Championship or a World Cup, to certify their presence in the continental event.

Pandev, who turned 37 last July, showed that he has not forgotten his goalscoring skills that led him to shine at Lazio, Inter or Naples, among others, culminating with a subtle touch a beautiful triangulation of the Macedonian team in the rival area. Goal that sealed the ticket of the Balkans for the final phase of a European Championship, in which Macedonia will face the teams of Ukraine, the Netherlands and Austria in the first phase.

If Goran Pandev was the main responsible for the classification of Macedonia, goalkeeper David Marshall became the hero of the Scottish team, after stopping Aleksandar Mitrovic the last and final shot of the penalty shootout. Marshall, what could not do anything in the Real Madrid player’s header goal Luka Jovic, who took the game into extra time by equalizing (1-1) in the last minute of regulation time Ryan Christie’s opening goal, played a decisive role in the round of maximum penalties.

The Scottish goalkeeper, who was about to save Jovic’s penalty, gave Scotland the victory and qualification, after guessing at Mitrovic’s final shot. A stop that allowed Scotland to return twenty-five years later to the final phase of a European Championship, which they had not played since far back in 1996.

Like then the Scottish team will be measured in the first phase with England, which starts as the great favorite of a group D, in which in addition to English and Scots are the teams of Croatia and the Czech Republic.

Equally agonizing was the triumph of Hungary, which will play the final phase for the second time in a row, after beating Iceland 2-1 this Thursday, in a match in which the Magyars lost 0-1 with two minutes remaining. A time in which the Hungarian team not only had time to equalize the contest, thanks to a goal from Loic Nego in the 88th minute, but to give definitely turn the scoreboard with both Dominik Szoboszlai in 92.

The young Austrian Salzburg forward planted himself, after traveling the entire Icelandic team’s field, in front of the area, to beat visiting goalkeeper Hannes Halldorsson with a powerful low shot. Spectacular so much that it allowed Hungary, which was already one of the pleasant surprises in the last European Championship in France 2016, in which it reached the round of 16, seal the ticket for a continental tournament, in which the Magyars will be measured in the first phase with the teams of Germany, Portugal, France, in the fearsome group F.

For its part, Slovakia, which will be one of Spain’s rivals in the final phase, had to wait until extra time to defeat Northern Ireland 1-2, in a clash in which the hosts forced extra time with an own goal from Milan Skriniar in the 88th minute.

A hard blow that the Slovak team knew how to recover from in extra time, as demonstrated by both striker Michal Duris, who put the final 1-2 at 110 minutes, at complete a counterattack with a powerful right hand. So much so that it allowed Slovakia, which already played in the last European Championship, in which they lost to Germany in the round of 16, to seal their ticket to a continental tournament, in which those of Stefan Tarkovic, who today made his debut as Slovakian coach, were They will measure with Spain, Sweden, Poland.