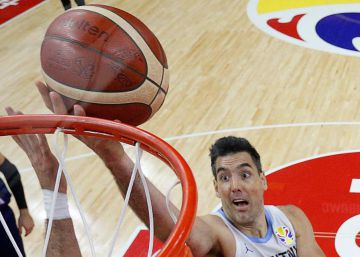 All the experts said that Argentina-France was going to play this Thursday, at the time at which the Serbia-United States. Those of Djordjevic were left with the little honrilla that was at stake between the two disinherited favorites of glory thanks to a rabid start (32-7 in the first quarter) that earned them the final triumph (94-89) in the first meeting on the road for fifth place in the World Cup. Meanwhile, his executioners watched weapons in Beijing for a semifinal duel in which this Friday (2:00 pm, Four) will clash two of the great titans of the championship, with arguments to get where Antetokounmpo and Jokic did not, for example.

On the side of the ring, Luis Scola, 39, statistical and spiritual leader of La Albiceleste and legal guardian of the vibrant litter of 90 that Campazzo heads. The other, Rudy Gobert, 12 years younger and 10 centimeters taller (2.16m), guide and guardian of the gala team that sharpens around Fournier. With its franchise players at the head of the mission, France seeks to link its second World Cup medal after the 2014 bronze, and Argentina green the laurels of the iconic Indianapolis Silver 2002 with the children of the golden generation.

There, 17 years ago, Scola was already watching the sun rise. In his fifth World Cup, his resistance is leading him to embrace legends almost by inertia. Before Nigeria, he became the second highest scorer in the history of the tournament, only surpassed by the Brazilian Oscar Schmidt. Against Serbia, he reached 31 victories in the World Cup and beat Brazil's Ubiratán Pereira and Yugoslavian Drazen Dalipagic as the player with the most victories in the championship. And, if he plays the two games that subtract his team in China, Scola will match Pereira himself as the international with more presences (41). “Optimize everything you play and wait for your moment because the experience gives you the timming just to appear. Always remain optimistic. He is a different player, he can do what he wants and always adds in this young team. Seeing him enjoy this way is to take off his hat, ”he praised Clarion his battle partner Fabricio Oberto. “It would be nice not to sleep for playing the final. Argentina believes in its potential, let's enjoy ”, completes one of the historical La Albiceleste.

Experience meets vigor in a generational battle, a pulse worth glory. Gobert, a specialist in aggrandize his 2.36 wingspan before the enemies of more shaft, arrives launched into the onslaught after devouring the USA Team. The Frenchman repeated five years later a memorable performance in the World Cup quarterfinal.

"This is not a miracle"

His 21 points, 16 rebounds and 36 valuation against the United States in Dongguan recalled another excellent performance, which he starred to eliminate Spain from its World. On September 10, 2014, at the Palacio de los Deportes in Madrid, the Jazz pivot figure finally hatched. That day, without Joakim Noah or Alexis Ajinca in the French ranks, France found the antidote to stop Pau Gasol with a young man who, with just 22 years and in his first major appearance with his selection, was able to capture 13 rebounds, one more than the Pau-Marc couple. His cap to the eldest of the brothers also became the icon of his presentation for the elite.
His decisive role in the selection of Collet is marked by his intimidating behavior and endorsed by statistics. In the 34 minutes that Gobert was on the track against the USA Team, France achieved 26 points of difference. In the six minutes in which he went to the bench to recover his breath, he lost by 16. The influence made data.

Myles Turner, Mason Plumlee, Brook Lopez, Khis Middleton … all the interiors of the US team were portrayed before the most NBA of all who stepped on the floor in the first official defeat of the Americans in 13 years, since the 2006 World Cup. China, Gobert averages 12.7 points, 9.7 rebounds, 2.2 assists and 2.3 blocks in less than 27 minutes. He is the best rebounder of the four semi-final teams and also leads the section of the blocks (only surpassed in the total by 3.2 of Salah Mejri, eliminated in the first phase). "The victory against the United States It will become one of the biggest games in my career and one of the biggest for French basketball. But it won't mean much if we don't win the gold, ”Gobert said.

“When you first tell me that winning Serbia was a surprise or a miracle, I'm leaving. This is not a miracle, there were 12 players and a whole group that we thought we were going to be here. It's all we needed, to believe, ”Luis Scola launched after the victory against Serbia and qualifying for the semifinals. Now, heading for gold, two feats collide, two titans collide, in a generational duel on the way to the end of Sunday.