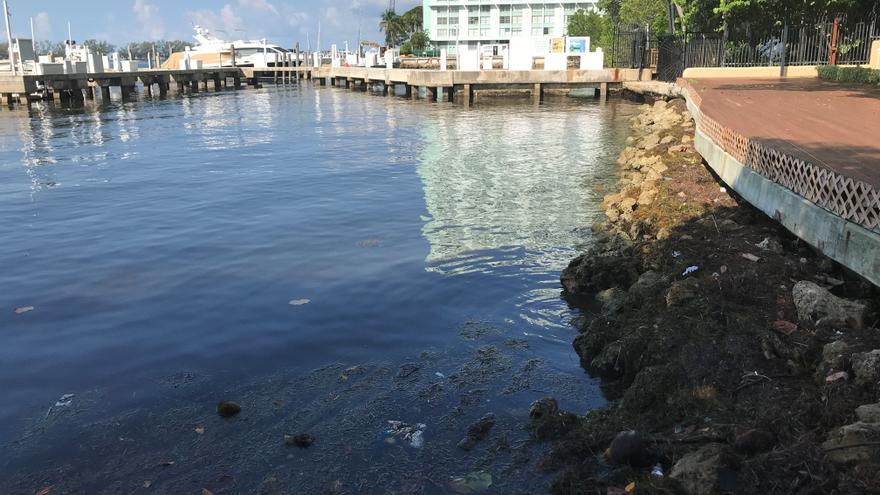 Miami, Jul 28 (EFE) .- Biscayne Bay, an ecological treasure located in Miami-Dade County (Florida, USA), is in serious danger due to the contamination of its waters, surrounded threats that scientists and filmmakers in Miami are now alerting the population and authorities about.

Raising awareness about the danger is the end of the winning videos of a contest that highlights the wonder of this marine environment with the involvement of two scientists and a "mermaid" who lives in the bay.

This is the Save the Bay initiative, a contest for public service announcements in video format of about 60 seconds from which five filmmakers have been winners who contribute their artistic vision to "save" the Bay of Biscay.

The five winning videos in the contest organized by the Oolite Arts artistic center with the support of the county authorities are exhibited today with the presence of their filmmakers, who have been deeply involved in the defense and protection of this beautiful bay of 56 kilometers of length and width 13 ideal for water sports.

"Our lives are deeply intertwined with the bay: we are one and the same," Iranian-born American filmmaker and scientist Shireen Rahimi, based in Miami, told EFE.

Rahmi's video, "What happened to the Bay?", Proposes an "emotional and physical connection with the ecosystem of Biscayne Bay and the role it plays in the story of our lives," adds the also diver and photographer. Degree in Environmental Sciences from the University of Miami (UM).

She assures that the filming was a "labor of love", an experience marked both by the beauty of the bay and by all the people who helped make it happen: from the expert cameraman in the use of drones to the owner of the pier from where she jumped. to the water for underwater filming.

The shady part is the state of this ecosystem so diverse and abundant in corals, seagrass, mangroves and with more than 120 different species of animals in danger.

"The bay is suffering. The seagrass is dying and there are very few animals left", a situation that could be reversed, he says, "if we stop contaminating it with fertilizers and pesticides, the constructions on the coast or the impact of the cruise ships."

The alarms went off in August 2020, when hundreds of barracudas, eels, shellfish and all kinds of fish were found floating dead southeast of the bay, followed by a bloom of algae.

Scientists and experts from the Fish and Wildlife Conservation Commission (FWC) concluded that these deaths were the result of low oxygen levels due to the overload of nutrients (nitrogen and phosphorus), coming from septic tanks, and a higher temperature. high than usual in the waters of the bay, among other factors.

In the opinion of Piero Gardinali, director of the Institute of the Environment at Miami International University (FIU), factors such as "rapid urbanization, pollution, rising temperatures, water management, rising sea levels and loss of important habitats affect the waters of the bay. "

Asked by Efe about the importance of this unique natural environment, Gardineli was blunt: "There is no Miami without Biscayne Bay", since the "livelihood of South Florida is linked to the health of its coastal ecosystems."

But, despite the pollution, its rich biodiversity even allows the existence of a black "mermaid", as is shown in the video of the American filmmaker of Dominican origin Helen Peña, another of the winners of the contest.

A black mermaid that emerges from the bottom of the ocean to "wake up" in a story with a poetic text that alerts us to the urgent need to "protect our magic, protect life, protect the bay".

"The Bay of Vizcaya represents for me the sacred life, a place that was inhabited by the Tequesta tribe and, at the same time, a microcosm of the type of climate disaster that is happening all over the world," he emphasized to Efe Peña.

"THE TIME TO ACT IS NOW"

In "Video Letter", by Alexa Caravia, a retired marine biologist tells her unborn grandson about the sad decline of a privileged ecosystem that everyone must take care of.

This "declaration of love" to the bay is also a "call to action" as the "public reflects on their responsibility to the bay by becoming aware of our impact on a vibrant and complex ecosystem," says Caravia, producer , filmmaker and director of photography.

For this documentary work, Caravia immersed herself in the Wolfson Archive at Miami Dade College (MDC), where she discovered that for decades "there have been alarms and signals that have been ignored."

"My fear is that if we do not act now, we will soon find ourselves at a point of no return having done irreversible damage to a natural environment that makes life in Miami so magical," he said.

According to the environmental science website Mongabay, seagrasses have declined by as much as 90% in some areas of the Bay of Biscay and in others they have completely disappeared.

A serious problem, if one takes into account that seagrass is vital as a habitat and food for many fish and mollusks, in addition to extracting nitrogen and phosphorus from the water and releasing oxygen.

For this reason, as Gardineli insists to Efe, "the time to act is now. What is happening in the bay is a cry for help, a call for attention and action", in order to continue celebrating the wonder that is the Bay of Biscay.