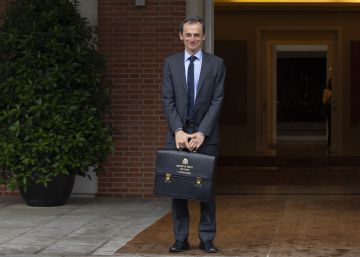 Spanish science has been in a crisis that seems to have no end for more than a decade. The public investigation system has lost more than 20,000 million euros since 2009. Although the economic recovery came years ago, laboratories have barely felt the improvements. Public investment in science is stagnant at levels similar to those of 2012, largely due to political instability and the inability to approve new budgets.

Among all this darkness, the scientific community saw one of its historical claims fulfilled in the summer of 2018 with the appointment of Pedro Duque at the head of a ministry that combined the competences of science, innovation and universities, three areas that he considers inseparable. The new Government that Pedro Sánchez profiles is now taking away that conquest to create a Ministry of Universities assigned to the sociologist Manuel Castells, a decision that has achieved a unanimous rejection of scientists, rectors and leaders in innovation.

"These powers can not be separated, doing so can cause a fight between these two ministries for resources already scarce," says physicist Perla Wahnón, president of the scientific societies of Spain (Cosce). “It is also a decision contrary to what we see in the main European powers, in the EU executive itself and that detracts political weight from science in the Council of Ministers,” adds Wahnón. "It's bad news for Spain," said in a joint statement sent last Friday by Cosce, the rectors of public universities, scientific-medical associations and Severo Ochoa centers and units, the elite of scientific research in Spain.

The key is now in the detailed structure of the new Government, which will define how many powers and budget the Duke Ministry loses in favor of Universities. "The separation of universities and science is not the most recommended model, but it is not something new," explains Jorge Barrero, general director of the Cotec Foundation. "These powers have been separated for 14 of the last 20 years, first in the Aznar Government, then in the Zapatero Government and since 2012 in the Rajoy Government," he said. What is unprecedented is that of a ministry of universities separated from education and science, he adds, possibly because most university competences are transferred to the autonomous communities and there is very little left to the State.

In Spain around 70% of scientific research is done by universities, but the state funding they receive for this depends on the National R&D Plan managed by the Ministry of Science and is granted based on a competitive competition , hence the suspicions of the research community before possible Solomon divisions of these funds. "Breaking this unique bag to take part of this money to universities would be irresponsible," says Barrero, who sees it more feasible to give Castells a ministry in charge of lifelong learning that manages Vocational Training, currently attached to Education , and job training courses that depend on Work.

The challenges of the next legislature

"Give me 700 million and I will tell you how many scientists can return to Spain," declared Pedro Duque to EL PAÍS In November 2018, four months after taking office. That was an impossible wish because the budget pact reached by the Government of Pedro Sánchez and Podemos barely contemplated raising the science budgets by 273 million euros. That pact never materialized and the budgets are still frozen and extended, but Duke can say that he fulfilled one of his main promises: to approve a package of urgent measures for science that ended the previous intervention, the bureaucratic work that was suffocating public research centers to the point that scientists couldn't Or buy chairs.

In this new term, the main problem will be money again. In 2018, investment in R&D rose a shy 6%, which is explained by the greater investment in the private sector. Scientists now ask for a public counterpart, but without going crazy. They do not even ask for Spain to spend 2% of GDP on R&D, something that most parties have in their program, including Podemos, but that scientists and experts see it totally unfeasible in the short span of four years.

"If this legislature were able to double the budget of the National Plan, which represents a total of about 350 million euros, it would be a great achievement," he said Luis Serrano, president of Somma.

This program is bread and salt for the vast majority of scientists in Spain and especially nourishes the middle classes of research, those who do not have the resources or human capital to handle large projects, but who make up the critical mass of the system of public R&D. This group faces in this legislature two years of cuts of up to 20% due to the new calendar of calls promoted by the Ministry of Duke and that has helped the scientific community, especially to cancer researchers grouped in the ASEICA association. “Our position is to wait and see,” explains Xosé Bustelo, president of this organization. “The minister has so far spoken more than he has done. Hopefully in this term the batteries will be put to solve the pending problems that our suffered R & D & I system has ”, he adds.

"Almost everything remains to be done," says Pablo Jiménez, spokesman for the Federation of Young Researchers. "The R&D system is dismembered and needs an important money injection," he says.

Despite the measures against the bureaucracy approved by Duke there are still many present. One of them, explains Álvaro Rodríguez-Lescure, president of the Society of Medical Oncology, is that under current regulations cooperative groups such as cancer network research centers, cardiovascular or respiratory ailments, among others, are not “tax subjects can be financed, which prevents them from attending calls for public funds, ”he says. "Another objective for Duque's new mandate should be to create a specific item to conduct independent clinical trials that, due to their objectives, are not profitable for the pharmaceutical industry but that can bring great benefits to patients and the biomedical community," he explains. These are, for example, studies designed to reuse drugs already approved and without a patent or to carry out studies that make it possible to prevent already cured cancer patients from going through the usual protocol and receiving a year of additional treatment.

Another task of the Ministry of Science will be to find a solution for the so-called Cajal Legacy: 22,000 pieces - letters, drawings, manuscripts, photographs - of Santiago Ramón and Cajal that have been stored in boxes in a basement of the Cajal Institute since 1989, a center of the Higher Council for Scientific Research (CSIC) located in Madrid. The scientific community has been calling for years to create a Ramón y Cajal National Museum, dedicated to the winner of the 1906 Nobel Prize in Medicine, father of neuroscience.