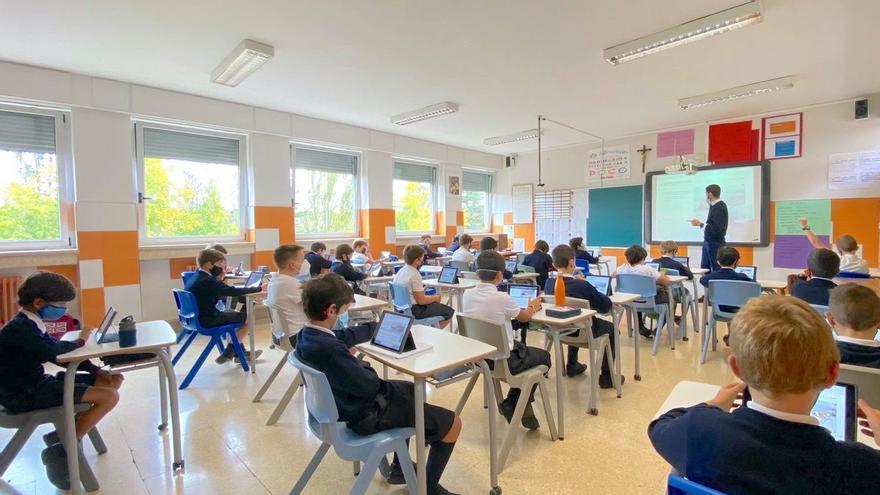 It is a millionaire business, although the profits afterwards are not counted in euros. Dozens of private centers that segregate their students by sex took advantage of the door opened by the Wert (Lomce) Law of the PP to benefit from the concert system and benefit from public funding. Thanks to this, they have received hundreds of millions of euros in grants in recent years, especially in communities such as Madrid, Catalunya, where 311 million euros have been paid to segregating schools in ten courses, or Euskadi and Navarra.

Until the Lomloe (Celaá Law) put a stop and forced all centers that receive public funds to practice coeducation and do not separate your students. It establishes it thus in its twenty-fifth additional provision: “The centers supported partially or totally with public funds will develop the principle of coeducation in all educational stages (…), and will not separate the students by their gender”. Public funding was at risk.

But the segregated concerted school resists. He fought and won the first decisions in this regard in Catalonia, and has fought, and is also on the way to winning, for the second time, in the Constitutional Court, which is about to propose that this provision of the Lomloe be invalid and force the Government to finance segregation by sex, after a Vox appeal. The TC already did so in 2018, when it rejected an appeal from the PSOE before several articles of the Lomce, among which was precisely the permission to arrange this type of centers. An oxygen balloon for these schools, both then and now (if confirmed), which according to their public accounts are losing money in recent years.

What are these centers? Who do they belong to? In the absence of an official list, the vast majority of them are from Opus Dei or at least are very close to the Work. The Efe agency counted about one hundred schools that segregated by sex two years ago, of which 67 had a concert. There are conglomerates of schools, such as the group Fomento de Centros de Enseñanza (with centers throughout Spain and to whom a third of these segregating schools belong) or those of the Institució Familiar d’Educació de Catalunya, based in that community, and the Balearic Islands; There are also individual centers, such as the Los Tilos School, exclusively for women, in Madrid. Your business does not seem economical, at least from the accounts that infocif.es collects from some of them. This last center, for example, registers losses in the last two years, and those that present benefits can be considered small for the size of the group.

The Generalitat is one of the administrations that has most fervently embraced the prohibition of arranging schools that segregate. Or at least he has tried until, literally, he ran into the Church, which resorted. Specifically, several schools belonging to the Institució Familiar d’Educació, an educational group that has 13 schools between Catalonia and the Balearic Islands to which almost 8,000 students attend and where “the message of Opus Dei is a core feature of the identity” of the group, according to its own website. Not all schools in this group segregate, however: some have merged to offer mixed education due to the lack of students, such as the Institució Igualada, which only separates them in ESO (and brings them back together in Baccalaureate).

The Government tried last year to withdraw the concert from several of these centers, but a resource from them proved them right: the Superior Court of Justice of Catalonia (TSJC) argued that public funding could not be withdrawn because schools would lose income unexpectedly and it would also cause harm to children, who would have to change centers if they were no longer free. Not content with prohibiting withdrawing the concert, the TSJC forced the Generalitat to extend it for six more years.

Now the Generalitat returns to the load. With the Lomce still in force, he could not, but they believe in the Department of Education that now the Lomloe protects them. And this past week has announced that it will not renew the concert for the next year to the 11 schools that continue to segregate, although he will have to keep him in Primary because of the judicial setback last year. This decision will also depend, at least in part, on the TC’s decision regarding the Vox appeal.

Educació calculates that this measure will save about 15 million euros. It is, taking a thick account, almost half each year of the 311 million paid by the Government in the last ten years (31.1 a year) to private centers that separate male and female students, according to data from the Executive. Slightly less than 50% of this total, 137.8 million euros, has gone to schools of the Institució Familiar d’Educació group, which has three centers that have received more than 30 million euros in this period: La Farga, in San Cugat, La Vall, in Sabadell, and the Tarragona Institution. According to the status of their accounts published in infocif.es, the group is maintained thanks to these public subsidies: in 2019 they earned 126,406 euros and the previous year they had lost 267,031 euros.

The situation in Madrid is exactly the opposite to that of Catalonia: support from the administration, which is preparing to pass an autonomous educational law to shield the concerts, including those from centers that segregate, and boycott Lomloe as much as possible. The Community allocated between 2015 and 2020 about 200 million euros to finance these private schools that they separate by sex (differentiated education, they like to call it).

The community has a special presence educational group Promotion of Teaching Centers, which also operates outside the region. This giant has 32 centers throughout Spain, seven of them in Madrid, and has the Villanueva University Center, which has also been graceful by the Government of the community with a license to become its own University and stop depending on the Complutense.

Fomento, as this group is known, educates about 23,000 students, and although it does not specify it on the web – unlike other centers, which name José María Escrivá de Balaguer, founder of the Work – it also has connections with the Opus and uses for its ideology all the typical terminology of this movement. To this group, which does not have their accounts published for free access, belong centers such as Las Tablas-Valverde, which received 3.9 million euros in public subsidies in the 2019-2020 academic year, according to Cadena Ser, or Fuenllana, a center female, who received 3.8 million euros for the concert.

In addition to those in this group, Madrid has individual schools, such as the Tajamar, inspired by José María Escrivá de Balaguer himself or the Retamar, where the mayor of the capital, José Luis Martínez Almeida, studied and also linked to the Work.

In Navarra, the Department of Education of the Provincial Government is studying withdrawing the educational agreement to the private schools of Opus Dei Irabia-Izaga and Miravalles-El Redín, which exceeds 12.5 million euros, after they have not adapted in mixed classrooms all educational levels this school year as they committed to do, reports Sol Gragera. In fact, the management of the centers has only mixed boys and girls in Primary classrooms in an attempt to progressively adapt to the Lomloe and to the provision of the 1998 provincial law that regulates the financing of these centers.

The four schools have about 4,500 students and 350 teachers. Miravalles-El Redín belongs to the group Fomento de Centros de Enseñanza, while Irabia-Izaga is a corporate work of Opus Dei. The four are legally united in two to meet the requirement of the 1998 provincial law to receive concerts. If the concert is terminated on August 31, 2022, the Government of Navarra will analyze continuing to pay the centers through a “reasoned agreement”, as allowed by an additional provision of the Regional Law 11/1998, and “to the only Effects of guaranteeing the continuity of the currently enrolled students, until the completion of the compulsory educational stages they are studying, “according to the Minister of Education. That is, they will value continuing to pay them even if it is proven that they have broken the law.

In Euskadi there are six centers with concerts that separate their students by gender: Arangoya in Bilbao, Gaztelueta in Leioa, Ayalde and Munabe in Loiu, Eskibel in Donostia and Erain in Irún. All of them are from Opus Dei or belong to the COAS employer, close to the prelature. The Basque Government paid 11.5 million euros to these schools last year, including Gaztelueta, famous these past months for having protected and defended a teacher who abused a student and was eventually sentenced to two years in jail.

The Minister of Education, Jokin Bildarratz, said last year that the Basque Country will apply the measure to stop financing these schools that was introduced by Lomloe. “In that sense, what we will do is comply with the law. It is an organic law, it is a basic law. And being a government, in addition, we always understand that we have to work to deepen gender equality, in a balance between sexes, in the true equality between male and female “, he explained, in what would mean a 180º turn from the position of his predecessor, also from the PNV, who argued that” education disaggregated by sex is not discriminatory. “

These are some of the main groups or schools that separate their students by gender and also have a concert. Outside of this category for not having a concert, but which also segregates by sex, the Attendis group deserves special mention, also linked to Opus Dei and which operates mainly in Andalusia and Extremadura, with 21 centers.